My musical taste (already salivating for change) went through a complete transformation in 1983 during my first month of college. Already I had dabbled with U2 and the Police, but I was skeptical about the overall musical genre that was shaping up to be called “alternative.” I had just read Rolling Stone magazine and article where they announced that “Murmur” by an obscure Southern band called R.E.M. was its album of the year.

My experimental juices were flowing so I head to nearby and the funky record store in the downtown (located in a musty basement).

I was anxious with my purchase as I headed back to my dormitory. After all, I was the guy who wore a Japanese komodo over a tore Van Halen concert t-shirt at the first dorm party. I had a reputation to maintain.

Peeling off the plastic wrapper, I carefully slid out the disc (this was before CDs and MP3s and I miss the sharp celluloid reek of a new album), and placed it ever so gently on my record album. I sat down and listened to the needle bumped and grind its way to the f 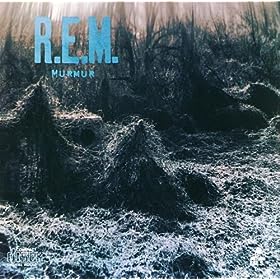 I’ll never forget the moment. Alone in my new dorm room (with two brand-new bunk beds with desks beneath them), I sat at my desk chair with one foot propped up on the desk. The wood on these mammoth structures was bright blond and still smelled like wood stain. My roommate had placed a St. Pauli Girl poster on the wall and the pig-tailed beauty smiled down at me seemingly nodding in approval to the music on the turntable.

The late afternoon September sun streamed through the already dirty windows and splashed onto my feet. The dormitory was a hive of activity behind the closed door: shouts, doors slamming, toilets flushing, laughter, music, and footfalls in the corridor. All of it blended into the background as I listened to R.E.M.

Here was a cerebral brand of music – quieter, yet with a punchy guitar sound. The lyrics were ethereal and drifted through the songs like a ghostly narrator of human emotions. Melodic and moody, the music struck me as so much more complex than the heavy-metal that defined my high school years. The music made me look at my surroundings and myself differently than I had been only moments before.

I knew I was hooked – and that my experiments with listening to U2 and Police – had finally sunk in. R.E.M. became a defining band for me – and an important one in my personal musical growth. “Murmur” taught me that music could have a gentle side – an intellectual punch – and that singers didn’t have to scream to make a point.

Read our musical memory about U2 here