George A. Romero discovered a universal truth: Zombies rock. What’s not to love? Shambling, animated corpses with a taste for living flesh? Desperate survivors with trigger happy fingers decapitating said zombies with rusty machetes or well-aimed head shots? Zombies piling up like chords of wood? And the screaming! 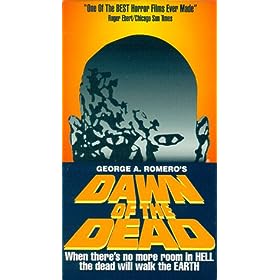 Romero’s original “Dawn of the Dead” made in 1978 is a lot of things: horrifying, taboo-shattering, gory, and disturbing. It’s also horror camp at its finest – skewering the mass consumer culture of the in our most shallow of decades: the 1970s.

Romero has a gleefully good time with his pack of survivors holed up in an indoor shopping mall. The slow-moving zombies that bang into the display cases or stumble up the escalators aren’t so far removed from normal everyday mall shoppers – at least according to Romero.

Why do the zombies congregate at the mall? “Some kind of instinct. Memory, of what they used to do. This was an important place in their lives,” one of the characters informs us.

Yeah, even dead we like buying stuff at the mall.

But one thing the Romero film is not? Scary.

That’s one reason why we’re also fans of the much maligned 2004 remake by director Zack Snyder. That’s a sacrilege in many quarters, but for pure fright – Snyder tops Romero. That’s the truth. Romero’s low-budget wonder is a classic – no doubt. It can be uncomfortable to watch, but there is more dark humor than actual chills. Romero focused his film on his wicked wit: satire instead of terror.

Snyder isn’t interested in delivering a sardonic message. He wants to scare you. And damn it if he doesn’t. His zombies – like the times we live in – are fast. There’s no shambling here – but straight out sprinting.

The gem of Snyder’s movie is the opening 10 minutes. It may be the most frightening sequence of any horror movie made over the last 20 years. It has a disjointed, sour flavor as if the orange juice you drink every morning has been spiked with cyanide.

Sarah Polley plays a nurse named Ana. She’s at the end of a difficult shift at the hospital. All she wants to do is go home. Traveling home over washed out streets in a bland suburban tract, she arrives home for “date night” with her husband. They make love in their messy, little bed in their messy, little house.

Then it all goes to hell. 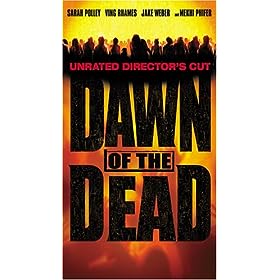 The little girl next door wonders in and lo and behold the lower half of her face has been chewed off. She creeps into the bedroom and Ana’s husband jumps up concerned. But before he can react, she takes a bite of flesh out of his neck.

Ana locks the little girl out of the bedroom and then has a grueling life and death struggle as her husband dies and then reanimates as a zombie. It’s bone rattling violence and by the time Ana gets into her car – her neighborhood, her world is in chaos.

While the overall Snyder’s film doesn’t quite live up to the original (and the characters make some ridiculous decisions – especially at the end), Snyder delivers a zombie movie that belongs on the list of greatest undead flicks ever made – with Romero’s original and the superb “28 Days Later.”

The two movies follow the same premise – but are very different movies. That’s why you can enjoy them both: turn to Romero for the horrifying satire (you can often overlook the rather awkward acting) and then lean on Snyder for some in-your-face terror (and for using Johnny Cash's "Man Comes Around" as an opening number).


Read why we love the "Bourne Supremacy"

Anonymous said...
Yikes! Just about the only thing that keeps me from completely freaking out about zombies is that I can trust them to shamble slowly along, and he wants to take that away from me?! Brilliant, but evil.
April 03, 2008 5:37 PM

GFS3 said...
Yeah, I'm a bigger fan of the shambling zombies. It makes "me" think that I actually could survive if the zombie plague comes. But fast zombies? We're all dead!

And the original needs to be watched in context. Some of the acting isn't up the snuff -- and not what we expect these days. But it is gruesome fun.
April 04, 2008 8:55 AM
Post a Comment
<< Home
Advertisements
DaRK Buttons