Radio on. Car sailing along the pavement. The music blows through the windows like the summer wind.

And then one of those songs comes on.

Buzz kill music. The mood implodes and you nearly drive off the road trying to turn off the damn radio. You are experiencing a terrible rock song. A song that makes you cringe.

These tunes are difficult to identify, but everyone has them. They are usually bygone hits – so they continue to get radio airplay. They even have die-hard fans (who clearly have some rare form of brain damage).

DaRK PaRTY has identified 12 of these nasty numbers. Here are the some of the songs that have us trembling in disgust.

Could there be a more talented duo than McCarthy and Wonder? Could there be a song so lacking in subtleties that is like a frying pan to the side of the face? Is the song about piano keys or about race relations? Well, gee, maybe both! The song reached number one in both the UK and United States in 1982.

Lyric Sample: “Ebony and ivory live together in perfect harmony/ Side by side on my piano keyboard, Oh Lord, why don’t we?”

It’s easy to pick on boy bands when they record songs like 1989’s “Hangin’ Tough.” Drum machines and electronic keyboards have never sounded so tinny. It’s also amusing to listen to fashionable young punks who don’t shave yet try to sound tough.

There’s a lesson for all of us in “Rhinestone Cowboy.” If Neil Diamond has already recorded a song: it should be avoided at all costs. Clearly Glen Campbell ignored this sound advice when he recorded “Rhinestone Cowboy” in 1975. It became both a country and a pop hit and more than 30 years later it simply won’t die.
Lyric Sample: “Like a rhinestone cowboy/ Getting cards and letters from people I don't even know/ And offers comin' over the phone.”

This 1976 cover song hit number 4 on the charts. It is a song – literally – about two muskrats falling in love. There are sounds – embedded in the song – of two muskrats making love. This song will make you want to kill all muskrats.

Lyric Sample: “Nibblin' on bacon/ Chewin' on cheese/ Sam says to Suzie/ Honey, would you please be my Mrs/ Suzie says, yes, with her kisses.” “Oops, I Did It Again” – Britney Spears

The video features a 20-something astronaut (he must have had intense training when he was in elementary school) on Mars who stumbles on a Britney CD. Now we know. “Oops, I Did It Again” killed all life on the Red Planet.

Lyric Sample: “I cry watching the days/ Can't you see I'm a fool/ In so many ways?”

The Son of Sam serial killer allegedly said “Rich Girl” was one of the motivators for his murderous sprees. Enough said.

Lyric Sample: “You can rely on the old man’s money/ It’s a bitch girl but it’s gone too far/ Cause you know it don’t matter anyway/ Say money but it won’t get you too far.”


“Paradise by the Dashboard Light” – Meatloaf

We groan when this song comes on the radio. It’s not only horrible – it’s long. Sex as a baseball game! Wow, what a concept. And let’s face reality here: who would have sex with the overweight Meatloaf in the backseat of a car?

Is this an original song? It sounds like a pop by numbers tune – bits stolen from every bad song ever recorded. But it’s also stalker creepy as Aiken pines to watch his girl (boy?) friend without her/him knowing it. This 2003 number has become absolutely unlistenable. Nice hair, Clay.

Lyric Sample: “Whatcha’ doin’ tonight/ I wish I could be a fly on your wall/ Are you really alone/ Who's stealin' your dreams?” 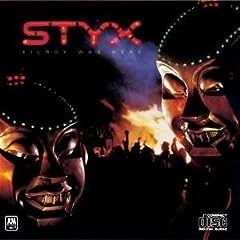 It’s a futuristic epic! It’s a sci-fi rock opera! It’s a car commercial jingle! It’s got a robot singing in a robot voice! And look Styx (possibly the worst band of all time) can dance like robots!

Lyric Sample: “I'm not a robot without emotions-I'm not what you see/ I've come to help you with your problems, so we can be free.”

We can’t hit the off button fast enough when this 1975 song comes on. Awful! Glam rock has never been so pretentious. Freddy Mercury’s stream of consciousness nightmare is worse than fingernails dragging down the side of a chalkboard.

Lyric Sample: “I see a little silhouetto of a man/ Scaramouche, scaramouche will you do the fandango-/ Thunderbolt and lightning-very very frightening me.”

Parodies bomb when they don’t work. Case in point: “Illegal Alien” is supposed to be a satire about the difficulties of being a Mexican immigrant in the U.S. But instead it’s just offensive. A happy, bouncy pop number that is probably very popular with members of the KKK.

Lyric Sample: “It’s no fun/ Being an illegal alien.” (see video above)


“With You” – Jessica Simpson

Another pop flop that sounds like it was stolen from various discarded hits over the decades. It’s disjointed. It’s awkward. And it was a hit in 2004. What the hell is wrong with us?

Lyric Sample: “Cuz I start thinking about it/ I almost forgot what it was like/ To know what love feels right.”


The Sexiest Song Ever Recorded?

Highway to Hell: The Best of AC/DC

Cialis Online said...
I agree with you because I think that “Oops, I Did It Again” and “With You” are the worst ones, so I should say something they have stupids songs but they're so hot.
May 30, 2011 11:30 AM
Post a Comment
<< Home
Advertisements
DaRK Buttons