(Quick fire reviews of the books we’ve been reading. A “cracked-back” is what happens to the spine of a new book once you’ve thoroughly devoured it. Please feel free to add your own list of recommendations in our comments section.)

Down to a Sunless Sea

By Mathias B. Freese

This collection of short stories by Mathias B. Freese gets points for the way the writer insightfully glares into the lives of the characters – a group of troubled (and sometimes mentally ill) people. Freese uses stark and penetrating language to accomplish that task. But the real question is if this collection can really be considered short stories. I’d argue not. There’s nary a plot to be found in the collection – as each of the pieces focuses on character building. These are character sketches – not stories. Most, in fact, are internal monologues. Yet some of the sketches work well. “I’ll Make It, I Think” features the powerful voice of a handicapped boy trapped in his deformed body. “Little Errands” is an amusing take on an anal retentive man obsessed with mailing letters. Yet overall, the collection feels too internal – as if the book is trapped inside a room without any windows. Too much of the action is thinking. There needs to be more external action – interaction with other characters, movement, and fluidity; more setting, description and dialogue. If you’re a fan of character – and bizarre, damaged ones then you’ll want to get a copy of “Down to a .” But if you like traditional short stories, then you may want to pass. After all, there’s nothing wrong with a strong plot every now and then.

How on Earth did the 13 Colonies ever win the Revolutionary War against the ? It was a lopsided match-up from the start. Yet, somehow, the American rebels pulled it off. David McCullough’s “1776” gives us a glimpse into the first full year of warfare – which may have been the bleakest for the new country. The Army was made up of misfits (mostly from New England) and the citizens were starkly divided (especially in that Tory stronghold of ). McCullough takes us from the Siege of Boston to the Battle of Trenton (the turning point for General Washington and his Continental Army). McCullough tells us the story from the perspective of Washington, his generals, his officers, and his soldiers (but there are parts from the British point of view as well). What we get is history as a suspense novel. The action is fast. The characters are larger than life. Although this is a story that most Americans have heard a thousand times (starting in elementary school), McCullough gives it a fresh coat of paint and oftentimes it’s easy to forget that the action had already happened. That’s the sign of a good historian and a powerful writer. It’s amazing that the Colonies ended up winning the Revolutionary War. The British – by nearly every barometer – should have won. But they didn’t. McCullough shows us why through the eyes of the determined Washington and his troops.

The Worst Hard Time: The Untold Story of Those Who Survived The Great American Dust Bowl 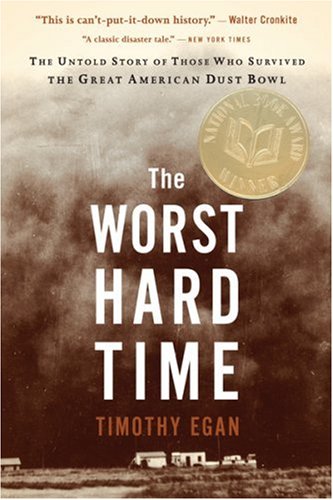 What was the worst environmental disaster of the 20th century? Would you believe the over-farming of the southern that led to the enormous dust storms of the 1930s? The biggest of these storms on April 14, 1935, which went down in history as “Black Sunday,” completely blocked out the sun and contained more tons of dust and dirt than was removed to dig the . All of it airborne – clogging lungs, blinding cattle, burying homesteads, and turning the into a lunar crater. Through diary accounts, personal interviews, and newspaper stories, Egan paints a vivid and personal picture of the people and places most affected by this ecological disaster. The book is fascinating – and penetrating. It’s hard to imagine why so many people of , , , , and remained behind on what became a blistering hot patch of dirt. But they did. Egan’s account is one of the best written historical novels, I’ve ever read. It’s fast, it’s detailed, and it packs an emotional kick. It’s like stepping into a time capsule. The one weakness of the book, however, is Egan’s failure to really put the disaster into the context of today. It would have been interesting if he spent more time on exploring how the disaster shaped the lives of people living on the now. But otherwise, “The Worst Hard Time” deserves your attention.

David said...
I read this book. It's a very informative and interesting story. Your writing technique is impressive and enjoyable to read. I encourage you to publish more information about this article so I can gain more knowledge on this topic. Now it's time to get Roofing Services in Wayne for more information.
January 23, 2023 1:05 AM
Post a Comment
<< Home
Advertisements
DaRK Buttons