An Interview with Ken Bruen, the Duke of Hard-Boiled Crime Noir

(Author Ken Bruen helped launch a new era in hard-boiled crime fiction. His novels are not for those who like linen napkins with their tea. His villains are mean bastards and his heroes generally will do anything it takes to get the job done. This recipe has worked wonderfully for the Irish-born writer as he’s won the Shamus Award and he’s been nominated for just about every damn mystery/thriller award in the business. He’s best known for his Jack Taylor series – noir crime books that are set in . is a disgraced ex-cop who occasionally works as a private eye. Don’t piss him off. DaRK PaRTY caught up with Bruen recently to see what he’s been doing and to pick his brain about his fiction.) 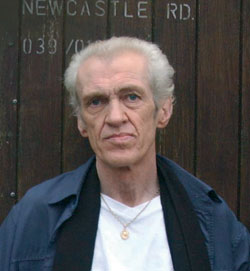 Ken: Mean as hell, black as coal and uncompromising in every sense, not for the Booker readers

DP: You are the author of the acclaimed Jack Taylor series. Jack is a fallen cop with substance abuse problems. Can you give us your personal opinion on Jack? What do you like about him and what do you dislike about him?

Ken: I like that he sees justice as being dispensed in alleys, especially with the scum of the earth walking free from so called trials every day of the damned week, I like his reading choices and what I hate about him is fixation on the past, his very, very short fuse and his inability to form a real deep caring relationship. A lot like me own self, in fact, alas and more's the damed Irish-ed pity, for us both.

DP: plays an enormous role in many of your books. The country has undergone so much change in the last two decades. Can you tell us why your homeland is so important to your literature?

Ken: Firstly, we've only been a free country for a mere number of years and then we went from dirt poor to one of the richest countries in the world and went mad and this has to have an enormous influence on the literature of the country, it is wondrous territory for a mystery novelist with all the outriders of simmering racial tension with the new immigrants, the huge influx of drugs that have flooded the country and the greed that has overtaken Catholicism as our new faith.

DP: You’re part of a literary circle that includes Jason Starr, Brett Easton Ellis, and Dennis Lehane. What exactly is a literary circle? Do you meet regularly? Does the group have a name? And where do you all generally meet and what's the topic of your conversations?

Ken: I always saw a literary circle as along the lines of Dorothy Parker and meeting in the Algonquin and drinking lights out, the only writer I regularly sit at a table with is Jason and we am (to) drink sensibly, sometimes... Jason and I are usually planning our next book for Hardcase and wishing to hell we could cast one of our books as a movie, we lie a lot about advances and money in general and bitch about… the NYT best seller list.

DP: What writers have had the most influence on your work and why?

Ken: James M. Cain. Charles Willeford, Horace Mc Coy, because they wrote fearlessly, with a very savage twisted sense of humour and with a ferocity of style that is so immediate, it's like a slap in the face and a kick in the balls, Derek Raymond too.

Read some of our other author interviews:

Bybee said...
OK Dark Party...you can rest on your laurels for exactly one day because you've performed a valuable service, making bookworms aware of this exciting writer. Thank you!
September 19, 2008 8:12 AM