Back in December, we listed our “8 Coolest Sci-Fi Flicks” and got some heat for not including “Blade Runner” (1982) on the list. We remembered Ridley Scott’s adaptation of Philip K. Dick’s science fiction classic “Do Androids Dream of Electric Sheep” as being a disappointment – as well as a bit heavy-handed.

We recently revisited “Blade Runner” to see if the sands of time had softened our opinion of the movie. But we also wanted to see if Scott’s director’s cut version of the film would improv 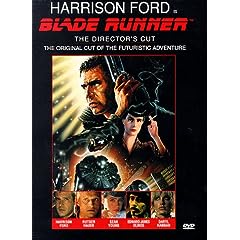 It did, but our opinion of “Blade Runner” remains mediocre.

We agree with film critic Roger Ebert: “Watching the director's cut (of “Blade Runner”), I am left with the same overall opinion of the movie: It looks fabulous, it uses special effects to create a new world of its own, but it is thin in its human story.”

Ebert gets this one right. “Blade Runner” is slick on production. The special effects are so impressive that Scott lets them take over parts of the movie as he pans the camera back to take in breathless shots of his futuristic version of . The movie, at times, is in awe of itself.

We’ll give Scott credit here. He does a magnificent job in crafting his world. It’s a bleak one, but it resonates as realistic: the driving, black rains, the pollution-scarred skies, the blinking, moving billboards, the strange fashions, and the crowds of vampire like citizens.

But this is all background.

The rest of the movie doesn’t live up to the set. The plot is achingly mediocre and stolen from half-a-dozen film noir movies. It relies on characters hand-picked from central castings old stereotypes closet.

The usually dynamic Harrison Ford is wasted here. Ford sleepwalks through the role of a world-weary police officer who quits to crawl inside a whiskey bottle. But predictably his crusty, insensitive boss calls him back for one last job. Then there is Sean Young as the femme fatale – smoking cigarettes and looking both confused and earnest at the same time.

Ford plays Deckard -- a blade runner (a police officer assigned to hunt down and kill “replicants” also known as cyborgs). The replicants are illegal on earth and only used on other planets for jobs too dangerous for real human beings. It’s never explained why the replicants are not allowed on earth (can’t we all just get along?).

The movie carefully avoids another major problem: if they are illegal on earth then why are the replicants designed to look exactly like human beings? They are also designed to look differently from each other – no two are alike. In fact, the only way to tell a replicant from a real human being is to take a complicated oral exam which takes about 45 minutes to an hour to administer.

Wouldn’t it be easier to design the replicants with blue skin, for example? Or make them all look exactly alike? That way they couldn’t escape and hide among the population of real humans. Seems like an easy fix especially since the replicants have become such a dangerous nuisance that it’s necessary to create the job of blade runner to hunt down and kill them. 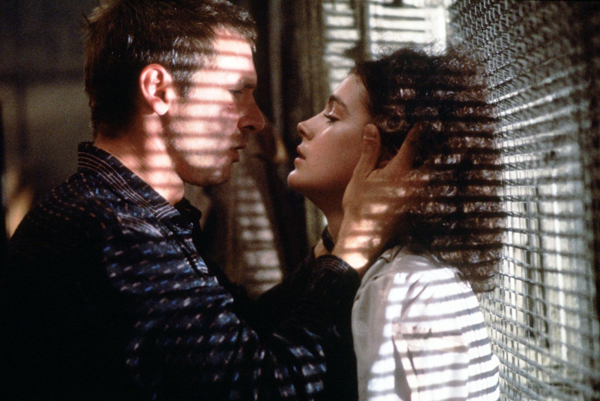 But then, of course, we wouldn’t have a movie.

Deckard is assigned to kill four replicants that murdered a shuttle full of people and now are hiding out in LA. His investigation is riddled with holes and convenient consequences that only happen in movie scripts (he finds a tiny snake scale in the bathroom tub of an old haunt which lead him, of course, to a stripper who uses a snake in her act. She happens to be one of the replicants). He even calls them at their secret hideout and… they answer the phone.

We were also amazed at how Deckard never ever calls for back-up – even when he finally locates the replicants’ hide-out and knows he will be up against two super powerful androids that have already murdered more than 20 people.

“Blade Runner” wants to be a film about the definition of humanity – an action flick with a philosophy. But it fails in both aspects. It spends too little time exploring the idea of manufactured life being real life because the characters don’t really care about the answer. And the action sequences aren’t even as good as the average fare on TV.

GFS3 said...
Actually if you can muddle through the academic buzzwords and the pure enormity of the piece, there are some interesting insights into the film.

I think too many people label "Blade Runner" post-modern because they don't know what else to do with it. The problem with "Blade Runner," however, isn't the ideas or the philosophical questions it explores -- its the execution.

SQT said...
I get why people don't always enjoy "Blade Runner," but I've always liked it. I have no great cinematical analysis, it's just a film I've always enjoyed.
February 19, 2008 7:26 PM

OutOfContext said...
I'll bite--what insights do you find interesting in the Senses of Cinema piece? The thing is so overwrought and overthought it is numbing. Any insights seem hermetically sealed. In other words, my experience of the movie is not enriched.
I will grant that the only type of exegesis I like sticks close to technique and resonance, not overarching theoretical agendas. I'm not saying it's not valid, I'm just saying it's turgid and aggressively intellectualized.
By the way, I like the movie because it looks and feels great, sqt. It's not well written and that's what this post points out well.

Oh, don't get me wrong, I thought the piece read like Windows XL manual. What I found interesting was the references to the film being a post-modern masterpiece (which I do not believe) and the intriguing idea that Deckard was a replicant.

"Blade Runner" is one of those strange movies. I find that I want to like it and can almost convince myself it is pretty good, but then I watch it again and a light bulb goes off.

Last week was the third time I've seen it -- and it will be the last time. The movie looks great -- but it doesn't deliver the goods in character, dialog or action.
February 19, 2008 9:53 PM

Some of the things you mention though seem to forget that you're watching a movie and that there has to be some "suspention of disbelief". I mean, some of the films in your "8 cool sci-fi movies" do not hold up to logic: The Terminator, The Matrix etc

And I prefer Alien to it's first sequel too!!! Maybe that shows how are movie tastes differ! That's why I added it to my list of "Classic Movie Openings"

Keep up the good work

Deckards Mum said...
GFS3. I'm very disappointed in myself for actually replying to this, but I must. I've fallen for the classic formula of Creative success + bitter critic = public response.

I think it's unfair to say that either 2001, Blade Runner or Star Wars are bad films. Many smart and not-so-smart people like them all very much and, furthermore, connect with them. You yourself have watched Blade Runner 3 times by your own admission. Perhaps we differ in practice widely, but I never watch bad film more than once. To be honest I normally walk out before they end. You should save some virtual ink and follow my lead in furture.

PS. I bet you watch Blade Runner again before you check out =) here's to viewing number 4!
December 09, 2009 9:09 AM
Post a Comment
<< Home
Advertisements
DaRK Buttons