Werewolves and vampires get all the celluloid glory. But for a spine-tingling terror, ghost stories generally do a better job of it. There’s something about ghosts that slip under the skin. Perhaps their connection to death – and an inability to fight back against their ethereal presence (after all, silver bullets and wooden stakes take care of werewolves and vampires). Ghosts don’t maim or bite, but they tap into something primeval in us all.

As DaRK PaRTY continues to celebrate the Halloween season – we give you seven supernatural movies about ghosts that are guaranteed certain to raise the hairs on the back of your neck and send a cold shiver down your spine. Director Alejandro Amenabar created a film that feels as if it were made in the 1940s. In fact, the action takes place on an island off the British coast shortly after the end of World War II. Grace (Nicole Kidman) lives with her two children in an enormous mansion awaiting the unlikely return of her husband (who is missing and probably killed during the war). Her young children are sensitive sunlight and cannot leave the house. It becomes clear that there is something else haunting the mansion and Grace fears for the safety of her children. “The Others” is deliberately unhurried which adds to the air of mystery and spookiness, but the pace also gives the director a chance to build character and make the viewers care about Grace. The movie features an ending that will drop your jaw to the floor and it’s because we have come to like the family so much that it has such a visceral effect.

This movie is a throw back to the straight out haunted house story – with many tributes to Alfred Hitchcock thrown in by Director Robert Zemeckis. A housewife, played by Michelle Pfeiffer, begins to suspect that her neighbor murdered his wife and that the wife’s ghost is trying to communicate with her. But it turns out that Claire and her husband (Harrison Ford) are the ones that might have terrible secrets. The movie features a frightening scene in a bathtub that will have you second guessing long hot soaks in your own tub.

The fantastic film responsible for the phrase: “I see dead people.” It’s also the film that propelled Director M. Night Shyamalan to stardom (and who has been unable to duplicate its success). “The Sixth Sense” has one of the best surprise endings ever – a twist so twisted that it will leave you agape. A young boy, played by Haley Joel Osment, is cursed by the ability to see ghosts – and they are all around him: some malevolent, some benevolent, but all of them with issues to resolve. Enter a child psychologist played with understated complexity by Bruce Willis. There’s little more to say here without ruining the ending. “The Sixth Sense” is one of the best ghost stories you’ll ever see and it already ranks as a classic. “The Ring,” a remake of a Japanese horror film, is unsuitably titled, but don’t hold that against it. “The Ring” has a great plot devise – the idea that watching a haunted video tape will kill you in seven days. An investigative journalist played by Naomi Watts watches the tape after her niece dies after watching it. In a race against the clock, analyzes the tape frame by frame, picking up clues, and trying to discover the secret behind the images. “The Ring” has some spine-tingling moments and while the surprise ending falls short of the build-up, this movie ranks as one of the best recent horror films of the last few years.

Amazingly, it’s been 25 years since the release of the masterpiece of ghost movies: “Poltergeist.” Who would have thought that the teaming of Steven Spielberg and Tobe Hooper would produce such a gem? The secret was that both men were allowed to bring what they do best to the table. Spielberg – Mr. Family Film – gives us a nuclear family headed by Craig T. Nelson and Jo Beth Williams with three cute kids. Then Speilberg steps out of the way and lets the director of “The Texas Chainsaw Massacre” terrorize them. The plot has to do with a suburban neighborhood being built on top of a graveyard (the developers moved the headstones – but not the bodies). But the real joy here was Hooper’s knack for terror being combined with Speilberg’s use of special effects. Lots of controversy surrounds the film as two of the young actors died shortly afterwards (one murdered and the other from a disease) and Williams recently told a movie magazine that actual human skeletons were used in the filming.

This is the overrated Stanley Kubrick’s best film and it’s saved from the uneven direction by outstanding performances by Jack Nicholson and Shelley Duvall (why isn’t she in more movies?). The movie is based on the novel by Stephen King, but it fails to capture the full terror of the book. That said the “The Shining” features some absolutely frightening moments (enhanced by a score that will give you goosebumps). Nicholson’s edgy portrayal of a writer losing his grip on reality and becoming possessed by the ghosts of the haunted hotel where he is caretaker was worthy of an Oscar. For example, the scene where he uses an axe to breakdown a door as 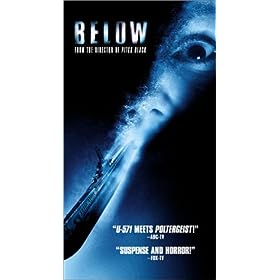 he hunts for his wife is absolutely chilling. Unfortunately, despite several scary scenes, the ending fails to live up to the full potential of King’s novel. Yet it is worthy of our list.

“Below” is a tense, atmospheric haunted house story with the twist being that the house in question in a submarine during World War II. With its narrow metallic corridors, dark confined spaces, and levels and ladders, the submarine in “Below” is a claustrophobic labyrinth lifted right out of Greek mythology. In other words, it’s a perfect setting for a ghost story. Director David Twohy (best known for the underrated scare fest “Pitch Black”) does a remarkable job combining the genres of war and ghost movie. The action moves at a thrilling pace as the crew is ordered to pick up the survivors of a British hospital boat sank in the . Soon they find themselves being hunted by a Nazi battleship while also realizing that the submarine may be haunted by their dead captain – mysteriously killed a few days before the action begins. Like all good ghost stories, “Below” has a suspenseful, surprise ending.

Anonymous said...
Great list, I'll have to check out Below. However, I would replace either The Others or What Lies Beneath with Devil's Backbone(I like both of those movies, I just like the look of Devil's Backbone a little more).
October 16, 2007 7:59 PM

GFS3 said...
That's a great pick. I didn't even think to include foreign language movies in the list.

Anonymous said...
I just saw "Below" and really loved it. Never heard of it before I noticed it on Netflix. I'm glad it's got some fans. :)
December 06, 2007 6:18 PM
Post a Comment
<< Home
Advertisements
DaRK Buttons