Tuesday, September 18, 2007
Under God's Right Arm: The Cult of Darwinism

The greatest threat to Christianity today isn’t homosexuality (although it may be a close second). Nor is it the runaway train of sex, drugs, and loose morals being pumped out as movies and video games from . Heck, it's not even those crazy Mormons.

It is, my friends, Dar

This misguided “theory” has migrated from the intellectual corners of the scientific community to the streets of mainstream resulting in a movement toward atheism – or as I like to call it “God Hating.” Don’t you long for the days when non-believers and heretics kept their ignorance to themselves? Or for when good, God-fearing Christians were allow to burn these demon seeds at the stake?

Unfortunately, those gracious days are behind us. Now we are faced with an onslaught of God Haters like authors Daniel Dennett (“Breaking the Spell”) and Richard Dawkins (“The God Delusion”). Part of me feels bad for these alleged intellectuals (Dennett is a philosopher – whatever that means! – and Dawkins is a biologist) because they will be burning in hell for all of eternity.

Both of them argue that God does not exist and that the human need for religion is some kind of biological impulse gone awry. Clearly both men have not read the Bible – the word of God. Hard to argue that God doesn’t exist when he left us a very heavy tome filled with his wisdom. Note to Dennett and Dawkins – you can find the Bible in any book store in the country (and in just about every hotel room!).

There you can read this nugget from Matthew: “Woe unto you, scribes and Pharisees, hypocrites! for ye are like unto whited sepulchers, which indeed appear beautiful outward, but are within full of dead men's bones, and of all uncleanness.” (Matthew 23:27)

I think that about says it all! For Christians out there who have done a good job of avoiding science in favor of home-schooling and religious studies allow me to give you a crash course in Darwinism. Charles Darwin was a bald scientist with very bushy sideburns (you should see pictures of the guy – what a puss!). He wrote a book called “The Origin of Species” that many science and fact-based people believe explains evolution and how humans, animals, plants, and insects came into being. The book is very boring, but it argues that organisms gradually evolve through a process called natural selection. Natural selection is the theory (which is a fancy way of saying “guess”) that individual organisms struggle to survive and those with the best or most favorable characteristics will be more likely to survive. As a result, those favorable traits will be passed onto their offspring and become the dominant characteristics among organisms. Blah, blah, blah.

It’s this outlandish and wildly irresponsible theory where believes that monkeys evolved into human beings. What’s next? Ants that evolve into talking lions? How about the dinosaurs becoming birds? According to nut jobs like Dawkins and Dennett, could evolve into a non-gay man.

You can almost see God rolling his eyes in heaven over this ridiculous notion. Scientists want us to put their trust in them – but aren’t they the ones who developed the nuclear bomb and can’t even figure out a good diet?

The problem with Darwinism (and the science it is based on) is that it often relies too broadly on facts rather than on common sense. Where I come from, we go by the old saw “Keep It Simple Stupid.” In other words, the simple solution or answer is usually the right one. So let me ask all of you, which scenario is more likely:

Life evolved slowly over hundreds of million years with animals and plants branching off into different species and sub-species as they began to react and modify their traits to adapt to their environment. The stronger traits – the ones that helped them survive best – dominated and the weaker characteristics simply died out. The result was a natural balance where plants, animals, insects all live, thrive and, prey on each other in a complicated and complex eco-system. From this system, humans eventually evolved from 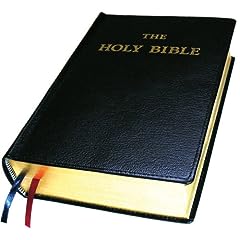 apes over millions of years.

An all-mighty, all-knowing, all-powerful Supreme Being created the universe in six days. He created man in his image from a mold made of dust and breathed life into him. From man’s rib, he created woman and then put them in the Garden of Eden on Earth. All of us originate from this first pair of human beings.

I know, I know, the second scenario has a certain poetry to it, but it also rings true. You can feel its truth! The first scenario is just silly. Do you know how many things had to fall into place for man to be created? Lots of them. You’d have a better chance of winning the lottery!

No wonder Darwinism is a theory – and not even a good one.

I’ve developed a new habit. Every time I hear someone blabbing on about Darwinism – I send them a Bible. Maybe I should do the same for Dennett and Dawkins. Then, maybe, they’ll learn something.

(The Rev. Colson Crosslick is pastor of the in Ripsaw, . In the past, he has called for a boycott of all books except the Bible. He also writes the regularly appearing column Under God's Right Arm for DaRK PaRTY.)

Click the links below to read more of Rev. Crosslick's incredible insights on:

The Disease of Liberalism

Anonymous said...
blah blah blah. you guys are just mad because being the weak minded part of the species, you're scheduled to die off next.

now if you'll 'scuse me i'll go enjoy some warm toasty hellfire while you get naturally selected. simian.

Anonymous said...
Dear J.R. Dobbs:
When Satan is sticking his trident up your bowels, you'll be singing a different tune (at a higher pitch as well!).

It's interesting that you call me weak-minded when I've read the Bible -- one of the greatest pieces of literature on earth several times. Clearly, you aren't smart enough to have read it.

Because if you did the golden light of Jesus would save you.

steven A-rep said...
how are u going to say that non believers are ignorant...when ur calling darwin a "puss"....and ur saying that the first theory is silly....thats not ignorant..yea.....the second one doesnt make to much sense...how is one being going to create this complex ecosystem in six days...... that is veryyyy relistic...o yea...thats abouti cant believ u are sayin we are ignorant.....I have never seen the slightest scientific proof of the religious theories of heaven and hell, of future life for individuals, or of a personal God. Therefore i find it hard to believe in it.... I don’t mean to criticize but if you actually think about it without the mind of religion...then it doesn’t really make sense.... I do not think that one being or spirit can create this whole earth........ and when I ask a christian how this happened they say "god". And I ask how did god do it and they say because he's "god". That does not prove to me that "god" did it. I am against religion because it satisfies us with not understanding our world. In science an Idea is false, unless proven to be true. So does god exist? Prove it.u cant....and if u think "god" is real then how did "he" get here...you completely ignore the advancement of science for the sole purpose that u are afraid of ur so called "hell" and want to live in this paradise "heaven"it doesnt make and sense....this world would be much better without your ignorant mind contadicting facts....but i would like to see this day becasue you are all brainwashed by this and will take a miracle to change your ignorant minds....

Anonymous said...
Dear Stephen:
It is difficult to argue with someone who insists that they aren't ignorant when they write in incomplete sentences filled with misspellings and poor grammar. One could argue - and I will - that you've provide ample evidence of your ignorance by doing that. Please learn to write in English and then come back and try again.
Yours in Jesus,
Colson
October 05, 2008 9:43 PM

steven A-rep said...
I am so sorry that I did not capitalize my I's and put periods at the end of my sentences. I used 3 dots. I'm sorry. Does it really matter though?
I know how to speak and write Englsih. My goal is not to have correct grammar but to put my input in on the situation. You did a really good job at replying to my statements though.
Nice. You did'nt display any ignorance at all did you? You've seen one entry of mine and you're telling me to learn how to write in english. It does'nt even make a difference in this situation. So write something important.
March 01, 2009 8:58 PM
Post a Comment
<< Home
Advertisements
DaRK Buttons