(Having just spent the last 10 days rocking on a hammock, DaRK PaRTY suddenly has a strong love of trees. After all, hammocks work so much better when attached to trees. But it is difficult to adore trees without thinking about one of the most popular poems of all time – “Trees” by Joyce Kilmer. Hmmm, we thought. What about this fellow Kilmer? Who was he? So who better to give us the lowdown than Kilmer’s granddaughter Miriam A. Kilmer. She operates a Web site dedicated to her grandfather. Miriam is an artist who runs Rising Dove Fine Arts and Services. She was more than happy to spend some time talking about her famous grandfather.)

DaRK PaRTY: How would you describe your grandfather for those unfamiliar with him? 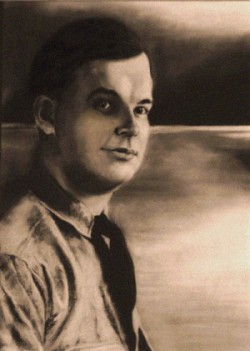 Miriam: Since Joyce Kilmer died before I was born, I rely on the descriptions of my father and Robert Cortes Holliday. According to them, he was partial to good company, a very emotional and spontaneous person, an outdoorsman as well as a literary man and fond of his drink. He was an idealist who threw himself whole-heartedly into the causes he espoused, becoming an atheist when he was a Socialist, and then a devout Catholic upon his conversion after he was disillusioned by Socialism. He was a loving family man, but his dedication to his country and his horror at the sinking of the led him to leave his wife and four children to serve in the army, putting his life in danger.

DP: His poem "Trees" -- one of the most popular in the world -- is often savaged by critics. What do you think of "Trees?"

Miriam: I think "Trees" is a lovely, simple poem, accessible to many, that does not stand up to severe literary criticism. It is not, and was never meant to be, a great poem. The whole point, after all, is that trees outshine poetry. It suffers from being set to music, for which it was never intended. It is not my favorite of Joyce Kilmer's poems, but it is the one that people love, and I have no argument with that. I am glad that it is used to foster reverence for the environment, and specifically for the dedication of tree plantings.

DP: Most of his other poems are often overlooked. Which poem of his is your favorite and why?

Miriam: My favorite keeps changing. Just now I prefer "The Snowman in the Yard," which reflects his devotion to his children. It's very homey and deals with ordinary things, and I find it very moving.

DP: What do you think is the biggest misconception about your grandfather?

Miriam: I guess I would have to say it's the notion that he was a saint. I think that idea is based on the reading of the one poem, "Trees," and not on any study of his life. He had the ordinary foibles of us all, and hated the Germans with a passion. I don't think he had any extraordinary virtue that would make him a saint except in the sense that everyone of good will is a saint.

DP: Your grandfather was a sergeant with the Fighting 69th during the Great War and was killed in combat at the age of 31. What do you think his career would have been like had he survived and continued to write?

Miriam: I think Joyce Kilmer showed promise, and it's possible that he could have become a leading poet if he had continued in the vein of poems such as "Delicatessen" and "The Blue Valentine." However, I think it's more likely that he would have continued to make more important contributions as an editor and poetry critic.

Anonymous said...
You need to attribute the portrait of Joyce Kilmer. It's a pastel by the person you interviewed, Miriam Kilmer.
August 15, 2007 8:45 AM