Everyone knows the horrible cliché: “A picture is worth a thousand words.” Far be it from us to argue with bad platitudes. Pictures – especially photographs – have the uncanny ability to evoke powerful emotions – so powerful that some photographs have changed the world.

Or at least our perceptions of the world.

It’s difficult to determine what makes up the composition of a good photograph never mind a great one. But one element is the ability to capture humanity. All the photographs we have chosen for our list strike a deep, emotional chord. They show us our own humanity reflecting back at us. 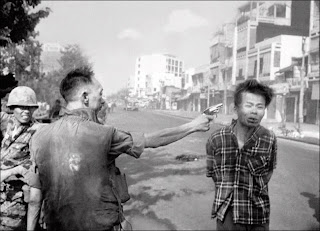 Millions of words were written about the Vietnam War during the turbulence of the late 60s and early 70s, yet none of those words captured as completely as Eddie Adams photograph of a communist spy, Captain Bay Lop, being executed by a Vietnamese officer in . The photograph came to encapsulate all that was wrong with the war and help galvanize the anti-war efforts in the .

The photograph, taken in 1968 during the Tet Offensive, has become one of the most famous – and gut-wrenchingly violent – photographs ever taken. The scene – Bay Lop being shot in the head – is utterly striking. So much so that it is difficult to tear your eyes off of it. 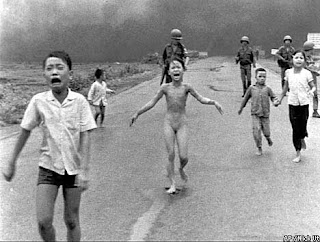 Another photograph taken during the Vietnam War also makes our list. Kim Phuc was a 9-year-old girl living in the . On June 8, 1972, the South Vietnamese napalmed her village as it was being attacked by the Vietcong. Phuc was among a group of fleeing villagers who were mistakenly targeted.

Many of the villagers were killed, including members of Phuc’s family. The photograph of her running naked down the street as napalm scorched her back and fires raged behind her was captured by Associated Press photographer Nick Ut. It won him the Pulitzer Prize and helped turn the American public against the war.

Phuc’s wounds were so severe that doctors didn’t think she’d survive. But after 17 surgeries and more than 14 months in the hospital – she recovered. She’s still alive today.

The photograph, which echoes Edward Munch’s “The Scream,” is absolutely chilling. 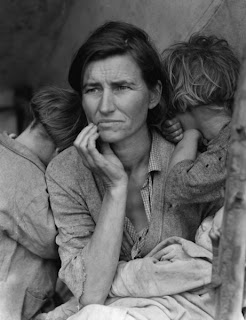 The image of Florence Owens Thompson with hand at her chin and furrowed brow and her children, faces hidden, huddled around her has become an iconic image of the Great Depression. This one image speaks to the hardship of the 1930s almost as much as John Steinbeck’s classic “The Grapes of Wrath.”

The photograph was taken by Dorothea Lange as she drove down U.S. Highway 101. Mrs. Thompson was camped at the side of the road next to broken down truck, waiting for her husband and two sons to return from a garage with equipment to fix the truck.

The photograph – known as Migrant Mother – captured the essence of a woman’s strength when faced with great despair. Mrs. Thompson wasn’t identified as the subject of the photograph until the late 1970s when she wrote a letter to a local newspaper complaining that she never got any money for being the subject of a famous image. 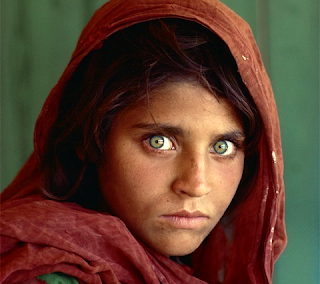 This photograph adorned the cover of “National Geographic” in 1985. It depicts a 12-year-old Afghan refugee with striking green eyes. It was taken at the Nasir Bagh refugee camp by Steve McCurry.

The photograph became a symbol of the war in as well as of plight of refugees around the world. It took more than 15 years to discover the identity of the subject – Sharbat Gula. The quest to find her was actually made into a documentary and her updated photograph became another “National Geographic” cover in 2002.

Gula lost her mother and father in the war and was sent to the refugee camp in . She later returned to her home country where she married and sired three daughters.

Raising the Flag on

Taken on February, 23, 1945 by photographer Joe Rosenthal. The photograph, which became the subject of the Clint Eastwood movie “Flags of Our Fathers,” shows five U.S. Marines and a Navy corpsman raising an American flag over a rocky slope on the .

It has become one of the most recognizable photographs in the world and has come to symbolize American gumption during World War II. Many people think it the photograph depicts a victory, but it was simply a staged event to show progress. The Battle of Iwo Jima was still being fought when the flag was raised.

Man on the Moon 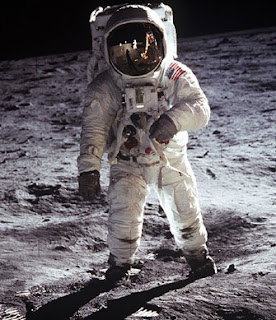 Aldrin, a member of the Apollo 11 team, is also famous for punching in the face a “documentary” film maker named Bart Sibrel, who stalked Aldrin and tried to force him to swear on a Bible that the moon landing weren’t faked.

The photograph of Aldrin made the cover of “Life” magazine and has become an iconic image of space exploration, NASA, and the space race against the in the 60s and 70s. 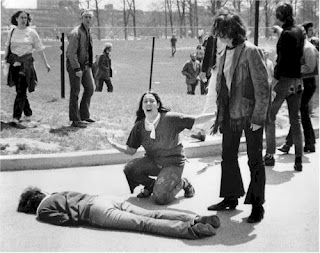 It might be hard to find a photograph as visually emotional as John Filo’s photograph of a 14-year-old runaway girl screaming over the dead body after the 1970 shooting.

The girl was Mary Ann Vecchio who was at the university to protest the Vietnam War when Ohio National Guardsman opened fire on the protesters – mostly students. The body in the photograph is that of Jeffrey Miller, who was shot in the face.

The photograph appeared on the cover of “Newsweek” and won Filo a Pulitzer Prize. The expression on Vecchio’s face is one of raw emotion that is difficult to ignore and become a symbol of the U.S. anti-war movement.

It is a striking photograph of the earth taken during America’s historic Apollo 11 Space Mission in 1969.

It has been used for years as a symbol of environmentalists. It is featured on the earth flag (http://www.earthsocietyfoundation.org/flag.htm). and has most recently been featured in Al Gore's "An Inconvenient Truth."

GFS3 said...
Another excellent and chilling photograph is the Burning Monk photo which you can see here: