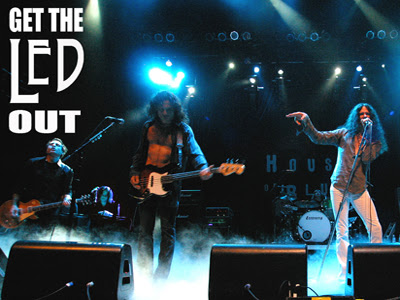 An Interview With Singer Paul Sinclair

(DaRK PaRTY gets down-home, beer-swilling, high-school cool when “A Whole Lotta Love” breaks through the clutter of FM radio. What’s not to love when it comes to Led Zeppelin? Our opinion about the greatest rock band in history can be found here. So it is only natural that we’d finally wander over to Get the Led Out’s Web site to learn more about a tribute band many call “the American Led Zeppelin." Paul Sinclair is the lead vocalist for this group of professional musicians dedicated to recreating the studio recordings of Led Zeppelin on the big concert stage. Paul has been recording and performing in his original hard rock group "Sinclair" for many years as well. Along with guitarist Paul Hammond, he has released two full length albums and a number of EPs. Co-owner of Fat City Studios in Blue , Paul is also an engineer/producer whose credits can be found on numerous CDs throughout the "indie" world. His passion for Led Zeppelin may be second to none.) 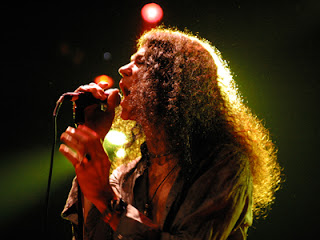 DaRK PaRTY: For DaRK PaRTY readers unfamiliar with Get the Led Out can you give us an origin story? How did you get together in the first place and why Led Zeppelin music?

Paul: My guitarist Paul Hammond and I have been performing in and around the area in our original band "Sinclair" for many years. Our music is often described as a combination of 70's Aerosmith and Led Zeppelin. As a singer, my two biggest influences are Steven Tyler and Robert Plant. So if I'm known for anything it would be my passion and dedication to this style of singing.

In the fall of 2003, I was contacted by bassist Paul Piccari who along with another guitarist was putting together a Zeppelin show that he wanted to take to theaters, festivals and other national venues. He had heard of me and proceeded to track me down. Like most Led Zeppelin tribute shows out there, they wanted to do a version of the movie "The Song Remains the Same." Playing the extended live versions and impersonating the members.

I was never really interested in doing a "cover" project and certainly not an impersonator show. I also had no interest in performing the live versions of Led Zeppelin's songs. The album versions are what hooked me with Zep. Needless to say, we didn't get off to a great start, but in time it would become a dream project!

Long story short, I brought Paul Hammond in, we went through some line-up changes and eventually found all the right guys, we decided on the "studio version" approach, agreed NOT to go the "impersonator route" and hooked up with Frank Kielb of Frank Kielb Entertainment who has helped us to take this thing to the national level. Going onstage as ourselves, putting on a big rock concert performing the studio versions of the Zep catalog has turned out to be what separates us from the other Led Zeppelin shows and I attribute a lot of our success to this. I'd like to tell you that it was a calculated, savvy business move, but in reality it was just the only way I could see doing it. 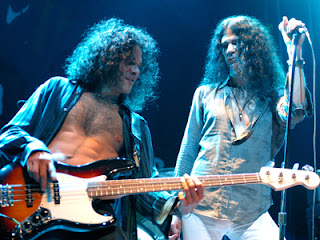 you think Led Zeppelin remains such a popular rock band even today?

There is a depth of musicality with Zeppelin that hasn't been reached since. They are sort of the classical composers of the rock era. I believe 100 years from now Led Zeppelin will be looked at as the Beethoven or Bach of our time (along with The Beatles, The Stones and Hendrix). As cliché as it sounds, their music is timeless. A kid today hearing “Led Zeppelin II” for the first time gets the same feeling I did when I was 15. I KNOW because I talk to these kids at our shows!

DP: Get the Led Out captures the essence of the mystical side of Led Zeppelin -- that mesh of fantasy with rock and roll. How important is that to your performance and what Zeppelin songs go over best with fans in concert?

Paul: Led Zeppelin did all the work. It's the songs themselves that create that mystical vibe. As long as we deliver them with accuracy and passion we should be able to maintain it. It obviously changes with the night and the audience, but generally speaking the big crowd pleasers are "Babe I'm Gonna Leave You," "No Quarter," "Heartbreaker," "Moby Dick," "Kashmir," "Whole Lotta Love" and of course "Stairway To Heaven!"

DP: Have you ever met anyone from Led Zeppelin (band, management, record label, etc.) and, if so, what has their reaction been? 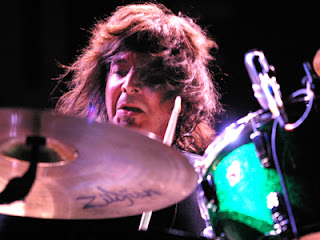 Paul: Last year we were contacted by a representative of the ABC Trust, a charity to help feed the children of . This is a charity that Jimmy Page and his wife Jimena are very involved with. Turns out that the representative, JR Warner was a childhood friend of mine. He explained that he had become friends with the Page family and that they were looking for Zeppelin bands to possibly put on fund raisers. He and Jimmy had watched our latest video online and Jimmy seemed impressed.

JR then attended one of our shows and he and guitarist Paul Hammond really hit it off. JR mentioned that he was going to visit Jimmy around his birthday and wanted to bring him a Martin acoustic guitar as a gift. Next thing you know, JR, Paul Hammond and myself are at the Martin factory helping to design a special birthday gift for Jimmy Page.

Again, long story short, when the guitar was completed JR, Paul Hammond and the guitar flew to to meet with the ABC trust and to deliver a birthday gift. They met with the heads of the charity to discuss ideas for fund raising events. Jimmy was out of the country at the time but Paul and JR spoke with him by phone. Paul was very excited to "talk shop"(guitars, amps, gear in general) with one of his heroes!

Paul and JR were then invited to the Page home where they spent some time with the family. Paul proceeded to play Christmas songs on the guitar for the kids. All in all, a pretty amazing trip! Jimmy was very appreciative for the guitar and when he finally returned and was able to play it, he expressed how he absolutely loved it!

All the members of Get The Led Out have been in the music business for a lot of years. As a result of this, each of us has had some pretty cool experiences meeting and/or working with people in the biz that we admire. As it relates to Zeppelin, Jimmy Marchiano worked with Kevin Shirley (mixing engineer on "How The West Was Won" and the "Led Zeppelin DVD"). Paul Hammond worked with Steve Albini (producer of Page/Plant "Walking Into Clarksdale"). These were both pre-Get The Led Out experiences so there were no reactions to be had. 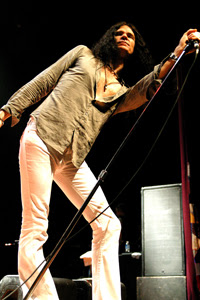 e your three favorite Led Zeppelin songs and why?

Paul: 1. “Babe I'm Gonna Leave You” - It's probably the most moving vocal performance I have ever heard.

2. “Heartbreaker” - Jimmy Page is the king of the rock riff and it just doesn't get better than this one! You can't feel any cooler than being onstage with this song... period!

3. “Whole Lotta Love” - This song IS Led Zeppelin. With all of the musical journeys they have taken us on, one thing remains constant... the groove. It doesn't get groovier. “Whole Lotta Love” is drenched in sex and bombastic in its delivery! It's the very essence of what makes them the mighty Zep!

(Photos by Scott Weiner and courtesy of Get the Led Out)

Read about the 12 Coolest Women in Rock History here