New DaRK
Unusual Literary Deaths
Poem: Waiting for the Other Sword to Drop
Literary Criticism: Ernest Hemingway's "A Clean, W...
5 Questions About: The Great War
Billy, Lose This Music Video
Strange Fruit: The Making of a Protest Song
5 Questions About: Star Wars
Essay: On Mowing the Lawn
An Atheist Watches "The Passion of the Christ"
5 Questions About: Documentary Films 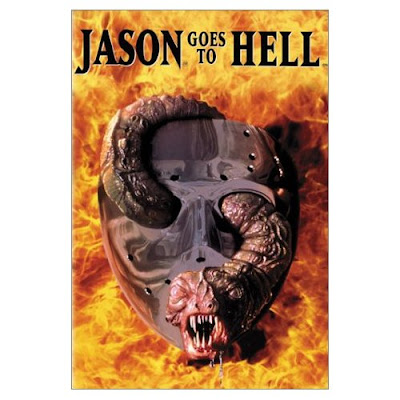 (Don’t we all have a soft spot in our hearts for Jason – the deformed, mentally unstable serial killer from the “Friday the 13th” movies? What’s not to love? The tender ways in which he hacks up his victims with machetes or the skill he uses to cleave open skulls with axes? Clearly some love him more than others. Meet Blake Washer and Brenna O'Brien who have been running the official fan site, Fridaythe13thFilms.com, since 1998. The message board on the site has grown into one of the largest horror movie forums on the Internet. Blake has a degree in screenwriting, and Brenna is about to finish her PhD in education (do we really want this women teaching children?). They are both natives of (the side), and are probably one of the few couples to ever receive a signed Jason hockey mask as a wedding present.)

DaRK PaRTY: What is the main attraction of the Friday the 13th movies?

Blake and Brenna: The Friday the 13th films are pure entertainment. They're not meant to inform or persuade or make us ponder man's inhumanity to man, though there's plenty of that! No, the films do exactly what they set out to do - they're designed to thrill. No one faults a roller coaster for a lack of narrative complexity! You scream, you jump, you laugh, and if you enjoyed it enough you do it again. Over twenty-five years later, a lot of people are still enjoying the ride. DP: Can you describe as best you can the personality and appearis mother get murdered by a camp counselor in the first Friday the 13th, andance of Jason Voorhees (is he a human? Zombie? Something else?)

Blake and Brenna: What makes Jason Voorhees different is that he's a sympathetic character. He was a deformed child who almost drowned and then spent the rest of his childhood growing up alone in the woods. He saw h so now he exacts his revenge on anyone who returns to . Teenage fans can identify with that sense of rejection and isolation, which you can't really get from other killers like Freddy Krueger and Michael Myers.

When he returns as a zombie in Part 6, Jason Lives, he becomes a single-minded killing machine - kind of like the shark in Jaws. Any shred of humanity is gone, and on top of that, he's now unstoppable. At this point the audience isn't really trying to figure out what Jason's motivation is; they are ready to just cheer as the body count keeps going up.

DP: There have been 11 movies in the "Friday the 13th" series. What are the three best and why?

Blake and Brenna: Part 4, The Final Chapter is definitely a high-water mark for the series, despite being the "final" fourth film in a series now up to eleven. The cast (including Corey Feldman and Crispin Glover) is great, the script is clever, the direction is tight, and the atmosphere is spooky. Get a group of friends together and throw it on.

Friday the 13th: Part 2 was the first movie to actually have Jason Voorhees as the killer. Amy Steel was an amazingly strong and charismatic female lead, and the other teenagers were likable and you felt sorry for them when they got killed. A kid in a wheelchair taking a machete to the face? You can't get much better than that.

And the original, Friday the 13th. As much as horror fans like to debate about which movies really started the franchises of the 80s, there is no denying that the original made an impact on our culture. With the special effects of Tom Savini, the familiar setting of a summer camp, and the reveal at the end of a female killer - Friday the 13th had enough originality to keep people coming back for more.

DP: What are the three worst Jason movies and why?

Blake and Brenna: Part 8, Jason Takes Manhattan, was ill-conceived and just ended up looking cheap. We think a lot of people felt conned when Jason only gets to in the last quarter of the movie, and even then only a few scant minutes were actually shot in !

Jason Goes to Hell (Part 9) is not high on most fans' lists because it took the character in a new direction and introduced a lot of mythos into the series that seemed to come out of left field. There're still some memorable moments, but overall a lot of people left the theater shaking their heads after this one. A Jason 'hell baby'? Come on. DP: The most successful film in the series was "Freddy vs. Jason" -- a cross over film that pitted Jason against another slasher movie character Freddy Krueger. What are your thoughts about bringing the two together and should there be a sequel?

Blake and Brenna: We think Freddy vs. Jason was a good movie for its time, but trying to blend the worlds of two franchises proved to be very challenging. We thought there were a few too many silly, dream-like effects geared towards Freddy fans. The most controversial aspect of this film was that Jason's appearance was radically changed. Some fans wanted the look of old-school Jason, as played by Kane Hodder, while others appreciated Ronny Yu's new take on the character.

With this type of movie, it's hard to make everyone happy. If there was a Freddy vs. Jason 2, it would be interesting to see them focus more on the teenagers and make them more believable characters that have to outsmart both Freddy and Jason, instead of just standing on the sidelines and being slaughtered like the previous movie.

Click here to read our article on six great, but obscure horror flicks