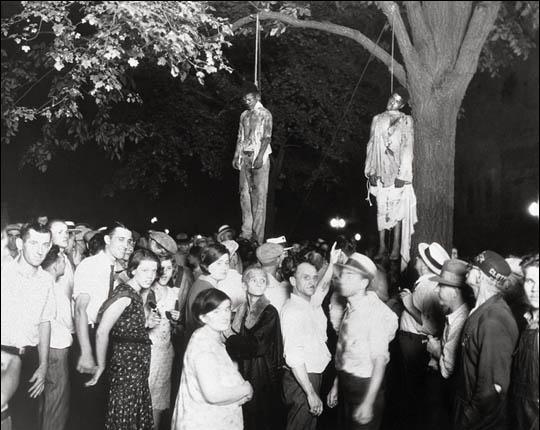 Southern trees bear strange fruit,
Blood on the leaves and blood at the root,
Black bodies swinging in the southern breeze,
Strange fruit hanging from the poplar trees.

Pastoral scene of the gallant south,
The bulging eyes and the twisted mouth,
Scent of magnolias, sweet and fresh,
Then the sudden smell of burning flesh.

Here is fruit for the crows to pluck,
For the rain to gather, for the wind to suck,
For the sun to rot, for the trees to drop,
Here is a strange and bitter crop.

When you listen to Billie Holiday sing “Strange Fruit” it’s difficult not to feel an icy shudder slip down your spine. Her haunting voice backed by the lonely wail of a trumpet cuts right to the bone. There’s no avoiding “Strange Fruit.” The song refuses to be shoved to the background. It pushes, elbows, and kicks its way to the forefront.

“Strange Fruit” refuses to be ignored. The song, written in 1937, vividly captures a lynching. The “strange fruit” of the song are the hanging corpses of black men dangling from the branches of a tree. The lyrics are so bold – so direct, that they’re like a swift kick to the teeth.

Holiday, who died in 1957 and may be the best female jazz singer in history, used to end her sets at the New York jazz club, Café Society, with the song. She’s perch on the stage with a lone spotlight washing over her as she sang “Strange Fruit” with her eyes closed.

The song held such an emotional impact over Holiday that she often broke down backstage ( said the song reminded her of the death of her own father).

“Strange Fruit” had much the same effect on audiences. It often left the mostly rich, white patrons of Café Society squirming in their seats and many complained to the club owners about the lyrics. In fact, ’s record label refused to release the song. had to turn to an alternative record label to get the song to the public. Yet, despite the fight to release it, “Strange Fruit” became one of her biggest hits.

Amazingly, despite her claims to the contrary, didn’t write the song she’s most identified with. “Strange Fruit” was written by Abel Meeropol (under the pen name Lewis Allan), a white Jewish school teacher born in .

Meeropol was inspired to write the song after being horrified by the Lawrence H. Beitler photograph of Thomas Shipp and Abram Smith lynched in Marion, Indiana in 1930 (see the photo above). He wrote the song as a poem and published it in The New York Teacher, a socialist union magazine.

Meeropol, who later penned songs for Frank Sinatra and Peggy Lee, set the song to music and performed it with his wife and a black woman piano player named Laura Duncan. But without , the song probably would have disappeared.

, a troubled, but vastly talented singer, adopted the song – and did what she did with most songs she sang – turned it into her own. said after the first time she sang “Strange Fruit” to an audience in 1939: “I thought it was a mistake. There wasn't even a patter of applause when I finished. Then a lone person began to clap nervously. Then suddenly everyone was clapping and cheering.”

“Strange Fruit” took protest songs out of the shadows and proved that they could be popular hits. And 70 years later, "Strange Fruit" still stirs the soul and proves that music can help change the world.