Let’s all come to grips with Hugh Grant. He’s a one trick pony. He plays the same damn character (with slight variations) in every single movie. He’s the irreverent, slightly eccentric, slightly obnoxious English man who is really a boy at heart. When he’s on his game – like in “About a Boy” (2002) – he’s brilliant. But when he’s not – like in “Nine Months (1995) – the results are insufferable.

“Music & Lyrics” (2007) is the latter. This is bad cinema at its nauseatingly finest. It’s so predictable that at various points in the film you may get the tingling feeling of déjà vu because you’ve seen all of this before. Yet like all other fantastically bad cinema, it’s hard to tear your eyes away from the screen. Even as you watch Grant and Drew Barrymore, the Meg Ryan of her generation, flailing with the poor writing and terrible plot there’s something appealing about watching them both drown.

Be prepared, however, because you’ll be forced to endure a trite, achingly bad romantic comedy overflowing with smug one-dimensional characters that sprout off bad one-liners like, well, like bad movie characters. But that’s the appeal of “Music & Lyrics.” The one-liners are the movie. Grant gets to utter nonsense like: “I like your roof. It's good that its upstairs” and “We could even re-pot the ficus.”

Then there is Drew Barrymore. Poor Drew. She seems to be stuck in romantic comedy hell. In the last few years, she’s fallen in cinematic love with the likes of Jimmy Fallon, Adam Sandler, Ben Stiller, and Eric Bana. None of those couplings, however, are as stained to watch as “Music & Lyrics.” Generally, Barrymore is a natural in romances, but in “Music & Lyrics” her character comes across as emotionally u 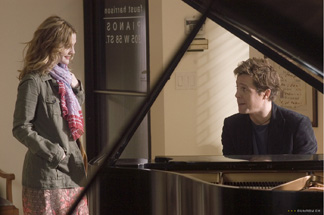 Here’s the premise. Grant plays a washed up eighties pop star named Alex Fletcher (the forgotten half of a duo called Pop!). The best part of the movie is the MTV video of Pop’s hit single “Pop Goes My Heart.” Unfortunately, this hilarious parody takes place during the opening credits. It’s all downhill from there.

After spending the first 10 minutes establishing Grant as an affable, but self-centered has-been, we’re introduced to the fragile, emotionally scarred, yet talented writer Sofie Fisher. At any point in the film, it wouldn’t be surprising if Barrymore took razor blades to her wrists.

They meet when – get this – she comes to Grant’s apartment as his replacement “plant lady.” Her job: to water the plants. Barrymore plunges into the apartment as a nattering nub of neuroses. After lobbing one-liners and ridiculous asides at each other, she pricks her finger on a cactus. Panicking when she learns that he doesn’t have a first aid kit, she flees to the emergency room to get it treated. Oh, the hilarity!

They meet again, of course. She returns while Grant is trying to pen a new hit pop song for a mega-pop diva who happened to love him when she was 7-years-old. The problem: Grant hasn’t written new material in more than 10 years and has only – gulp! – three days to write a song for her new album.

Grant’s new lyrist is dark, bitter, and cynical (better suited, perhaps, for writing material for Rage Against the Machine). So while Barrymore waters the plants, she naturally begins to snap out punchy lyrics and suddenly Grant has got to work wi th her. She’s a natural!

Much hijinx follows – none it very memorable, lots of it painful. There’s a sub-plot about Barrymore and her former love affair with an English professor who used her as a model for his bestselling novel. Other than a wasted performance by the usually fantastic Campbell Scott, the sub-plot borders on the preposterous. I won’t bore you with the restaurant fight between Grant and Scott, where Grant shouts: “My face is in the butter!”

But here’s where we get to the fantastically awful part of the movie. Grant and Barrymore have written the song, fallen in love, and hit the deadline within the first hour of the movie. There’s nothing left to do – but the filmmakers need another 40 minutes. So they devise a bizarre sub-plot about selling out and artistic integrity.

It is truly painful to watch.

The pop diva (played by Haley Bennett) wants to change the song and Barrymore won’t have it. Grant, of course, could careless – just as long as he’s paid. Can the couple – partners for all of 96 hours – endure the artistic impasse? Can audience digest this improbable plot twist? Will there be more one-liners like: “You seem angry - click your pen!”

“Music & Lyrics” ends up celebrating Grant’s final redemption – for not selling out. But the beauty is that he only does it to win back Barrymore. So, in fact, he sells out his sell-out personality to get what he wants.

Simply beautiful and hideous at the same time – kind of like “Music & Lyrics.”