New DaRK
Ode to "Bourne Supremacy"
Under God's Right Arm: The Cult of Darwinism
Poem: The Great Drunken Poet
Steal Your Face: The 12 Greatest Grateful Dead Tunes
Distraught and Struggling with his Sexuality, 17-y...
Fantastically Bad Cinema: "The Jewel of the Nile"
Musical Memory: U2 and Me, Too
Cracked-Back Book Reviews: August
12 Valuable Lessons From Hollywood
5 Questions About: Joyce Kilmer Resume: As a teenager, Jett founded the band the Runaways with Lita Ford. The Runaways opened for big acts like Cheap Trick, Van Halen and Tom Petty. The band broke up after 5 LPs when they couldn’t crack through in the Jett went solo for awhile before forming Joan Jett and the Blackhearts.

Damn Neat Fact: She ran away from home at age 15 after she discovered her boyfriend was sleeping with her mother.

Coolest Moment: Have you seen her performing Gary Glitter’s “Do you Wanna Touch Me?”

Damn Neat Fact: After Heart’s debut album was released rumors circulated that Ann and Nancy were witches and the song “Magic Man” was about Satan seducing a baby.

Damn Neat Fact #2: A second rumor in 1977 had the sisters as lesbian lovers. Ann was so pissed off about the rumor that she wrote the lyrics to “Barracuda” about it.

Coolest Moment: Ann and Nancy dated the Fisher brothers during Heart’s heyday, but eventually fired them

both from the band.

Damn Neat Fact: Her father was a scientist who was involved in cloning the first animal – a sheep named Dolly.

Damn Neat Fact #2: She was bullied as a child for having red hair and green eyes and used to cut herself as a result.

Coolest Moment: The video “Push It.” Coolest Moment: Becoming a punk icon in the 1970s.

Resume: Bass player for the alt-rock band the Pixies and lead singer and guitarist for The Breeders.

Damn Neat Fact: Deal became the bass player for the Pixies after answering a newspaper add. She took on the stage name of Mrs. John Murphy.

Damn Neat Fact #2: She founded the Breeders with her twin sister Kelley.

Coolest Moment: One upping Pixies frontman Black Francis by releasing the Breeder’s album “Last Splash” and showing the world who the real talent on the Pixie’s was and remains. Resume: Lead singer and front person for the band The Pretenders.

Damn Neat Fact: She had a daughter with Ray Davies of the Kinks, but ended up marrying Jim Kerr of the Simple Minds.

Coolest Moment: Allowing Rush Limbaugh to use her song “My City Was Gone” for his intro when he agreed to donate money to PETA. How’s that for irony?

Resume: Singer for The Velvet Underground, but also a model and actress (and friend of Andy Warhol)

Damn Neat Fact: Slept with Jim Morrison of the Doors, Brian Jones of the Rolling Stones, Lou Reed of The Velvet Underground and Iggy Pop (among others).

Coolest Moment: Recorded one of the most influential albums of all time in The Velvet Underground and Nico.

Resume: Lead singer of the band Siouxsie & the Banshees and of The Creatures.

Damn Neat Fact #2: She was once punched in the face for wearing a swastika armband.

Coolest Moment: Becoming a major influence of bands like The Cure, Joan Jett & Blackhearts, Shirley Manson and Garbage and scores of other shoe gazer and Goth bands. Resume: Drummer and back-up singer for the duo The White Stripes

Damn Neat Fact: Claimed to be the sister of her fellow White Stripes musician Jack White even though they were married.

Coolest Moment: She was featured on “The Simpson’s” in an episode called “Jazzy and the Pussycats.”

Resume: Lead singer of the punk band the Plasmatics. 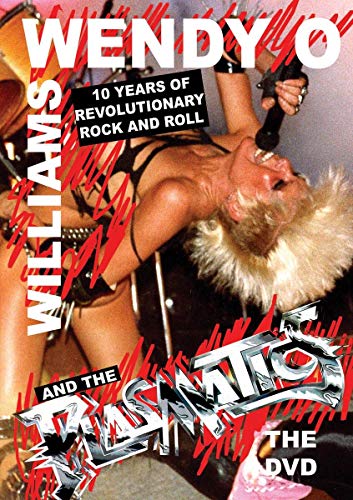 Damn Neat Fact: She was nominated for a Best Female Rock Vocal Grammy in 1985.

Damn Neat Fact #2: She liked to strip on stage and use chain saws to cut her guitars in half.

Coolest Moment: Arrested in in 1981 for simulating a sex act on stage.

Resume: Singer and songwriter with Fleetwood Mac, but also had a long solo career.

Damn Neat Fact: Persistent rumors that she is witch have been denied by Stevie several times.

Damn Neat Fact #2: Courtney Love counts Stevie as one of her influences.

Coolest Moment: Recorded one of the greatest rock albums ever with Fleetwood Mac – “Rumors” – in 1977.

Resume: Married to Kurt Cobain of Nirvana and lead singer of the alt-punk band Hole.

Damn Neat Fact: Hole’s album “Live Through This” was released four days after the suicide of Cobain in 1994.

Damn Neat Fact #2: Once told Rolling Stone magazine that she needed to be saved.

Coolest Moment: Going topless in the 1996 film “The People vs. Larry Flynt.”

See our picks for the 10 Worst Videos from MTV

GFS3 said...
I'm not sure I'd classify Kate as a rock musician. Alt-folk-pop, perhaps?

Anonymous said...
are you crazy, wanting to remove Nico?! I think, au contraire, that the article should have mentioned her solo work: she didn't only appear with the VU; what she did after is just phenomenal; The Marble Index (69) is a revolution, created like 20 years too early, the goth before its name and age...
And the other guy who is insane (yes, another one here xD) is the "writer" (of this): not includong PJ Harvey; its out of my comprehension of this universe. Go check this http://www.youtube.com/watch?v=48GIaN7SrGU and tell me she's not a rock goddess...........
July 10, 2008 6:24 PM

Anonymous said...
Don't forget Tina Turner & Janis Joplin. Even though I'm not a fan of their politics Melissa Etheridge and Cheryl Crow are not too shabby. Annie Lennox & Sarah McLachlan have unbelievable voices, if talent factors in this evaluation.
November 12, 2008 1:43 PM

d. scarlatti said...
Don't know what you were thinking leaving off Patti Smith, Janis Joplin, and Grace Slick. I would have also liked if you'd given a single shout out to some kids who are rocking their prime currently, Carrie Brownstein, for instance.
December 08, 2011 12:41 AM
Post a Comment
<< Home
Advertisements
DaRK Buttons