Tuesday, September 11, 2007
Distraught and Struggling with his Sexuality, 17-year-old Cory Dennison Obsesses Over Will Ferrell

I know, I know, big fucking joke, right? Will Ferrell some pudgy, white dude with no calf muscles. I mean have you seen his legs? His thighs are the same width as his calves – no lie. Weird shit. Weird shit, man! I mean what kind of cruel genes are those? Look up chicken leg in the dictionary and there’s Will Ferrell’s god awful legs stubbing up the page.

But it’s no joke. The dude knows he’s sexy. Knows it! It makes no sense at all – but there it is, people, in black-and-white. Will Ferrell is the bomb. A freakin’ tall cool glass of Red Bull spiked with vodka and ready to be pounded down like a hammer on a two-by-four. Yeah, I know I’m mixing metaphors and shit – but who cares? So finally, I got over it, you know. I mean how many times can you freakin’ go to YouTube and watch a 30 second iPod commercial? I stopped counting at 456 – but I must have gone back maybe a dozen or so more times. But finally, I’m like needing to study for my Algebra II test and start getting serious about pig dissection in my Anatomy & Physiology class (God, do I hate Mr. Goldberg!). So, like, I’m over it. Right?

‘Cause like then, my sweet old mother rents “Talladega Nights: The Ballad of Ricky Bobby” (Thanks, ! No wonder dad took off with that Brazilian counter girl at Dunkin’ Donuts.). But I digress. It’s a car racing movie. Like I’d rather watch back-to-back episodes of the “O.C.” or text message Marsha Weber about how ugly Kellie Gibson’s new hairdo is than watch a movie about car racing – but it stars Will.

I won’t lie to you. I hesitated ‘cause it’s not like I want to go back to being freaky about the guy. I’m not that way either – seriously – and I know most people won’t believe it, but it’s true. I once sucked on Marsha’s titties for like five minutes – and I liked it. Hell, Marsha liked it just fine, even though, you know, my braces kinda nicked her up some.

But then I’m thinking, hey, the legs. How can I get hooked on a round mound of pale, jiggly flesh that has got sticks like coffee table legs? So I’m kinda laughin’ at the whole thing, thinkin’ just watch the fucking movie. Will’s funny with a capital M – as in milk pouring down your nostrils.

So I watch it – alone, in my bedroom, lights doused, wearing my Halloween pumpkin boxer shorts (don’t ask!).

And he’s nude. I’m like what? Well, you know, not totally nude, but running about in tightie whities screaming and yelling – pretending he’s on fire and shit. Guy’s hairy – curly Q’s dancing around his chest, belly, and shoulders. Bogus! Really, it’s bogus. But on the other hand, it’s not ‘cause it’s Will. Will Ferrell. And as we’ve established – he’s damn sexy.

And he knows it. The dude makes it work. So I’m slow mo-ing the streaking parts and I can’t take my eyes off that belly – that glorious, gelatinous mass of soft white flesh – like a goddamn wet bag of marshmallows sprouting pubic hair.

Tents were made in my bedroom. Circus tents.

So I’m freakin’ out now. Totally out of my mind. My grades start to plummet and man they didn’t have far to fall before the guidance counselors are feeding me oxygen and telling me I need 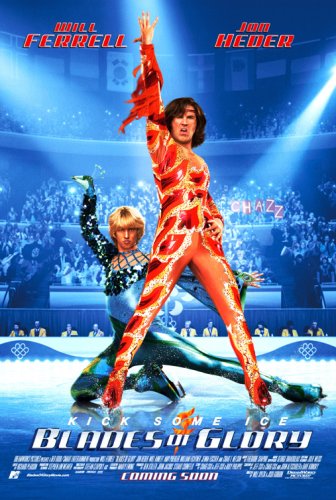 to start thinking about “trades” not “colleges.”

I’m desperate – out of my mind. And then – Will – my slumberland pal, the haunted nemesis of my dreams – comes out with “Blades of Glory” – where he plays an oversexed figure skater!

More nudity, man! He prancing around a kitchen without a shirt and if you’re normal – if you’re like not a total sociopathic maniac – you’re ready to vomit up a lung or at least a kidney. ‘Cause the dude looks like shit! Like Will’s gotta be eatin’ pizzas and subs and Hot Pockets like it’s going out of style – ‘cause ya gotta work on a belly like that.

But I love it, ya know? I’m thinkin’ I’d like to eat a few dozen pepperoni Hot Pockets right off of that heaven sent belly cushion and that belly button that looks like a rivet hole (I just know my pinkie would slip right into that bad boy!).

But I’m startin’ to come to terms with it, ya know? ‘Cause it’s just Will. That’s all. Will’s in my brain and for now I’m just gonna have to live with it.

I got my senior year left and I’ve got time to get my grades in order and get my ass to . I’ll live. I’ll survive. I’ll try not to see “Semi-Pro” in 2008. I’ll try to avoid the “Funny or Die” web site. And I’ll try to spend more time with Marsha and her mosquito bites and mono-brow.

And I freakin’ need to stop this Ben Stiller thing now. Nip it in the bud, so to speak.

Read one of our DaRK PaRTY Parodies at McSweeney's Here