Wednesday, August 29, 2007
Cracked-Back Book Reviews: August
(Welcome to the second take of Cracked-Back, our new DaRK PaRTY feature about the books we’ve consumed. A “cracked-back” is what happens to the spine of a new book once you’ve thoroughly battered it about, and, of course, read it. Please feel free to add your own list of recommendations by leaving behind a comment.) 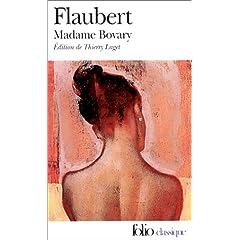 “Madam Bovary” remains a must-read classic and may be one of the most beautifully written novels ever penned. Flaubert’s impeccable eye for details can be breathtaking. He manages to capture setting by evoking the small, telling details of a room. He expertly punctuates character through dress, movement, and dialogue. What is so impressive about “Madam Bovary” is that the subject matter – a woman’s futile attempt to attain happiness through materialism and adultery – still resonates today in our celebrity obsessed culture. The ugliness of the characters – their flaws, prejudices, pettiness, and self-centeredness – can be found today in any suburb of the . The irony is thick in Flaubert and may be too much for modern readers, but this is a novel to savior, to read slowly so you can enjoy the language.

The Road
By Cormac McCarthy
Fiction

Let me be upfront about my general dismissal of most of Cormac McCarthy’s work. I’ve never found the pretentious, awkward language he uses in “All the Pretty Horses” and “The Crossing” all that compelling. I found myself distracted by his style, tone, and refusal to use proper punctuation. I may have to revisit McCarthy after reading “The Road.” This is a savage, heart-wrenchingly beautiful novel about the love of a man and his son set in the post-apocalyptic devastation of the . The world has been destroyed – there are no animals, few plants, the landscape is filled with ash, and the sky is a gray hole. The world is populated by ferocious survivors – many who have banded together into gangs and live by cannibalism. Into this utter decay and chaos, we follow a nameless man and his young son as they journey down a road in search for the ocean and a better life. Be prepared for one of the best father and son novels written in the last two decades. This is a can’t miss novel. 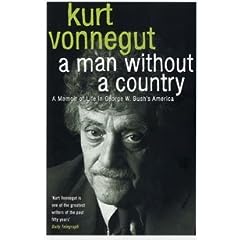 A Man Without A Country
By Kurt Vonnegut
Non-fiction

This series of essays by the master of wit is fun and insightful most of the time. This isn’t Vonnegut at his best, but he wrote the book at age 82 and most of the essays feel like they come from a very bitter and angry old man. The good news is that it is Vonnegut so you can mine lots of nuggets from it. He takes a lot of joy in pounding the President Bush and his staff of buffoons, but it doesn’t take much effort to take potshots at a president with a less than 30 percent approval rating. The book is scary short and can be read from cover to cover on a short airplane ride. One wonders what could have been if Vonnegut spent more time and effort to really flesh out these essays. Instead, they have the feel of a rant rather than a thought out criticism.

I’ve been slowly reading the original James Bond novels by Ian Fleming and enjoying them thoroughly. This is the third novel in the series and so far the weakest of the lot. Although, “Moonraker” did hit new highs for drama and tension during the first 100 pages when Bond is asked to catch a card cheat named Hugo Drax at M’s upper-crust social club. How Bond catches Drax and then cons him into betting more than he can handle is the best part of the book. The second half slides into a standard action book fare. The plot – about Drax trying to blow up with an Atom bomb – has less to offer than the card playing sequences – which is amazing in and of itself. This one is for Bond die-hards only.