(Writer Michael Marshall Smith (who also writes under Michael Marshall) is a thriller writer in the UK who knows how to do several things really well: frighten people, make them glance nervously over their shoulders, and write with a tense, driving confidence that makes you hang on to his books as if you were clinging to a cliff side. We recently caught up with him to talk about writing thrillers, his career as a man of dark letters and his intersecting relationship with Stephen King.)

DaRK PaRTY: What attracts you as a writer to the horror and thriller genre?

Michael: To be honest, I don't understand why anyone would write anything else. These are the genres where you can try to write tense, involving fiction, treading the fine line between reality and otherworldliness, and exploring the darkest and most vital aspects of human nature to your heart's content - while at the same time dealing with everyday existence just as fully and deeply as any other genre.

So why not? I've tried writing other types of fiction, but within a few pages my fingers always end up steering toward the shadows. I've given up fighting that impulse, to be honest.

DP: “The Straw Men” (2002) was remarkable for its tense paranoia -- especially since it was released right after 9/11 -- and ability to keep readers tearing through the pages. What's the origin of the storyline and your thoughts on the book?

Michael: Like a lot of books, I suspect, the original idea came not to occupy a huge part of the final narrative. The question I initially found myself considering was why, given the disadvantages at the time, humankind stopped its hunter-gatherer existence and began farming.

Kind of an abstract point, I'll admit, but no-one's really nailed the question, and so I came up with a (rather unlikely) explanation - which I then realized could be used to rationalize very unpleasant ways of living. And from this came the idea of “The Straw Men.” As the series progressed, the conspiracy became more complex and its roots began to draw from further back in history. And these parts came to me with surprising ease, as if I was remembering something I already knew. I've almost forgotten that some of it (probably) isn't true, in
fact. 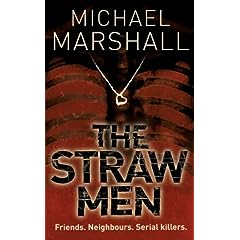 DP: You are adapting Stephen King's short story "Mrs. Todd's Shortcut" about a woman obsessed with finding shorter routes through the back roads of and finding herself in "another place" as a result. What is it about the story that fascinates you?

Michael: I remember reading it years and years ago, and it striking a very vivid chord - even when placed amongst all the other great short stories in that collection. I know when I was writing the first draft of the adaptation, just before Christmas, that the thing that really spoke to me (as it often does with King's work, especially that written in the last five to 10 years) is the melancholy, the quiet and very real horror of chances missed and the irrevocability of time's passing.

Of course that traditional King element of other realms existing just to the side of ours has great appeal too (and is something I often touched on in my Michael Marshall Smith novels), but it's his grip on the human that's always really appealed to me about his work. For such a short story, it packs an amazing punch.

DP: King has written blurbs for your books -- and called "The Straw Men" brilliantly written and scary as hell. Have you met King? What's your relationship with him?

Michael: I don't really have one. I did meet him once - very briefly - at the launch of his novel “Bag of Bones.” It was the first time he'd been in the for quite some time, and his publishers threw a big party for the book, which I was lucky enough to be invited to.

A mutual friend brought King over and introduced us. Sadly I was rendered utterly inarticulate, muttered something inaudible, and King moved on.

To receive his blurb for “The Straw Men” a number of years later was
definitely one of the highlights of my career. King was probably the thing that inspired me most to start writing, and to receive any kind of validation from him -- Well, you can probably imagine. 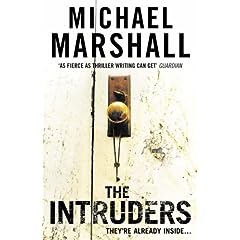 DP: You've just published "The Intruders" in 2007 (with the paperback due this year). Can you tell us about your latest thriller?

Michael: Well, it's a step to the side from the last three novels – “The Straw Men” books -- in that I've allowed myself to re-introduce a few slightly otherworldly elements. I don't think they're incredible, but they're not based completely in consensual reality, so I guess perhaps it represents a move back toward the horror field that I started out in.

I've never believed that you should feel you have to stick rigidly to genre boundaries. “The Intruders” is a thriller with a touch of psychological horror about it - which is a direction I suspect I'll find myself following for a little while now...


If you liked this interview then try:

Read about our own warped relationship with Stephen King here

Read our picks for the 5 Scariest Stephen King novels here