(Everyone has one of those movies in their background. A film that continues to resonate with you even years after you saw it. It might not be your favorite film, but its one that had a profound effect on the way you look at cinema and at life. DaRK PaRTY was curious about these kinds of movies so we posed a simple, yet complicated question:

What film has had a lasting impact on you and why?

We sent this question out to some of our favorite people and we received some very compelling answers. Please feel free to leave your own answer to the question in our comments section).

John J. Michaelczyk, documentary film maker and co-director of the Film Studies Program at : “The Conformist" (1970) by Bernardo Bertolucci, based on Albert Moravia's book by the same name has made a significant impact upon me over the years. The content speaks to me vividly about the idea of "belonging" in an area that has a very negative atmosphere to it. 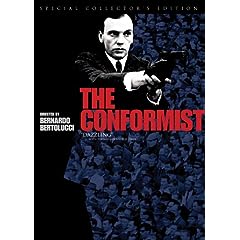 Marcello Clerici (Jean Louis Tringtignant) appears to do anything to survive in a political storm, and basically sells his soul in a Faustian sense in order to become part of the establishment. The nuances of the film and the allusions to international culture, as well as the non-linear editing, make it a very clever puzzle, very much worth deciphering.

Aesthetically, it is an impressively designed film with its art deco feel and fascist overtones that are visually very stimulating. Vittorio Storaro's cinematography brings alive this aspect of the film. Having met Alberto Moravia who wrote the novel and having interviewed Bertolucci for my book on "Italian Political Film," I appreciated all the more the evolution from novel to film and the poetic imagination in both expressions.

Dave Zeltserman, blogger and author (“Bad Thoughts”): If I had to pick only one, I’d say “The Roaring Twenties” (1939). I saw it for the first time when I was about 13, and it is just such a well-made and powerful movie, with such a tragic and noir-ish ending, although also heroic. In my art I strive for the type of perfection that that movie achieved. I’ll never make it, but I have that goal.

R.A. Salvatore, best-selling fantasy author, co-founder 38 Studios: “The Deerhunter” (1978) and “Apocalypse Now” (1979) both hit me hard. I'm the youngest in my family and was just a kid when was raging. Our family suffered loss in that war - from PTSD (Post Traumatic Stress Syndrome). I think now, with the world gone crazy again, I look back to those statements of the nature of men and the horror of war. Laurie Foos, author (“Before Elvis There Was Nothing”): I was going to name a foreign film here but thought it important to pay tribute to our American cinema, so I could name any number of Woody Allen films that have stayed with me, but the one that I return to most often, I think, is "Manhattan" (1979). It's a beautiful tribute to a city and to unrequited love -- and Woody Allen does juxtaposition like no one else. I'm thinking in particular of Woody Allen's character calling someone's self-esteem "a notch below Kafka's," and then in the next scene, he's rescuing Diane Keaton's character from an imagined insect in her apartment. The film also renders insecurities and hopes and humor seamlessly. And, of course, it makes me laugh every time. I don't know how you don't fall in love with again every time you watch that film.

Gretchen Rubin, author and blogger (“The Happiness Project”): “The Piano” (1993). I love this movie but find it so intense that I’ve never been able to see it for the second time. I think that at times, we operate on a symbolic level that’s beyond the kind of symbolism that can be put into words (e.g., Billy Budd is a Christ figure, or Dumbledore is a Merlin, wise-old-man figure). It’s very rare to find that. In books, I would point to Flannery O’Connor’s “Wise Blood” or J. M. Barrie’s “Peter Pan.” I’m constantly searching for examples of this kind of work, but it’s very rare.

Billy Conway, musician and former drummer for Morphine and Treat Her Right: “Citizen Kane” (1941). I got stumped on film because the question made me realize that film does not move me in the same way as some other art forms. I take snippets and life imitates art regularly, but as a whole I will have to think some more about the effect that film has on me and how it is and isn't influential.

Jessica Fox-Wilson, poet and blogger (“9 to 5 Poet”): Just as I was beginning high school, I saw the movie "Heathers" for the first time. Without seeing this movie, I don't think I would have survived the first two years of high school. Any time a "friend" was mean to me, I imagined the friend choking on Draino and saying, "Corn-nuts!" Life was easier because of that image alone.

Steve Almond, author of “(Not that You Asked) Rants, Exploits, and Obsessions”: Gotta narrow it down to one? I'll say "Midnight Cowboy" (1969). Real art in a moving picture, real suffering and doomed loyalty. Imagine.

Jess Myers, poet: As far as movies, I think I have to name “To Kill a Mockingbird” (1962). It is one of few films that truly captures the tone and charm of the book. It's just masterfully done, and Gregory Peck's performance is exactly how I imagined Atticus Finch when I read the book. He just blows me away every time.

Elizabeth Miller, scholar and Dracula expert: Perhaps the film that has made the greatest impact on me is “Cry Freedom” (1987) starring Kevin Kline and Denzel Washington. I have watched it numerous times, and am always moved by it. I had read the book on which it was partially based (“Biko”) but in this case, the movie was even better. Tony Carrillo, cartoonist (F-Minus): The two movies that influenced me the most are “The Jerk” (1979) by Steve Martin, and “Monty Python and the Holy Grail” (1975). I watched these movies over and over growing up, and even though I can probably quote both line for line, I still see something new every time. I still laugh every time I think of Martin screaming "He hates these cans!" These movies prove that something can be completely stupid and absolutely brilliant at the same time.

Nigel Patterson, president of the Elvis Information Network (EIN): “High Noon” (1952) with Gary Cooper. As a young child growing up in in the 1950s, I vividly remember watching this film three times in three weeks. They were the days of TV in its infancy and when the normal Saturday afternoon sporting programs couldn’t be shown the station repeated High Noon. What affected me about the narrative was the amazing inner strength and resolution of Cooper’s character; his awareness of knowing what was wrong from right and the need to personally stand up and do right. It is a message which is arguably even more important in today’s complex, corporate run world. Inspirational stuff!

SQT said...
Life altering movies huh? I don't know about life altering but there are certainly movies that stick with us.

Obviously I'm a big sci-fi/fantasy fan and "Star Wars" had a lot to do with that.

OTOH, movies like "Pulp Fiction" stick with me more in my adult life. Not because it's profound but because it was jarring. "Se7en" was jarring too. And they made you think.