7 Movies that Will Help You Survive


Sometimes you want to poison the heart-shaped chocolates. Pour the red wine into the toilet. Smash the roses against the wall. Tear the Valentine’s Day card into tiny, tattered pieces and light each individual piece on fire.

Valentine’s Day can often be a bitter pill. You just broke up with Mr. Wrong. You’re in the middle of divorcing a woman who makes the Medusa look like a catch. You’re alone again. Damn it.

But, hey, sometimes love isn’t what it’s cracked up to be. So Valentine’s Day becomes a day of anguish, bitter hatred and a day to contemplate why you’re always in a wreck of a relationship.

So put the tissues away and hide the whiskey bottle in the kitchen cabinet. Instead head to the video store and rent one of our classic “unromantic” movies.

Forget the lovey-dovey flicks starring Kate Hudson, John Cusack, Meg Ryan, and Tom Hanks. What do they know? We don’t need another “Sleepless in Seattle” or “Say Anything.” Those movies want to make us reach for a barf bucket – even when we’re in good relationships.

We’re looking for something with an edge. Reality. Yeah, that’s it. Love stinks and these movies prove it. 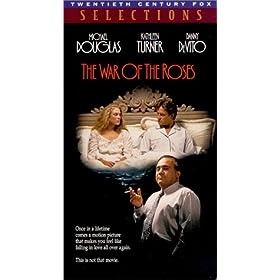 Tagline: Once in a lifetime comes a motion picture that makes you feel like falling in love all over again. This is not that movie.

“War of the Roses” takes love, digs a deep hole, and buries it about 10 feet under. This is vicious tale of love gone wrong. Meet Barbara and Oliver Rose (played with savage darkness by Kathleen Turner and Michael Douglas). They have been married for almost two decades when Barbara realizes that she’s been nothing but a housewife in that time and that her arrogant husband takes her for granted. She decides she wants to open a catering service and divorce him. One catch: she wants their trophy house.

They begin with petty retaliation against each other and soon the violence and cruelty ratchets up to unheard of levels. It dances along the borders of good taste as they actually try to harm each other physically. If you’re in the mood for the “unromantic” then you can’t go wrong with “War of the Roses.”

Best Quote: “You really expect me to keep on reassuring you sexually even now when we disgust each other?” 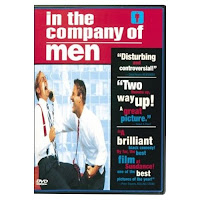 Does any actor do scumbag better than Aaron Eckhart? He’s at his reptilian worst in this independent film by Neil LaBute. Eckhart plays , a misogynist corporate executive sent to a regional office for six weeks. He hatches a plan with his weak-willed colleague Howard (played by Matt Malloy) where they will both woo a girl with flowers, dinners and movies and then dump her unceremoniously.

“In the Company of Men” is a brutal film about our sick corporate culture of power, bullying, and humiliation. In the end, it is clear that the victim of and Howard (a mild deaf woman played by Stacy Edwards) will survive – while and Howard will have to live with what they are for a long time.

Best Quote: “Never trust anything that can bleed for a week and not die.” The movie marriage disintegrates from there. Spacey’s Lester Burnham becomes obsessed with his daughter’s girlfriend (a high school cheerleader) and his wife has an affair with slick real estate mogul that she admires. If you’re looking to justify your hatred for your spouse then “American Beauty” will help you do just that.

Best Quote: “Honey, I'm so proud of you. I watched you very closely, and you didn't screw up once!” Tagline: On the other side of drinks, dinner and a one night stand, lies a terrifying love story.

The 700-pound gorilla of unromantic movies. Michael Douglas plays a happily married lawyer with a young daughter. He meets an attractive businesswoman (played with savage intensity by Glenn Close) and they have a one-night stand. By the standards of one-night stands – it’s a doozy. They have sex in her elevator, in her kitchen, and finally in her bedroom.

is ready to move on, but not Close. She begins to stalk him and isn’t ready to let go. She’s thinks there’s more to them than simply one night of sex. Then is all goes haywire and Close ends up boiling ’ daughter’s rabbit and he, naturally, has to drown her in his bathtub. If you really believe love makes you crazy then “Fatal Attraction” is a natural winner. Tagline: Where do you go when you've gone too far?

“Unfaithful” is a version of “Fatal Attraction,” except this time the woman cheats and the husband is the nut job. plays Connie who is married to Edward (Richard Gere). She’s bored and bumps into an attractive younger man with a French accent and they have an afternoon of wild, uninhibited sex. They begin to see each other more often.

Edward realizes something is amiss and hires a private eye to shadow his wife. He ends up going to visit his wife’s lover and, well, it doesn’t work out so well for the pretty boy. The rest of the movie is about how pampered, spoiled surbanites come to terms with the end of their marriage. It’s one depressing, anti-romantic flick.

Best Quote: “What's accountable? Is that like people eating people?” They begin to play all kinds of S/M control games and it’s all rather ridiculous. The end actually has a romantic kind of ending, but only in the sense that severely broken people can find love in the end – if they find a severely broken person they are capable with.

Best Quote: “Who's to say that love needs to be soft and gentle?” 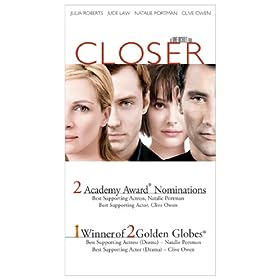 Tagline: If you believe in love at first sight, you never stop looking.

“Closer” is about betrayal. It’s the story of four deeply flawed – and not very kind – people who find each other and starting cheating, lying, lusting, and hating each other. Avoid this film if you have any tendencies toward depression. It features an all-star cast of Jude Law, Natalie Portman, Clive Owen, and Julia Roberts – so the acting is top-notch.

However, “Closer” is a dirty movie and I don’t mean the sex scenes. It exposes the underbelly of relationships and seduction and in the end you’ll probably despise all of the characters. It’s an ugly movie with a message that love might not be worth it, if love even exists for these tortured souls. In other words, it is the perfect “unromantic” film.

Best Quote: No one will ever love you as much as I do. Why isn't love enough?

said...
Methinks you should add Ed Wood's "Fugitive Girls" to the list.

Your blog is most cool.