(A quick glance at the books we’ve been reading over the last several weeks. A “cracked-back” is what happens to the spine of a new book once you’ve thoroughly read it. Please feel free to add your own list of recommendations by leaving behind a comment.)

The Good Father: On Men, Masculinity, and Life in the Family
By Mark O’Connell

Usually we’re not fond of self-help books or the latest pop psychology tomes, but O’Connell’s book was surprisingly free of those sugary-feel-good-moments that generally come with this type of fare. O’Connell, a psychologist, explores the myths of fatherhood and argues for a middle ground between the two arch-types of fatherhood: the strict disciplinarian and the detached go-ask-your-mother softie. O’Connell argues that fathers are important for establishing a child’s moral center and that authority in the form of a father is crucial to development. “The Good Father” uses lots of case studies and the first half of the book is a strong call to action for fathers. However, the second part of the book feels repetitive and the section of the father’s role in the sexual development of his children feels misplaced and out of context to the rest of the book. 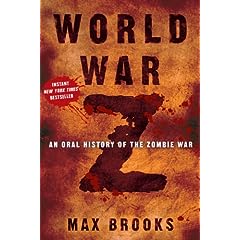 World War Z: An Oral History of the Zombie War
By Max Brooks

The only weakness is this remarkable novel is that it may read too much like a history. The story takes place 10 years after a plague renders the dead into flesh-eating zombies and takes us around the globe for first-hand accounts of the action. It’s this premise that makes Brooks’ novel seem so realistic, but it’s also the weakness as there are no central characters to watch, see develop, and continually root for. But there’s lots to like in the compelling and often horrifying vignettes crafted by Brooks (who may have found a niche as the zombie fiction king of the ). “World War Z” is pulp fiction at its literary finest. Brooks has created a detailed and realistic world that could be real. It’s the kind of book that if in the wrong hands could convince rather gullible person that a zombie war actually did happen. You’ll find yourself streaking light speed across the pages of this one. It’s a fast, furious, and frightening read and comes with our full recommendation. 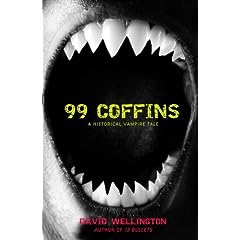 “99 Coffins” falls on the other end of the pulp spectrum from “World War Z.” It has none of the sophistication or literary aspirations of the latter novel. “99 Coffins” simply wants to scare people – and it finds mixed success in that endeavor. Give major credit for being a novelist with a creative imagination. He starts with a fascinating premise – a cache of inactive vampires found beneath a Civil War battlefield. Did one side try to use the undead as a secret weapon to shift the balance of power? Then the kicker: one of the coffins is empty and one vampire missing. Does this rogue blood-sucker have the ability to revive the others? The story, unfortunately, gets bogged down in the flashbacks to the Civil War – which feel forced instead of adding to the narrative. can’t quite pull off the voice of 19th century soldiers. “99 Coffins” has plenty of action and features a gory, gun-blazing battle between cops and vampires. So action fans will have plenty to cheer for. We wish had spent less time with the bullets and more time working on the horror aspects of his novel.

DEMO: The Collected Edition
By Brian Wood and Becky Cloonan

“DEMO” is a graphic novel set up like a series of 12 short stories (it’s taken from the independent comic of the same name). The strength of this collection is Becky Cloonan’s amazing artwork that captures magnificently the alienation of young adulthood through shifting angels and perspectives and the heavy black-and-white line work. The stories by Brian Wood aren’t as powerful as the drawings. Some of the tales, which focus on young people forced into making crucial decisions in their lives, feel cliché. Yet Wood does manage to tap into the darkness and the struggle of many young people who feel alienated by their peers. Many of the stories feature characters with disturbing superpowers – such as being able to kill people with a word or living forever. So give Wood credit for creativity, but only a B for pulling it through all of the stories. “DEMO” has high expectations for itself and it pushes the graphic novel into places that it hasn’t often gone. So if you’re a fan of the genre – this is a must read. It’s also a good place for people who want to read graphic novels to start.

Read about our favorite gunslingers from the Old West