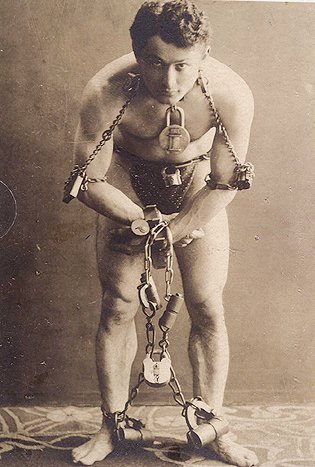 by Joseph Kosiewska
First you must wait until the trunk you are stuffed in hits bottom. Any random movement, the unguarded twist of a neck, the flexing of an elbow or knee, even an anxious rolling of the eyes, can turn your prison upside down and leave you helpless on your knees, your forehead pressed flat against the floor, your handcuffed wrists irretrievably locked behind your thighs.

The wait in any event is a short one, a gently swaying fall through darkness, as brief an eternity of uncertain fear as any you are likely to encounter in your gently swaying fall through existence, and before you know it your trunk has settled in the sand and sea-muck, has half-filled with water. The soaked burlap sack that surrounds you like a placental membrane now adheres to your nose and mouth like the smothering hand of a murderer, but by this time you have already looped your arms around your rope-bound ankles, have opened your handcuffs with the wire stowed inside your sleeve, have begun to pull the burlap down around your head.

You can inhale once more, perhaps twice if you are quick enough, before the last bubble of air escapes and leaves you there to do likewise or die.

This time, however, a miscalculation. You’ve forgotten the wire, or misplaced it, or dropped it in the darkness. The sack has been too securely tied above you. The false bottom refuses to slide open. You find yourself in an unforeseen circumstance: trapped, really trapped this time, in fifty feet of translucent water, your tricks useless, your strength and courage illusions, the clichés of Death pouring in on you like the collapsing walls of DeMille’s Red Sea.

A projectionist enters, on cue, his arms loaded with the usual slides --- Rorschach blots of passing clouds; lithographs of painful indiscretions, embarrassments, stupidities; an occasional shot of the wife and kids, or of your pet dog Alexander --- and as you watch, transfixed, so to speak, by the monumental nonsense of your own history, biology begins playing tricks on you. Pulse rates increase, bowels loosen, organs swell to embarrassing proportions.

It is not expected, then, that in these circumstances and at this point --- what the existentialists call the moment de desespoir --- you give a thought to the impatient crowd waiting anxiously above you for your resurrection. After all, what do you care for the bug-eyed, barrel-shaped old matrons, the bald impotent old men, and the rest of that hopeless lot who are looking to you, you of all people, for that peculiar fulfillment they themselves lack the wherewithal to seek? What are these mere spectators to you?

It pains me, here in my own parody of a womb, to explain this. You're not in that trunk just for the hell of it, you know. The people up there depend on you. They’ve paid good money to see your act. Think of them, then, before you give it up, standing pale and pathetic on that deck, expecting a miracle. Think of them as you yourself go down for the last time in their place, caught in the hopeless tangle of their diminishing dreams, weighted down by the ruins of your own useless techniques.

Yes, think of them, ripe for joy or disappointment, and escape, damn it, escape, you sniveling, self-centered charlatan, escape.

(Joseph Kosiewska was born in New York City in 1950. He holds a Masters in English Literature and has been publishing fiction and poetry since the late seventies, his work appearing in Pulpsmith, Aboriginal Science Fiction, Buffalo Spree, Phoebe: The George Mason Review, Psychic Radio, Isaac Asimov’s SF Magazine, and the Sunday magazine of the Buffalo News, among others. He spent several years teaching Freshman Comp at SUNY Buffalo, spent many more years in retail management, and was once a dressed extra in "The Natural," a baseball movie starring Robert Redford. He is the author of THE SECRET NATURE OF SPACE AND TIME, a story collection published by SynergEbooks. His novel BREAKING GLASS will be published next year. Currently he lives with his wife Jeanine in Buffalo, NY.)