I quit smoking when I was 24. I only drink socially – beer and red wines (and lately wine has been winning out). I dabble in sweets and candy, but I can generally pass on chocolate (unlike some people we know, ahem, Steve Almond).

So I primarily live an addiction free life. But then there are video games. I’ve got a ghastly jones for video games. Scary stuff. A few years ago, I’d forgo food to play 30 more minutes of “Baldur’s Gate” (Butt kicking for goodness!) When I was in my late twenties, I would frighten my roommates with my inability to just stop playing “The Legend of Zelda.”

It all started with Pong back around 1975. My father – a man not known for a predilection for gaming of any kind – came home from work one day with this bizarre contraption that hooked up to our console TV (which was about the size of a dishwasher).

The game is ridiculously low-tech by today’s standards. It consisted of two paddles and a square ball that you knocked back and forth; scoring a point if you succeeded in getting the ball pass your opponent’s paddle.

Pong was hypnotic and strangely addictive.

So began my descent into video and computer gaming. Please don’t inquire about “Icewind Dale 2” or “Wizardry 8.” Those wounds are still too tender to discuss. But let’s explore the games of the video arcade.

Remember video arcades? It was the 1980s version of an opium den, but located in a mall across from an Orange Julius. They were dim places with bill changer machines that always left you suspicious of technology’s ability to count properly. Boards of Selectmen hated video arcades and mothers would rather have had their children join Hell’s Angels than venture into the local “Fun-a-cade.”

But that’s where any self-respecting teen headed to spend his not-so-hard-earned allowances. Here are the DaRK PaRTY picks for the five most addictive arcade games of the 1980s (old-school):

Concept: A fixed spacecraft that can only move left or right fires missiles at swarms of insect like aliens. The aliens fly in formation across the screen and then lined up like the aliens in Space Invaders. The bugs then dropped bombs and dived down at the player’s spacecraft. The large aliens could capture the player’s ship and if the player killed it as it dropped, he would be rewarded with a double ship with double the firing power.

Why it Rocked: The speed and fire power were amazing. The best part of the game was the Challenging Rounds – where you couldn’t be killed, but got to test out your accuracy as a shooter. Kill all 40 bugs in the round and you got a big bonus in points.

Big Complaint: Players got addicted to the double shot – and if you only had one ship the game felt slow and clumsy. Concept: A player is a knight on a flying ostrich. Armed with a lance, he jousts enemy knights who turn into eggs when he slays them. The player then has to touch the eggs to fully destroy the enemy knights. If he doesn’t move fast enough, the player watches helplessly as the egg hatches into a stronger, faster knight. The goal is to clear a screen of four enemy knights. The landscape is cavern like – with five platforms – and a black background. The cool thing about Joust was that two players could play as a team or fight each as well.

Why it Rocked: The two player option made Joust the ultimate arcade game for the bar. Many an argument would erupt when players turned on each other after all the enemy knights were cleared. Joust was a tough game to master, but had an easy control panel and joystick.

Big Complaint: If a player took too long to clear a wave of enemy knights, a pterodactyl appeared and tried to collide with the player. It was nearly impossible to win a round if that damn pterodactyl showed up.

Addiction Factor: Losing only brought you back for more. 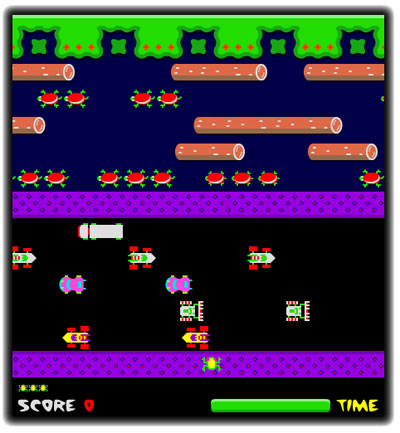 Concept: Believe it or not, but Frogger was about a frog crossing a busy highway and then hopping on the backs of turtles and logs to get across a river. You had to avoid cars and trucks and then alligators, snakes and otters. That’s pretty much it.

Big Complaint: Getting bumped off a log by an otter always felt wrong.

Addiction Factor: It was like getting hooked on Marlboro Lights. 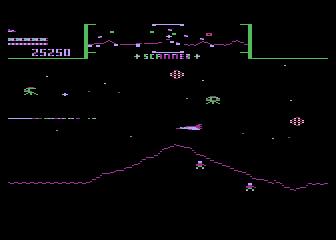 Concept: Stargate was the follow-up to Defender. The player flew a starcraft along a mountainous, alien terrain. The goal was to protect the humans on the ground from being killed or captured by various enemy ships. The player’s ship was armed with a laser like beam and also a limited number of “smart bombs” and the ability to cloak your ship in invisibility.

Why it Rocked: You were saving humanity! When aliens grabbed the humans you had to gun them down and if the human was too high in the air you had to swoop in and “catch” them on your ship. A very cool move once you got good at it.

Big Complaint: The player’s ship could fly through the landscape without crashing – which always seemed like a flaw in the design. The game was also very difficult for the beginner to master

Addiction Factor: Once you got good – you rarely left the machine. Concept: One of the more ridiculous concept’s in arcade gaming history (with the exception of maybe Donkey Kong). A yellow, feminine Pac-Man eats round discs along as maze while multi-colored ghost try to kill her. She has the ability to turn the tables on the ghosts by eating one of four large power pellets that turn the ghosts blue. She then eats them. You score points by eating the discs and eating the ghosts.

Why it Rocked: Ms. Pac-Man pretty much got rid of all the flaws of the original Pac-Man. And it was fast. The game had speed and we all know that speed kills.

Big Complaint: Once you became an addict – the intermissions on how Ms. Pac-Man meets and marries Pac-Man began uber-annoying.

Zombie games said...
There are now several games these days that so addicted and interesting to play and I also want to get copy of list of these arcade games and start playing it.
January 18, 2013 11:24 PM
Post a Comment
<< Home
Advertisements
DaRK Buttons