Spend too much time watching videos from MTV’s heyday (remember the astronauts and when the station actually played music videos?) and you get a bad feeling that the 1980s weren’t as cool as we all remember.

Disturbing questions emerge from our latest list of truly awful videos from the Neon Decade: “Should Lionel Richie have done some jail time for Hello?” “Did Crowded House channel the Village People for Something So Strong?” “Has Falco ever really run before?” And can somebody please give Steve Perry a goddamn hair cut?

Crowded House
Something So Strong

This gag-inducing video (it takes place in a barn with the frolicking members of the band wearing bright outfits and surrounded by fawning farm girls) makes Boy George seem like Rambo in comparison. The happiness being expressed by the band as they tease and dance and get into all kinds of mischief projects this into the realm of gayest video ever made. Yes, we all understand that they were going for a Mentos-kind-of-thing, but the satire is so subtle that it barely exists (see video above). Olivia Newton-John as a gym whore. She spends the first part of the video coyly flirting with a group of muscle-bound oafs in orange bikini briefs working out in some kind of neon, metallic gym. The next half she spends abusing a group of overweight men just trying to drop a couple of pounds on treadmills and exercise bikes. Poor bastards. The highlight is when she pours baby oil on the roly-poly (and probably carbuncle riddled) back of some unshaven ape. In the end though, the muscled guys all pair up (I’m not kidding) and Olivia ends up with the fat guy. And, oh yeah, she wears a white headband.

It’s difficult to be polite when it comes to Journey. So let’s just get this out of the way. They suck. And this video is exhibit number one. Steve Perry – who tries to look really intense here by bunching his finely plucked eyebrows – wears tight jeans and a checkered sleeveless t-shirt. But give him credit for sticking with the mullet. The best part of this video – with the exception of the mole on Steve Perry’s chin – is the band pretending to play invisible instruments. Now that takes talent. Don’t miss the keyboard solo!

We guess one shouldn’t expect much from a singer named after a spice. This is a cheerleader video so one should have expected them to hire actual cheerleaders for the filming. Alas, they hired a group of apparently drunk rejects who can’t get in sync. But worst of all is the dancing of Toni Basil. Oh. My. God. When did skipping and clapping at the same time become so difficult? Get ready to die of boredom. And, hey, Toni, fire your make-up arrest.

Doctor and the Medics
Spirit in t 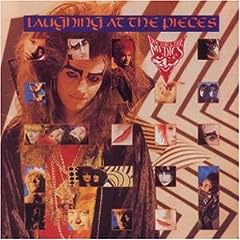 Say this about the good Doctor – he’s got better make-up than Toni Basil. But let’s face the fact about Doctor and the Medics – they were a KISS rip-off band – with less talent. The band’s video of Norman Greenbaum’s 1969 hit single displays its lack of creativity and originality. Nothing happens, except that the Doctor climbs a ladder. He’s a damn good climber. Get it? The song is titled “Spirit in the Sky” so the Doctor climbs a ladder to get closer to it. The best part of this miserable experience is the red-headed drummer who seems to be on the verge of quitting band during the video.

Give credit for beautifully blown dried hair, but we’ve got a secret – this video is retarded – earnest – but retarded. It’s a concept song gone completely haywire. “I’m not a hero! I’m not a savior!” Really? Who knew! The Japanese robots who dance like robots are more racist than the old Charlie Chan movies. There’s only one question you have after watching this: Why?

Here’s a free piece of advice: don’t film punk rockers on a beach. Punk rockers are so pale they’re practically blue and the bright sunshine makes them look like bottles of bleach. Punk rockers are also skinny and blotchy and look like shit in bathing suits. But the worst part of the “I Want Candy” video is that lead singer Annabella Lwin is displayed as a sexpot (even frolicking in a wet t-shirt and seductively licking an ice cream cone) despite being only 15 years old. One almost expects Lionel Richie to prance onto the screen and start stalking the poor girl. Then there’s the matter of the giant candy canes sticking up out of the sand.

Taco
Puttin’ on the Ritz

Beware of German pop artists. Taco’s face has more moves than a sock puppet on an epileptic. It’s scary expressive (and apparently he hired Toni Basil’s make-up artist because his cheeks glow like cherries). The most horrifying sequence here is the tap dance routine with Taco and a group of black-faced, tuxedo-clad men. Very politically correct. Taco even sports a day-glow cane – because I’m sure he thinks it’s very surreal. If you’re blue try watching this debacle.

Let’s also add a warning for Austrian pop artists. Falco (who is the lone survivor of triplets – which is creepy in and of itself) runs like a girl in front of a screen showing traffic. That’s it. It’s the entire video – Falco running and singing. Unfortunately none of the cars are real and don’t run him down. This may be the worst video on the list. The only way to improve it would be to have Lionel Richie chasing him.

Read the original 10 Really Bad Videos from the 1980s here