A Collection of Ancient Gods of Death and the Underworld

Death is ever enticing – a luring beacon that finally consumes us all. It’s the inevitable fate of every living creature. Death even takes entire civilizations (Rome and Maya for example). It is the destination we all reach. The finish line for all of us is rot, decay, and a return to dirt.

Yet most modern Western cultures have become quite adept at ignoring or avoiding any discussion about death. Ever try to bring death up at a cocktail party? There won’t be many takers.

The enormity of our mortality has spawned centuries of mythology around death. Most cultures from Greeks to the Aztecs have developed narratives and destinations for the lost souls – and the immortal caretakers who will greet us there.

Western civilization has given us Christianity – where we are guided to heaven’s door by angels and even saints. There, of course, we’ll find lots of bright golden light, fluffy clouds, and the throne of God and Jesus. We also have concocted the dreaded Grim Reaper, a scathe-welding figure in a dark cowl that visits us on our deathbeds.

DaRK PaRTY has collected some of the more interesting Gods of Death that ancient civilizations have bestowed upon us. When you come to the end of the line perhaps you’ll be greeted by one of them. Also Known As: The Unseen One, The Rich One, The Silent One (the Romans later adopted Hades, but renamed him as Pluto)

Symbols: Helm of Darkness (which makes him invisible)

Description: Despite being feared by mortals (priests averted their eyes when making sacrifices of black sheep to him), Hades was a rather passive ruler with a goal of maintaining a strict division between the living and the dead. He forbade the dead from leaving his kingdom and would become enraged if they tried to escape. His personality was rather dark and melancholy and he was not very popular among his peers. He spent most of his time in Hades ensconced on his ebony throne rather than cavorting with his fellow gods on Mount Olympus

Influence Today: Hell is often referred to as Hades in Christian mythology

Known Associates: Aerucra, the Celtic earth goddess, was his consort

Description: Little is known about Dis Pater, but it is believed that he was once a god of wealth, but eventually became associated with death because gems and precious metals were found in the earth. When the Celts and the Gauls were defeated by the Romans and integrated into Roman culture, Dis Pater morphed into Pluto, the Roman god of death Title: God of the Dead and King of Mictlan (the lowest level of the Aztec underworld)

Also Known As: Lord of Mictlan

Known Associates: His wife Mictecacihuatl and bats, owls, and spiders

Residence: A windowless castle on the 9th and lowest level of the Aztec underworld
Description: The most powerful of several Aztec gods and goddess of death. Priest who worshipped him sometime ate human flesh. He is most often presented as a blood-soaked skeleton, but to Aztecs the skeleton was a symbol of fertility and abundance

Influence Today: The Aztec gods are mostly forgotten, but there was a comic dedicated to Mictlantecutli and a heavy metal band from L.A. bears his name

Also Known As: Morrigu, Morrighan, Mor-Rioghain
Symbols: A crow, especially those crows that eat the dead after a battle. Also depicted as an eel, wolf, and a cow

Known Associates: Badb, the goddess of war, and Macha, a goddess of sovereignty

Description: She is often depicted a goddess associated with the violent death of warriors – sometimes interchangeable with her sisters Babd and Macha. She appears as a crow and various animals, but can also appears as an old hag

Influence Today: Another forgotten old god, but a German black metal band bears her name and she appears as a character in the video game series Capcom

Also Known As: He who is upon his mountain, He who is in the place of embalming, Guardian of the Veil Symbols: The color black, the flail, nine bows, and jackals

Known Associates: Son of Set, the Evil One, and married to Nephthys (also his sister)

Residence: The Realm of the Dead

Description: Most often portrayed as a black man with the head of a jackal and carrying a flail. Anubis is associated with rotting bodies and scavengers that ate the flesh of the dead. He was also associated with the embalming of mummies. He was in charge of admission to the Egyptian Realm of the Dead. Later, Anubis was downgraded to a minor god (losing out to the more popular Osiris) Symbols: She carries a dish called “Hunger” and a dagger called “Famine.”
Known Associates: Daughter of Loki. Her serving maid is Ganglot

Residence: Enormous estates called the “Halls of Hel” in a section of Niflheim (the mist world)

Description: She appears as a woman with half her skin black and the other half white. She is a gloomy, frowning woman. She is often associated with those who die from sickness or old age

Known Associates: His father Surya and his twin sister Yami. His commander is Lord Shiva, the Destroyer

Residence: The world of the dead and Hell

Description: Yama is portrayed with green or red skin and usually riding a water buffalo. He uses a rope to pull the souls of the dead from their bodies. He is considered the first mortal who died and then become the god and guardian of the underworld

Also Known As: Cryrillic and Volos

Symbols: Associated with dragons and cattle.

Residence: Slavs considered the world a giant tree. The branches were heaven and the roots the underworld. Veles, in the form of a serpent, lived coiled around the roots in underground caves and passages. Here he ruled over the dead.

Description: Often depicted as a snake or a dragon with the horns of a ram and having a long beard. He often sent heralds to the land of the living. He was worshipped at the beginning of winter when Slavs thought the border between life and death faded 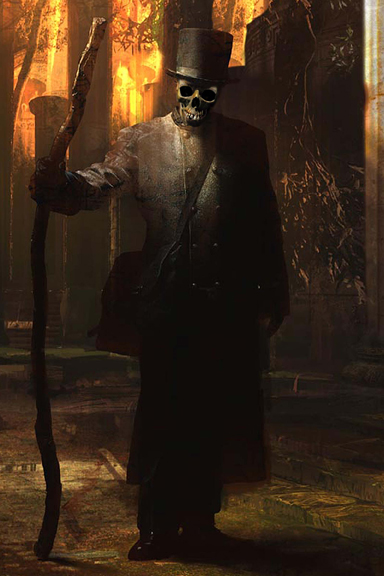 Title: Loa of the Dead

Residence: At the crossroads of where dead spirits journey to Guinee, the land of the dead

Description: Depicted with a white top hat and wearing a black tuxedo. He wears dark glasses over his white, skull-like face. He is fond of disruption, obscenity, debauchery, and his known to enjoy rum and tobacco

Influence Today: He was a villain in the James Bond film “Live and Let Die.” A British rapper goes by the same name and he’s been featured as a character in Marvel Comics as a villain of Doctor Strange.

Also Known As: Old Age, Old Woman, and She Who Stops

Residence: At the gates of death where she led the dead souls into the Underworld

Description: A woman with a veiled face. She is thought to be very gloomy and depressing

Title: God the Underworld and Punisher of Broken Oaths

Known Associates: He is associated with demons, monsters, and giants

Residence: Lived in the land of the dead

Description: A gnarled, hairy giant with a beard (may have been a Cyclops). He was considered a punishing and evil god

Influence Today: Orcus appears in several role-playing games as a demon prince and god of the undead, including Advanced Dungeons & Dragons, NetHack, and Empire of the East. He has appeared in comic strips as well.


A Question of God

The Death of Poetry

cheapest viagra said...
Hi, thank you for sharing this great info. Was just browsing through the net in my office and happened upon your blog. It is really very well written and quit comprehensive in explaining with a very simple language.
October 21, 2011 7:06 AM
Post a Comment
<< Home
Advertisements
DaRK Buttons