(Quick fire reviews of the books we’ve been devouring. A “cracked-back” is what happens to the spine of a new book once you’ve thoroughly torn through it. We’re always looking for our next read, so please feel free to make your own recommendations in our comments section. Read on!) 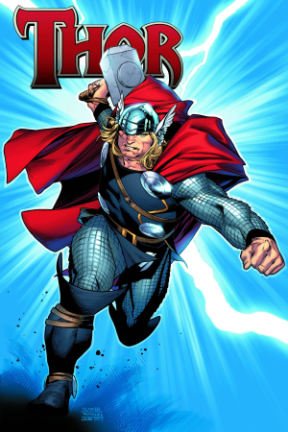 It’s difficult to think about Thor without the Kiss song “God of Thunder” reverberating inside my brain.

“God of thunder and rock and roll
The spell you’re under
Will slowly rob you of your virgin soul.”

But I digress. As a comic connoisseur in my youth, I never connected with Marvel’s comic book version of the Norse God (despite the fact that I’m half Danish). Thor was dull: the stiff in the room (especially when compared to the wisecracking Spiderman and the snarky intensity of Ironman).

But I have a new appreciation for the Thunder God thanks to J. Michael Straczynski and Olivier Coipel. Thor – who was retired back in 2004 – is brought back to life in a new series as a rebel God – powerful, but brooding – with an angry, seething intensity that hides a broiling compassion for human beings and their troubles.

Gone, thank All-Mighty Odin – is the ridiculous dialog. Thor is given a new sleekier appearance (complete with blue chainmail armor) and a new attitude – and it works like a charm. Olivier’s version of Thor is youthful, but war weary. His illustrations are simply stunning. They may be the best part of the book.

But Straczynski’s storyline has Thor’s first order of business as rebuilding Asgard – the home of the Norse Gods. He makes the Oklahoma desert his base of operations and scans the world for his fellow Gods (although the highlight of Volume One is a crash-bang battle with Ironman). There’s lots of potential to be mined here, although knowledge of the Marvel universe is required as Straczynski does a poor job of providing an adequate back story for those fans reading Thor for the first time. But we’ll be back for Volume Two.

First off, we love Matt Fraction – which is why we interviewed him a while back. Now that we’ve come clean on that:

Iron Fist was always a lame superhero; created by Marvel in response to the Bruce Lee craze in the 1970s. He wore the green pajama bottoms and appeared along side the more complex and always more interesting Luke Cage. Then he’d make rather pathetic guest appearances on Marvel Team-Up. He even died at some point – and then came back to life. Never liked him (and he was even a candidate for our list of lamest superheroes).

Thank Thor, we didn’t make that mistake, because the new series snap kicks major league butt. Iron Fist is finally given the back story that he deserves. In the new series, Iron Fist (Daniel Rand) is the latest of more than 66 Iron Fists than stretch back centuries – each generation getting their own version of the hero. The story introduces readers to Orson Randall, the previous Iron Fist, who broke his bond with the Iron Fist legacy and its leader K’un L’un and is living a life of drug addiction in Thailand.

A terrorist organization working for K’un L’un’s greatest emney – the Crane Mother and her champion, the murderous Steel Serpent, target Randall for death. Randall seeks out Daniel Rand and together they battle the enemy (and to say more would be a crime). But Volume One sets up a show down between Rand and Steel Serpent that is sure to shake the Marvel world to its foundations.

The artwork by Spanish illustrator David Aja using lots of dark inks – using shadows and light to effectively reveal character and give the new series a dark feel (most of the action takes place at night). His action sequences seem to move off the page and readers will find themselves wanting to practice swing kicks between chapters.

Here’s another graphic novel, however, that needs some background before plunging in. Novices to Iron Fist will probably find their heads spinning with all of the information.

By Jeph Loeb and Tim Sale What do you get when you combine crime noir with a superhero comic? You get “The Long Halloween” – one of the most critically acclaimed graphic novels in the genre. Once you start – it’s near impossible to put down.

Batman, a young Jim Gordan, and District Attorney Harvey Dent vow to bring down Mobster Godfather “The Roman.” But they are beaten to the punch by a mysterious serial killer dubbed “Holiday,” who begins to kill The Roman’s family and friends on each major holiday. Holiday kills them with a .22 and places trinkets representing the holiday near the dead bodies.

The story incorporates many of Batman’s most feared and popular villains – from the Joker to Poison Ivy. Even my favorite, Scarecrow, makes an appearance. There are great scenes between Batman and Catwoman – as they try to figure out if their animosity is real or just sexual foreplay.

But at the real center of story is the downfall of Harvey Dent, a respected and honorable DA. The graphic novel shows us his descent into cynicism and finally his transformation into the criminal psychopath Two Face.

The narrative expertly weaves the mystery – throwing up red herrings and giving us a wide range of possible suspects. Batman is a grizzled caped detective (think Mike Hammer in tights) – and one not unwilling to smack the bad guys around.

If you’ve always wanted to experience a graphic novel – then “The Long Halloween” is an excellent place to start. Action packed, compelling, and the art work is visually stunning.

The Legends of Literature: Comic Books