“The Guards” (2001) is a genre mystery in much the same way that “Moby-Dick” is a book about whale hunting. 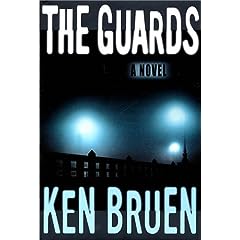 That’s about as far as I’ll go comparing the monstrous, densely written classic by Herman Melville and the Spartan poetic prose of Ken Bruen.

On the surface, there’s no reason why “The Guards” should work. The novel introduces us to Jack Taylor, who has become Bruen’s series character (now appearing in seven novels). Taylor is a collection of clichés: an ex-cop, a drunk, a hard case, a loner, and a closet bibliophile who reads poetry.

There’s even a scene in “The Guards” where Taylor is brutally pounded on by two burly cops (known as guards in Ireland) and ends up in the hospital. Waking up, and still severely injured, Taylor puts on his clothing and storms out. No hospitals for him!

Yet, Jack Taylor comes across and nothing short of authentic. Bruen skirts over the clichés – seemingly mocking them from the sidelines – and gives us a protagonist that rages against the dying of the light. A character that strides through the pages of “The Guards” like the reincarnation Dashiell Hammett’s Continental Op, but wearing a leprechaun hat.

Like Hammett’s amoral private detective, Jack Taylor has witnessed so much murder and misery that his sense of compassion, his humanity, has been worn down to a nub. Taylor skates along the edge of right and wrong – not quite sure where the boundaries are anymore.

And it works. Jack Taylor lives and breathes. As a reader, you believe in him.

Then there’s the plot – which is a mess for a genre mystery. Allegedly, Taylor is hired by a widow to investigate the alleged suicide of her teenage daughter. Yet, Taylor barely musters up the resolve to mount even a minimal investigation (hey, it might get in the way of his next bender).

But in the end – who cares? The plot is beside the point. The real star of “The Guards” is Bruen’s writing: elegant, stark, brutal, comic, and drenched with emotion. This is hardboiled crime fiction that could make James Joyce stab someone in the eye with a broken whiskey bottle.

And let’s not forget the setting: the coastal Irish city of Galway. Bruen nails it. He gives us Galway: the city streets, the old hotels, the ancient barrooms, the cemeteries, and the undercurrent of Catholicism, and, of course, the dialog. It sings.

There’s a certain satisfaction as a reader discovering your next novelist. Knowing that you’ve found a writer that you’re going to be spending a lot of time with – because you’re going to read everything he’s written. For me, right now, this is Bruen.

That’s really all that needs to be said.