(Quick reviews on the books we’ve been reading. A “cracked-back” is what happens to the spine of a new book once you’ve thoroughly read it. Please feel free to add your own list of recommendations by leaving behind a comment.)

As I Lay Dying
By William 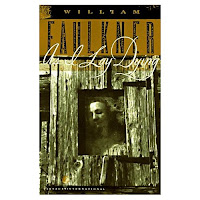 Faulkner is always a challenging read, but worth the effort. “As I Lay Dying” is no exception. In fact, it’s one of his best. The novel is broken into short chapters narrated in the first person by numerous characters – most of them members of the Bundren family. The clan is transporting its dead matriarch, Addie, to her hometown for burial. The family, crowded onto a mule-drawn wagon, experiences several disasters and semi-comic tragedies as they make the arduous sojourn. Faulkner’s stream-of-conscious writing is difficult to wade through at first as the point of view shifts rapidly with each chapter. The characters narrate in the moment and without much historical context. But that’s the brilliance of Faulkner. The story becomes that much richer and complex as nuggets of information reveal themselves. “As I Lay Dying” is a great place for readers who have never read Faulkner to start. The plot is relatively simple (although the characters are complex) and after the first part the style becomes part of the charm of the novel.

“Alex” is a graphic novel about a frustrated animation artist who burns out working at a large animation studio. He moves back to the blue-collar industrial city where he grew up to try and regroup, but finds himself on a steep emotional decline. He lives in an attic studio trying desperately to recapture his artistic fastball – but his excessive drinking leads him to destroy whatever he’s worked on in drunken rages. “Alex” is a nightmarish portrait of dreams gone awry and how success can’t always bring happiness. Kalesniko is one of the most underrated artists/writers working in the graphic novel genre. The artwork in “Alex” is stunning – simple line drawings, yet capturing the alienation of Alex and his hometown. The storyline is intense – especially when Alex turns against his only friend, the lonely Jerome (who lives at home with his born-again Christian mother). For those readers who don’t usually read graphic novels, “Alex” is an excellent place to start.

Breaking the Spell: Religion as a Natural Phenomenon
By Danie

This is one in a long list of books exploring religion and atheism. Dennett, a philosophy professor at , has been at the forefront of the atheist movement (and one of the academics responsible for renaming atheists “Brights”). This book asks more questions than it answers. Dennett calls for religion to be studied scientifically to find out how it affects human nature and our policies and governments. He also floats the interesting proposition that most people actually don’t believe in god, but believe in religion. The distinction is profound as Dennett argues that people like the structure and the straight-forward morality that comes with organized religion, but when push comes to shove balk at truly believing in an omnipresent, omnipotent being that controls all of our actions. “Breaking the Spell” is a bit clunky and Dennett cites his own works and other books on the topic often (so if a reader is unfamiliar with them, it’s easy to get lost). It’s a good supplement for those interested in the topic, but not so much for those looking for an introduction to atheism.

Robert Louis Stevenson deserves more credit as a novelist. He is rarely held up as one of the greatest writers in literature, but he should be. After all, this is the writer who introduced some of the most compelling and popular characters in literature: Dr. Jekyll and Mr. Hyde and Long John Silver. The latter, of course, stalks through the pages of “,” a pirate adventure against which all other pirate stories are measured. Long John Silver is a complicated character – wily old pirate with a missing leg and a secret cunning that allows him to play one side against the other while never truly announcing his own alliances. That because Long John’s only loyalty is too himself and his own survival. He is, by far, the most interesting character in “” and, indeed, the reason for the novel being considered a classic. The plot is straight forward – a young boy named Jim Hawkins discovers a treasure map in the belongings of an old pirate who died at his parent’s inn. Accompanied by his family’s doctor, he heads out with a suspicious crew to hide the treasure. The crew turns out to the crew of the pirate captain who buried the treasure. All sorts of adventures unfold in a delightful and suspenseful way. “” is a book for the ages and for all ages.