New DaRK
Blistering Barnacles! It's Tintin!
Under God's Right Arm: Satan's Game
Sand: A Fantasy Serial (Part III)
Essay: Should There Be a Minimum Wage?
The 7 Toughest Detectives in Fiction
5 Questions About: Visual Arts
When a Poem is a Wheelbarrow
Sand: A Fantasy Serial (Part II)
Literary Criticism: Edgar Allan Poe's "The Masque ...
Under God's Right Arm: Why Do Liberals Hate Jesus? 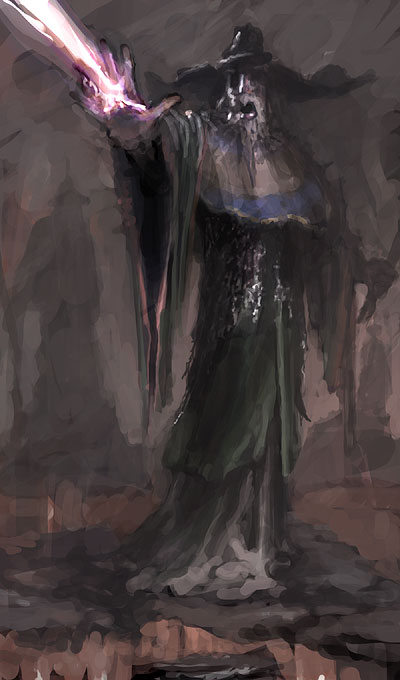 Chapter Four
Death in the Desert

(Welcome to the fourth chapter of Sand. We join Radric in the aftermath of his rescue of his sworn enemy, Caswell, and the half-elf woman, Quil, as they try to escape from the arid, barren landscape of the B’Kar Waste. Each week DaRK PaRTY is pleased to publish another chapter in this exciting tale of swords and sorcery. Sand was originally published in Lost Worlds: The Writers and Artists’ Science Fiction and Fantasy Forum.)

The mid-afternoon was sweltering. The sun, high above the B’Kar Waste, baked their bodies and turned the sand into a furnace. They plodded south, away from the D’jaren war party and Lindell. Radric had hoped to reach the Black Hills by nightfall, but he now realized that Quil and Caswell were too weak. The wizard sagged in his saddle, bleary and limp. They would have to spend another night in the desert.

Radric reined his horse and headed for a mammoth slab of sandstone jutted out of the desert like a broken finger. The outcropping provided shade; relief from the relentless and unmerciful sun. The heat was so overpowering, Radric almost wished he were wearing the midnight cloak – a dangerous proposition. His throat was dry, but he resisted the urge to drink. Their water supply was dangerously low.

He let Quil arrange his saddlebag as a pillow for the wizard before helping his dismount. She laid him in the deepest part of the shade. The wizard mumbled his thanks and promptly lapsed into a deep, troubled sleep. Radric was thankful he couldn’t see the wizard’s dreams.

As the Demimondaine dabbed Caswell’s forehead with the end of her robe, Radric studied her features. She was an exquisite beauty. Her movements were smooth and fluid. She was slight and slender; her features soft and gentle from her elfin heritage. Her golden hair was lush, like a satin tapestry cascading down her shoulders. Her eyes were large, ovals and a striking sea green; like an emerald sparkling in torch light.

“Are you his slave?” Radric asked her.

She turned and glared coldly at him. “I’m so much more.”

He smirked. “Loyal to the end.”

Quil stood, wiping the sweat from her face with the back of her hand. “End of what, warrior?”

He frowned, but didn’t answer. Sloppy. Why hadn’t he killed Caswell yet? It was foolish to let the wizard regain his strength. He had witnessed a weakened Caswell encase four D’jaren guards into ice pillars. Rested and healthy, Caswell would be too powerful to defeat with a sword. Yet for some unknown reason, he couldn’t muster the will to cut the man’s throat. He shook his head in disgust. Caswell deserved to die – the wizard had betrayed him, murdered the gypsy girl and the dwarf. He should be savoring this moment.

Radric removed his armor and dropped his sword next to him. He propped himself against the rock and bit into a dried piece of rabbit meat. Quil approached and she saw him studying the scars on his chest and shoulders.

“Who are you?” she asked. “At first, I thought you might be one of the Dark Tarkkum soldiers sent to save us. But you’re not. You’re something else.”

They both turned toward the wizard. Caswell had managed to sit up and was drinking from a water skin.

“That’s his name,” Caswell said to the Demimondaine. “Once upon a time he was a Defender. One of the realm’s elite swordsmen. I don’t know why he left – he never told me. Too much gore, perhaps? A scandal? I guess it really doesn’t matter. By the time, I met him in Vitoria he was a drunk and a thief.”

“What does he want?” Quil asked.

“Revenge,” Caswell said. “But once a Defender, always a Defender. He can’t do it.”

She looked back at Radric. “But why?” she asked.

“He has a conscience.”

Caswell smiled. “Ah, yes, the gypsy girl you bedded. Yes, I suppose I did. I should have killed you.”

Quil was astonished. “He’s an assassin?”

“Aren’t they all, my love?” The wizard climbed to his feet, leaning against the rock. “I’m going to finish what I left undone in Vitoria. Good-bye Radric and thank you. I was tiring of D’jaren company.”

The wizard raised his hands and a blast of lightning snapped from his fingertips and entangled Radric in its electric web. The force of the magic lifted Radric into the air; he bounced off the side of the rock, tumbled through the air and landed twenty feet away in a pile of hot sand. The smell of his burnt flesh pierced his nostrils.

He staggered to his feet, spitting sand from his mouth. Quil charged him, slashing with a dagger. He tried to move, but the blade slashed his chest, blood splashing onto the sand. He almost fell and that would have been the end of him. Quil threw the dagger to her other hand the lunged again. This time he pivoted and hit her across the face with his forearm. She sprawled to the ground with cry.

Radric broke into a run, grabbed his sword, and charged Caswell. The wizard was still dazed from using his magic, but he lifted his arms and muttered a spell. A funnel of fire screeched through the air. Radric roared in frustration and pain. He launched himself just as the flames consumed him.

He crashed into the wizard, barreling him over, smashing against the rock. He rolled to his feet, yanking out his dagger, whirling around. Radric’s sword protruded from Caswell’s chest, buried up to the hilt in flesh.

Caswell, his expression filled with bewilderment, fire still sputtering from his fingertips, rolled over and died.

(Next week the final installment of Sand! Chapter Five: Aftermath!)