Losing Faith in My Once Favorite Literary Gumshoe I’ve read every Spenser novel -- from his debut in 1974 in “The Godwulf Manuscript” to last year’s “Hundred Dollar-Baby.” I use the word “read,” but I really mean that I devoured them as if they were a plate of boneless Buffalo wings. I joined Spenser when he first met Hawk in “Promised Land” to when he got shot trying to salvage his love for Susan Silverman in “A Catskill Eagle.”

I admired Spenser for his no-nonsense approach to life and his code of honor. He symbolized strength, resolve, and determination, and who couldn’t be amused by his wry approach to danger? I liked the concept of Spenser as the tarnished knight in shining armor protecting the innocent and the weak against criminals and bullies.

So it is with a heavy heart that I come to grips with the fact that I want his creator, R 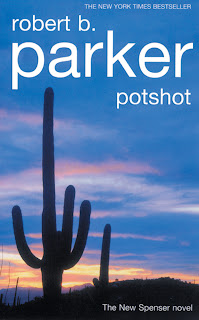 obert B. Parker, to kill the son-of-a-bitch.

There’s little chance of that. In a recent interview in the Boston Globe Magazine, Parker was asked if he ever considered killing Spenser. Never one to mince words, the ever-pugnacious Parker answered:

He also admitted that he had no plans to “off” sidekick Hawk or Spenser’s annoying girlfriend, Susan.

It’s too bad. I’m about to fill out the Penguin Group’s “Great Read – Guaranteed!” to get my money back on “Hundred Dollar-Baby,” which was so mediocre that it could barely keep my interest during an overbooked flight from Texas to Boston. I fully believe Penguin needs to give me my money back – and to throw in a couple of extra bucks.

The plot was slap-dash, the characters – especially the unlikable and unfathomable character of April Kyle – were tired, and the banter between Spenser and Hawk is becoming stale (I think they need a new act). This is prostitute April Kyle’s third appearance in a Spenser novel – and it has been two too many.

But real problem is that Parker has been losing his Spenser fastball for a long time. The reality of that startling, but obvious, fact came crashing down on me after reading “Hundred Dollar-Baby,” but it probably started with the ill-conceived, Western knock-off “Potshot” in 2002 -- where Spenser turns into Wyatt Earp.

After 35 Spenser novels (“Now & Then” comes out today), Parker’s shtick has gotten a bit tired. The books are blending together into a mishmash that’s difficult to discern. Hell, we don’t even get great titles anymore -- remember the good old days of “Taming a Seahorse” and “Pale Kings and Princes?” Now we get bland titles: “Double Play” and “Widow’s Walk.”

Spenser feels like he belongs in a recycling bin. Every novel is the same novel over and over again: 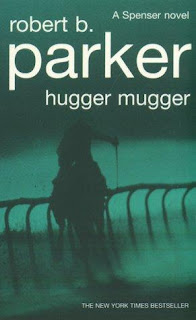 When I was a journalist, I has the pleasure of interviewing Parker before a talk he gave at a state college. He was a fantastic interview and a delightful speaker. I think Parker is an excellent writer – and should be credited with keeping the private eye novel alive during some very dark days. He's written some outstanding mysteries.

But even he has moved on to other protagonists – Sunny Randall and Jesse Stone. His two new characters have brought his writing back to life. He’s got new ideas and new characters to explore.

Spenser is a relic. He’s the old quarterback with the creaky shoulder and bad knees still trying to thread the needle – but tossing up more interceptions than touchdown receptions.

Parker should retire him with dignity.

With a bullet between the eyes.

Anonymous said...
Provacative suggestion and one that is only about 10 books too late. As much as it pains me, this series passed its prime some time back. Given that Spenser, Hawk, and an increasingly odd array of pistoleros are invulnerable to both fear and bullets, how much fun can their triumphs be? Even though Parker makes half-hearted attempts to acknowledge that time has passed (I think he mentions the 20 years several times in Now and Then that took place between that book and Catskill Eagle) nothing really changes as far as Spenser being all powerful. He's even gotten past the point where he makes deals with evil people to accomplish a greater good. Now he just pretty much wanders into every situation guns blazing. From someone who has a Judas Goat t-shirt someplace, it's a sad acknowledgement that I can now look at a bookstore, see that I've missed three of four of these awful timewasters, and just keep walking.
November 27, 2007 2:22 PM

GFS3 said...
Well said. The problem with the "pistoleros" is that they're all the same character wrapped in PC linings: the homosexual, the Latino, the Italian mobster, etc.
November 27, 2007 8:21 PM
Post a Comment
<< Home
Advertisements
DaRK Buttons