60 Years After its Release, "It's a Wonderful Life" Remains a Powerful Human Story


It’s difficult to watch “It’s a Wonderful Life” (1946) without a few tears splashing down your cheeks.

It’s a tearjerker, but the film isn’t maudlin or manipulative. “It’s a Wonderful Life” rises above that kind of trite nonsense and becomes a truly human film – a masterpiece in the tradition of Charles Dickens (but with an American backdrop). That’s the power of the film – viewers experience the turbulence and triumphs of George Bailey’s life.

Director Frank Capra – in top form – creates a complicated and complex man in George Bailey (played with amazing range by Jimmy Stewart). So much so that viewers feel his anger, relish in his bouts of happiness, and can’t help but rooting for him. Few films 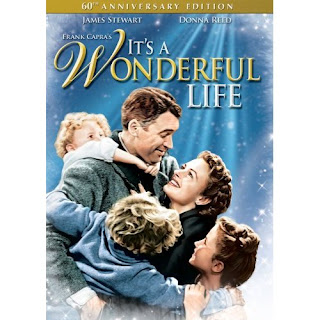 Bailey is in many ways unlikable. He can be a seething loudmouth (telling a boy dancing with Mary Hatch to stop annoying people). He’s got an explosive temper that he unleashes on his wife and on his uncle with shocking fury. He’s an envious, jealous man especially in his mixed emotions toward his pal Sam Wainwright who becomes a rich industrialist. He also falls into periods of depression and self-loathing.

Yet despite all of his flaws, Bailey has a sweet and tender side. He cares deeply about his mother and brother (sacrificing his own happiness for that of his family). He’s loyal to the core. Bailey’s a dreamer – a man who longs for adventure and “to build things,” but can’t muster the courage to move out of his hometown.

But Bailey doesn’t stand alone. He is given a supporting cast of original characters – all of whom bring their own histories, prejudices, and complications to the story. From his crazy Uncle Billy (who lives with squirrels and crows) to the wheel-chair confined industrialist Henry F. Potter.

Don’t let the holiday theme fool you. “It’s a Wonderful Life” is a dark film – disguised by its title and its reputation as a Christmas movie. But the movie is about a man’s lost dreams, his plummet into hopelessness, and finally into an attempted suicide. This is the story of a man who comes to despise himself so much that he wishes he were never born.

And what a triumph that the darkness turns to light. Bailey gets to redeem himself. Through the lens of his own death, Bailey is given the gift to discover the consequences of what would have happened to the people he cares so much about if he’d never existed.

The most chilling scene in this sequence is when Bailey stumbles through the snow of a cemetery and falls to his knees at the base of a gloomy tombstone. Etched in the cold stone is the name of his brother who drowned in a sledding accident when he was nine years old.

Clarence: Your brother, Harry Bailey, broke through the ice and was drowned at the age of nine.

Bailey: That's a lie! Harry Bailey went to war - he got the Congressional Medal of Honor, he saved the lives of every man on that transport.

The full impact of what he has wished for sinks into through his facial expressions (his eyes wild with fright and loathing, his hands trembling). It’s a powerful scene.

This darkness is what makes the ending so heartwarming. We watch the town of Falls rally behind its favorite son. They come out in droves to show support for this desperate man – this flawed, yet inherently good man.

And viewers see a mirror of themselves – what would it be like if we were in the same circumstances? Would people come out to support us? Would our families and friends be there? And that’s when the tears start.

Because George Bailey is all of us.

Read our ode to the Bourne Supremacy

Read our parody of "It's a Wonderful Life"

Labels: It's a Wonderful Life, Movies, Ode To