An Exclusive Interview with Glenn Mercer, Front man for the Feelies

(The Feelies were the “it” bad of the indie press back in the early and late 1980s. In fact, R.E.M. says the Feelies' “Crazy Rhythms” album was a major influence. The Feelies were a band that gave new meaning to guitar-driven rock. They infused punk and alternative stylings into classic rock components to create a unique sound. The band, which received rave reviews from critics, never quite broke into the mainstream. They broke up in 1992. But the music gods are kind and the Feelies are gearing up for a reunion tour this summer and possibly a new album. Glenn Mercer, the Feelies lead guitarist and singer, gave an exclusive interview to DaRK PaRTY.)

DaRK PaRTY: You started playing music with a band called Outkids in 1976, which evolved into the Feelies. Who came up with the name and why did you decide that the "Feelies" represented the music you were playing?

Glenn: I started playing music in bands for years before the Outkids, but that was the first one to play original songs. Bill suggested the name, from the book Brave New World. It didn't really have any connection to the sound, which was more traditional garage/punk early on. When the textures developed, the sound seemed to fit the name more, but it wasn't planned, it was a natural progression.

DP: Was there a philosophy behind the music? What were you trying to accomplish with the Feelies?

Glenn: We didn't discuss 'band philosophy', we just played, jammed, developed, like most bands, until we arrived at a sound. It was based as much on what we left out as what we put in to the music. Another factor is that we wanted to reflect the environment that we lived and worked in - the suburbs and the sounds within our neighborhood.

DP: "Crazy Rhythms" was released to amazing critical praise in 1980 (the Village Voice called it one of the best albums of 1980). What was your reaction to being an "it" band and having the music industry fawn all over you?

Glenn: I think we felt a little bit of relief, because we knew the record was unique and didn't really fit with much of what was around then. At the same time, we had the confidence that it would do well. We had recorded a four song demo that came out sounding real good, considering that it was done quickly in a small, bare-bones studio, so we had faith in our recording capabilities. We also realized that good reviews can only take you so far, and that many other challenges lay ahead.

DP: Despite the great reception to "Crazy Rhythms," the Feelies didn't release another album until "The Good Earth" in 1986. What was the reason for the delay and do you think it played a role in why the Feelies didn't become a commercial success?

Glenn: The delay was a result of the band breaking up and re-forming. The second line-up was in place by '83/84, so it wasn't that much time. We then spent a few years writing songs and securing a record deal, so we stayed pretty busy during that time period. We also had involvement with our side-bands, the Trypes, the Wi 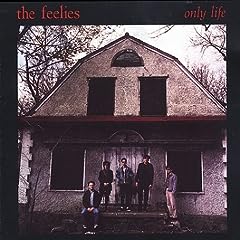 As far as the impact to our commercial success, I don't think we ever fit into the traditional idea of 'commercial'. At that time, during the late 80's, college radio was a major outlet for alternative music and we had a lot of success at that level. The long time between our 1st and 2nd record may have even helped the band in many ways. It gave us a better perspective on how and why we fit into the 'industry'. I think that we found that the business had changed in good ways, making it easier for us in the long run.

DP: Our favorite album is "Only Life"(1988) -- which kicks major ass. Can you tell us about how the album came about and your favorite song from the LP?

Glenn: “Only Life” began the same as the others, with a collection of songs written over the course of several years. This was our first on a 'major label', so we might have felt a bit more pressure to produce something that would take us to another level beyond the college market. At the same time, we felt very confident, having the success of the “Good Earth” and “Crazy Rhythms.” We recorded most of it at a top-level studio in in comfortable surroundings and it was a pleasure to make. My favorite song on that album is Higher Ground. I've had many people tell me that the song has been an inspiration to them, and you can't ask for more than that, as a song writer.

Bonus Question: It's been announced that the band plans to have a reunion tour this summer. Are the Feelies back and are you recording a new album?

Glenn: We're playing a few shows in N.J. and N.Y. and might play more in other places, like and . We're also working on some new songs, with the idea of recording another record.

5 Underrated Bands from the 1980s (includes the Feelies)

Highway to Hell: the 10 Greatest Songs by AC/DC

Splotchy said...
A lovely interview! Thanks for posting it.

I'm looking forward to their upcoming NJ shows, and the tantalizing possibility of a new album!
May 09, 2008 8:03 AM

best birthday party bar nyc said...
First off, the chef and coordinating staff is amazing. They totally worked with us to make our day turn out exactly as we wanted.
August 22, 2014 7:12 AM
Post a Comment
<< Home
Advertisements
DaRK Buttons