New DaRK
Thoughts from the Shadows: Seismic Changes in the ...
Our Favorites (and Not So Favorites) from 2008
5 Questions About: Haunted Places
Book Review: "Runner" Leaves You Breathless
"My Favorite Christmas Movie Is..." (Part 2)
"My Favorite Christmas Movie Is..." (Part 1)
Under God's Right Arm: Santa Claus is a Terrorist
Who Won the Free Copy of "Groundswell"?
12 Signs That You Might Be Santa Claus
5 Questions About: Crime Noir


In Marvel Team-Up #48, Spiderman teams up with Ironman to fight the mysterious Wraith. Befuddled by who is randomly bombing targets in New York, Spiderman and Ironman join forces with Police Captain Jean DeWolff. As DeWolff discusses the case, Spiderman mutters:

This, of course, is a quotation from Alice uttered in the classic novel “Alice’s Adventures in Wonderland.”

It’s moments like this when fans of comic books chuckle. Comic books have always referenced classic works of fiction. In fact, many comic heroes and villains have been directly inspired by literature and mythology.

There are the obvious ones: Thor, Hercules and Conan the Barbarian come immediately to mind. Then came “The League of Extraordinary Gentlemen,” the graphic novel that combined the mythology of superhero comics with literary characters (watch a clip from the movie above). The mash-up featured Captain Nemo, Dr. Jekyll & Mr. Hyde, the Invisible Man and even Tom Sawyer.

But there are a lot of comic books characters that are lifted directly from mythology and literature that are a little less familiar. Here is DaRK PaRTY’s list of our 10 favorite comic book heroes stolen from the pages of your college literary textbook.

The Comic Character: Icarus is a human mutant with the power of flight. He does, after all, have red bird-like wings growing out of his back. He can fly and has an extensive regenerative powers to heal from normally fatal injuries.

Literary Inspiration: The Greek myth of Icarus is that he the son of Daedalus. Father and son try to escape from exile from the island of Crete by fashioning bird wings made of feathers and wax. Daedalus warns Icarus not to fly too close to the sun or the wax would melt his wings. Caught in the exhilaration of flight, Icarus ignores his father’s warning and plummets to his death.

Literary Origin: From the poem in Pseudo-Apollodorus, but made popular by Ovid in the 15th century.

The Comic Character: Tar Baby is a human mutant that could secrete a tar-like substance from his skin. This allowed Tar Baby the ability to stack to anything that came in contact with him. The character wore raggedy purple trousers with patches and a rope belt and had black skin.

Literary Inspiration: The story of Tar Baby comes from African-American folklore. The tale has Br’er Fox and Br’er Bear build a doll out of tar (dressed in old rags) to capture Br’er Rabbit. When Br’er Rabbit talks to Tar Baby and it doesn’t answer he gets angry and starts to hit and kick it – only to become enmeshed in the sticky tar. He is caught and pleads with Br’er Fox not to be thrown in the briar patch. So Br’er Fox does and, of course, Br’er Rabbit is at home in the thicket and escapes. 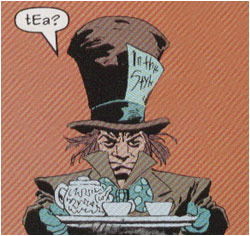 The Comic Character: The Mad Hatter is a paranoid schizophrenic obsessed with hats of all sizes. He’s also a genius fond of quoting from Lewis Carroll. He’s a criminal mastermind and a nemesis of Batman. While he has no superpowers, the Mad Hatter is a technologist and scientist who specializes in mind control.

Literary Inspiration: The Hatter from Lewis Carroll’s “Alice’s Adventures in Wonderland” (commonly called the Mad Hatter. However, he is never referred by this name in Carroll’s Alice books. He appears with the March Hare at a tea party – which never ends. In “Alice’s Adventures in Wonderland,” the Hatter asks the riddle “Why is a raven like a writing desk?” The Hatter doesn’t have an answer and the riddle remains just that: a riddle.

Literary Origin: “Alice’s Adventures in Wonderland” for published in 1865.

The Comic Character: The Valkyrie is a member of the Defenders. She has superhuman strength, slowed aging, hundreds of years of combat experience (especially with a sword) and the ability to speak with the spirits of the dead. She can also see death coming when a person begins to glow.

Literary Inspiration: The Valkyries in Norse mythology are winged female deities who carry off the spirits of slain warriors off the battlefield to Valhalla, the Norse underworld.

The Comic Character: Fagin is a human mutant with the ability to transform into a purple humanoid with spikes and enhanced strength. He resides (surprise!) in London and lists his occupation as terrorist. He recruits another young mutant to join the terrorist organization The Brotherhood by sweet talking him.

Literary Inspiration: Charles Dickens villain Fagin – a “receiver of stolen goods” and a “merry old gentleman” who is described as disgusting to look at. He is the leader of a group of children he recruited to pick pockets and steal goods. He sweet talks the children while he collects their stolen goods and hordes the profits for himself. The Comic Character: A dwarf with super strength, stamina, and speed. He was a member of the superhero team Alpha Flight. He was born Eugene Milton Judd in Canada and was a soldier, bouncer and secret agent before joining Alpha Flight. Marvel later created a second “Puck” who was the daughter of Eugene, but the comic did poorly.

Literary Inspiration: Puck is a fairy – really a mischievous faun – who also goes by the name of Robin Goodfellow. Puck is Oberon’s (the fairy king’s) servant and causes all kinds of problems when he gives a love potion to the wrong people.

The Comic Characters: The Morlocks are a group of mutants. They are considered “extreme” mutants that are unable to pass as humans due to their appearance. They lived in a series of underground tunnels beneath New York City. The members include mutants like Skid, who can create a force field around her; Feral, a cat-like human with fangs and claws; and the deformed Caliban, who can sense and track other mutants.

Literary Inspiration: A species of humanoid creatures from A.D. 802,701 who live underground and are described as resembling ants (although they have fur). They hunt in groups at night because they are extremely sensitive to daylight. They feed on a human like species known as Eloi (whom they reference to as “cattle”).

The Comic Character: She is a sorceress skilled in black magic. She has the ability to travel to other dimensions. She was an enemy of Wonder Woman. In order to keep being immortal, she needs to steal the life force from other living beings. She wears golden armor to hide her withered and aging body.

Literary Inspiration: Morgan Le Fay was a powerful sorceress and the enemy of King Arthur in medieval England. She is also King Arthur’s half-sister. Originally, she may have been a fairy before being portrayed as a human woman.

Literary Origin: She appears in Arthurian legends in Welsh mythology. Horsemen of the Apocalypse

The Comic Characters: A team of super villains called Death, Famine, Pestilence, and War. Many different mutants and superheroes have filled the various roles of the Apoclaypse including the Hulk (War), Gambit (Death), Polaris (Pestilence), and Sunfire (Famine).

Literary Inspiration: The four horsemen of the apocalypse appear in the Book of Revelations. Only Death is given a name, but the other three are described and known as Strife, War, and Famine. Strife rides a white horse and carries a bow. War rides a red horse and holds a sword. Famine rides a black horse and carries a weight balance. Death rides a pale green horse and is followed by Hades (or Pluto).

The Comic Character: A monstrous, simple-minded zombie made up up of swamp matter who is an enemy of Green Lantern and Batman. He has super strength and endurance and can return from the dead.

Literary Inspiration: A nursery rhyme character that was a riddle. Solomon Grundy lives his entire life in a week. The poem starts: “Solomon Grundy/ Born on a Monday” and ends with “Buried on Sunday/ That was the end of/ Solomon Grundy.” The name Solomon Grundy is supposedly from the English food Salmagundi (a salad made from cooked meats, seafood, fruit, and nuts).

Literary Origin: A 19th century nursery rhyme that was made mainstream by James Orchard Halliwell-Phillipps in 1842.

Viagra Sex said...
Yeah actually all characters in movies or comics are based in many ancient stuff... so there's nothing new to show to the public.
May 30, 2011 12:42 PM
Post a Comment
<< Home
Advertisements
DaRK Buttons