(Some people believe in ghosts. Some people also believe in Bigfoot, space aliens and compassionate Republicans. What can we say? DaRK PaRTY can understand the allure of the supernatural – we just draw the line at believing in it. Paranormal Investigator Jeff Belanger, however, draws no such line and by his own account has led a very haunted life. He’s been fascinated with the supernatural since childhood when he investigated his first haunted house during a sleepover. He’s the founder of Ghostvillage.com, a repository for his writings and research on the subject of the supernatural. The site has grown to become one of the largest paranormal communities on the Web, attracting hundreds of thousands of visitors per year. Jeff is the author of seven books including, “The World’s Most Haunted Places” and “Our Haunted Lives.” His latest book is “The Ghost Files.” Since its Halloween, we wanted to talk to Jeff about ghosts and, despite his busy schedule this time of year, he graciously consented.) 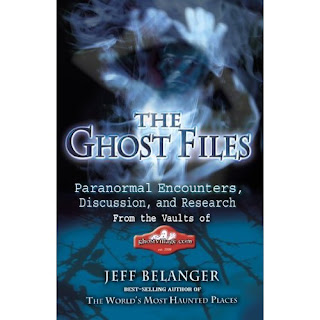 DaRK PaRTY: Do you believe in ghosts?

Jeff: Absolutely. Without any doubt whatsoever.

DP: What do you think ghosts are? Where are they in relation to the rest of us?

Jeff: That’s the real question. And I’m sorry to say that I’m just not sure. But I do know that ghosts are perceived as real by millions of eyewitnesses from all walks of life. They exist in religious texts, sometimes in history books, oral traditions are full of them, there’s a word for “ghost” in every language, and beyond the word, there’s an archetypal understanding of the concept.

There are several predominant theories as to what these specters are. One is that they are a discarnate soul—the person died and is still hanging around our plane of existence for whatever reason. Another theory suggests that in some cases, ghosts are merely an impression left on a location. For example, a witness may visit an historic battlefield and see a regiment of soldiers march across the field and then disappear. It’s not likely that this was a group of souls, but rather it was an event that took place at this location at some point in time and for some reason, some people are able to tune in to the event and witness it in the present-day. The soldiers aren’t intelligent or interactive; they just march over and over like a movie reel. Beyond that, the theories get more complicated and into the realm of quantum physics (which has postulated that time isn’t necessarily linear in all cases), or into the field of parapsychology which suggests that certain events like a poltergeist may be caused by living through some as-yet-unexplained power of the mind. In these cases, the witness may not even be aware that they are the cause.

From interviewing well over a thousand people about their ghost experiences, I’ve learned that ghosts are many things to many people. For some, it’s a supernatural sign of life after death. For others, it’s some kind of demonic warning. And then there are some cases where they just are -- meaning there didn’t seem to be a message or purpose, yet the phenomenon was witnessed and reported.

DP: Why do you think some places are haunted by ghosts and other places are not?

Jeff: There’s two parts to any haunting. There’s the location and whatever events (most often tragic events) occurred there in the past, and then there’s the living human witness. If there’s history (i.e., back story), and a witness who may be more sensitive to picking up on these supernatural things, then a legend will be born. Once others hear that a place is haunted, they focus on the subtleties of the environment and then more people start to experience unexplained phenomena. Once you have multiple witnesses over a period of time reporting similar events, the location will get a haunted reputation.

DP: Why do you think people are so fascinated by ghosts?

Jeff: Ghosts answer the big questions: Is there life after death? Every one of us is going to die someday, and just about all of us is curious as to what comes next. Various religions have their theories, but we don’t really know for sure. Ghosts are the least common denominator of spirituality. When a person sees what they perceive to be a ghost or spirit, that big question is answered for the individual. The answer is: something happens. There’s comfort in that.

Plus, ghosts are titillating, they’re beyond our normal understanding of how the world works, and people love a good mystery. Ghosts speak to something primal and magical deep inside us all.

DP: Can you tell us about Ghostvillage.com. What is the site hoping to accomplish?

Jeff: Ghostvillage.com is a Web site I started back in 1999—on a dark and stormy night just like this one… At first, the site was just six little Web pages that included two haunted places articles I had written for a newspaper I was working for back in the mid-1990s. On the home page I put a message that said, “Tell us about your ghost experiences.”

And the site exploded from there. Today there are more than 150,000 pages of content and the site receives between 6 and 10 million hits per month. We have people contributing articles and stories from all over the globe. The objective of the site is the same today as it was back in 1999: to promote the discussion and research of all things supernatural. It’s an open forum for people to share their thoughts and ideas and realize that they’re not alone.

Read our post on 10 Weird Deaths of Literary Figures here

Maybe I have been watching too much of discovery channels Hauntings , or maybe because it's October but something strange just happened.

I am sitting at my computer enjoying my morning cup of coffee reading news articles etc. when my bedroom lights just came on automatically! At first I thought my computer system (multimedia Max) had turned on my lights, but my home control was not even up and running just my max phone.

Should I consider this to be a true haunting or a simple electrical surge? I wonder if I should document it for the Vatican in case I need an exorcism? I think I will wear my garlic necklace all day just in case..... one thing's for certain no Discovery Channel this afternoon lol
October 16, 2007 6:24 PM

GFS3 said...
Hi Greg:
I suggest against adding Irish whiskey to your morning cup of coffee until the afternoon.

That should clear up the problem.

But I understand what happens when you watch too many horror movies. After a good slasher flick suddenly every creak of a floorboard is a maniac in a hockey mask.
October 16, 2007 8:01 PM
Post a Comment
<< Home
Advertisements
DaRK Buttons