( likes to say that his academic career comes in two flavors. He’s a professor of literature interested in romanticism, especially the Gothic and he still teaches English classes. But about 10 years ago he became fascinated by commercial culture, especially marketing and advertising. So he also teaches a course “Advertising & Culture,” which tries to interpret American culture in terms of commercialism. He’s specialty is exploring luxury consumption and religion. He’s written several books including “Branded Nation: The Marketing of Megachurch, College Inc., and Museumworld” and “Living It Up: ’s Love Affair with Luxury.” DaRK PaRTY talked to Professor Twitchell about shopping and what it means in today’s .)

DaRK PaRTY: What has happened to "shopping" in the ?

Jim: Not much; it's been pretty much the same for the last 100 years. Commentary changes, but buying stuff remains a central way of making meaning for life. That consumption is doing the "work" of religion is not new; it's the result of the Industrial Revolution. We're just changing the inventory of relics.

DP: Luxury items have become a huge commodity in the -- even for the middle class. Why are we so attracted to expensive brands?

Jim: They make us feel good. You buy feeling and the object is thrown in for free. Think Evian water. The value is not in the water, it's in the sensations. Ditto the Lexus.

DP: Have people become the brands they buy?

Jim: Well, sure, a bit but so what? That's like asking do people become the religions they worship. To a degree, yes, but the system of belief makes life meaningful. For a while, to some; certainly not everyone. As we grow older we shift brands. 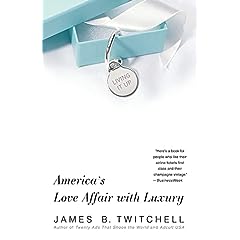 nsumers become too greedy? Why are we buying items we don't need?

Jim: "Greed" is a word I use to describe your consumption habits. Not mine. What is really at issue is taste. If you buy a Mercedes I may consider you greedy. If I do it its because I deserve it.

Almost 90 percent of what the middle class buys, we don't need. Need has nothing to do with modern consumption -- that's what makes it so interesting. This has never happened before in history. And it's true for great chunks of Europe, North America, and .

Jim: If what you mean is the occasional appearance of voluntary simplicity then, yes, but this has more to do with how some 45-year-old women feel about their lives as consumers than with how 18 year old kids feel. When adolescents turn against "needless consumption" then you'll know something interesting is happening. That hasn't happened. If we have a serious economic Depression, it will.