(Dan Kennedy is a Visiting Assistant Professor of Journalism at in . More than 14 years ago, he and his wife had a child with Achondroplasia – a form of dwarfism. The experience led him to write a book about his family’s experiences called “Little People.” The book is out of print, but copies can still be obtained at Amazon.com. More information can be found at Dan's Web site. Dan is also an astute observer of media and politics in and his opinions can be found at Media Nation.)

DaRK PaRTY: What was your initial reaction when your daughter, Rebecca, was diagnosed with Achondroplasia 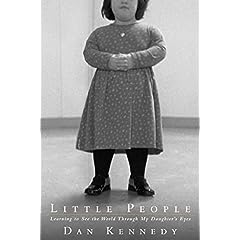 , one of the most common causes of dwarfism?

Dan: Dwarfism is not something we would have chosen for Becky, but I don't recall it as being particularly traumatic or depressing -- surprising, certainly.

I don't think we really came to terms with her dwarfism until she was five months old and nearly died of what for anyone else would have been nothing more than a bad cold. We learned she would need a tracheotomy and oxygen until her airways and rib cage had had a chance to grow.

For two years, our home was a blur of home nurses, medical equipment, and frequent trips to the hospital. That's when we really started to educate ourselves, as we realized that what we didn't know could kill our daughter.

DP: What has been the biggest challenge to raising a child who is a dwarf?

Dan: That's a hard question, because Becky's dwarfism has not presented any huge challenges to us. As I said, she had a trach for two years when she was a baby. She has some hearing loss, which in turn led to a learning disability. These are the issues we've had to deal with -- not her short stature per se.

I'm not sure why, but the horror stories that we've heard from other parents haven't hit us -- at least not yet. Sometimes people stare at her, but she seems not to notice. I've never heard anyone yell the "M"-word ("midget") at her. She has a small circle of friends who accept her for who she is.

Becky's 14, and starts high school next fall. So perhaps the biggest challenges are yet to come.

DP: In your book "Little People," you explore dwarf sub-culture. Can you give DaRK PaRTY readers a brief synopsis of that culture?

Dan: I can't talk about "the" dwarf culture; it's different for everyone. But Little People of America, the largest organization in the United States for dwarfs and their families, is at the center of whatever sort of organized dwarf culture there is.

In many cases, parents start bringing their dwarf children to LPA events when they're babies. Regional and national conferences provide dating opportunities for dwarf teenagers. Many times, the teens will drift away until they want to find a mate, at which point they return. And, increasingly, dwarf couples themselves become parents, beginning the cycle all over again.

I've seen estimates that, at any given time, LPA is reaching about 10 percent of the dwarf community. That may not sound like much, but if you take into account the numbers of people who drift in and out depending on what's going on in their lives, then I'm sure it's much higher than 10 percent.

A couple of observations --

First, as the dwarf community -- particularly LPA -- has become politicized, we've seen the rise of something that might be called "dwarf pride." This encompasses such things as terminology ("little people" and, increasingly, "dwarf" are acceptable; "midget" is not), the rejection of limb-lengthening
surgery as a negation of identity, and cooperation with other disability groups on common goals regarding access and equal opportunity.

Second, there is a hierarchy within the dwarf community as there is within any community. People with achondroplasia -- the most numerous and, generally, the healthiest -- can sometimes seem to place themselves above those with rarer, more disabling conditions, such as diastrophic dysplasia and SED.

I don't want to make too much of this -- in fact, some of LPA's top leaders over the years have had conditions other than achondroplasia. And consider the Roloffs, the stars of TLC's "Little People, Big World" -- Amy has achondroplasia and Matt, a past LPA president, has diastrophic dysplasia.

Still, within LPA, there is a perception that someone with an exotic, more disabling form of dwarfism is not going to be welcomed quite as readily as a healthy, attractive young person with achondroplasia.

DP: Your daughter is now 14 years old. There must be a new set of challenges for her as she enters adolescence, high school and the dating scene. How has she handled this period of her life so far?

Dan: One of the first things we learned after Becky's dwarfism was diagnosed was that kids with disabilities or any kind of profound physical difference tend to spend more time with adults than they do with other children.

That has certainly been true in Becky's case. She's got a couple of good friends, but she seems to have little interest in being part of any larger social circle. She's also surprisingly oblivious to what's going on around her.

Becky's involved in Girl Scouts, and in theater and creative writing. There are times when it seems like she exists in a bubble -- in her own alternate reality. I don't think it would be a bad thing if she could go right through high school like that. Adults with dwarfism have told us that adolescence was an incredibly painful time in their lives, but that things started looking up once they went to college.

DP: What is the biggest misconception people have about dwarfism?

Dan: That's a good question, and I'm not sure what the answer is, except that I suspect people have fewer misconceptions today than they did in years past. Shows such as "Little People, Big World," actors and actresses such as Peter Dinklage and Meredith Eaton, and a number of documentaries that have been broadcast over the past decade or so have done a lot to demonstrate that little people are no different from any one else, other than being very short and having a few unique though treatable health problems.

Years ago, some people might have assumed that dwarfs were mentally retarded, or that they didn't live as long as those of us who are average-size. You were also more likely to encounter someone with dwarfism in a freak show or in a degrading movie or TV program than you are today. We also live at a time when people at least pay lip service to diversity. It may still be difficult to be disabled, gay or lesbian, or part of a racial or religious minority, but certainly it's less difficult now than it's ever been.

Given that, I'm not sure what ongoing misconception people might have about dwarfs. What strikes me as perversely ironic is that this acceptance comes at a time when we're on the brink of being able to eliminate, through genetic engineering, dwarfism and all kinds of disabilities and differences.

We may embrace diversity, but we also fear it -- and I suspect we'd eliminate it if we could. Soon science will give us the tools to do exactly that. And something important will have been lost.

Viagra Online said...
this is one of the most interesting status in the world, and with many doubt to rest of the people, one of the doubts about this condition, is what happen if a couple of person who have dwarfism have a normal baby? what kind of complication bring this to the mother?
June 02, 2011 9:52 AM
Post a Comment
<< Home
Advertisements
DaRK Buttons