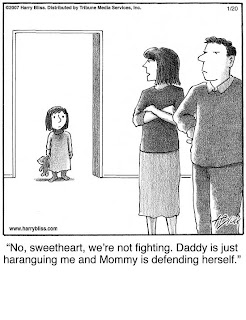 (DaRK PaRTY is a sucker for a good cartoon. That’s why one of our favorite comics (e

rr… panels) in the daily newspaper is “Bliss” by Harry Bliss. For lack of a better word, “Bliss” is edgy. Here is a comic unafraid to offend or to occasionally step over the line. Harry gets away with it because he’s funny – and also because he’s also a cover artist for The New Yorker. What better way to diffuse criticism about a dog who writes a love scene for his novel that includes sniffing the femme fatale’s ass than by claiming its high-brow art? Harry is also the illustrator of many children's books including "Countdown to Kindergarten," "Which Would you Rather Be?" and "A Fine, Fine School." Harry grew up in upper state and now lives in .)

DaRK PaRTY: You grew up in a family of artists in . When did you begin to realize that being an artist was your calling as well?

Harry: It’s funny; I’m convinced my ‘calling’ as an artist came very early on in my life. In fact, my mother still has a terrific conte crayon drawing of my umbilical cord I’d done in utero.

DP: Your artwork has been on the cover of 17 New Yorker magazines. Can you tell us your process for developing a cover for one of the best known magazines in the world? And which cover has been your favorite? 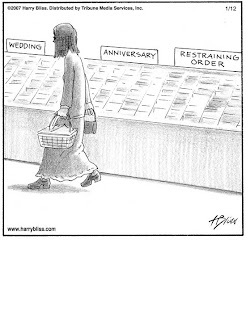 Harry: Creating covers for The New Yorker is all about ideas and it’s no different that cartooning for the magazine or my syndicate (Tribune Media). Essentially, ideas come to me all of the time, I take notes, discuss their relevance with friends and then decide which ideas are worthy of pursuing. If I feel strongly about one concept, I’ll draw it up.

I get ideas from other people as well. I have three gag writers and their contributions are extremely helpful. Thirty percent of my cartoons are collaborations and I love working this way. In the end, it’s not about ego… it’s about funny.

New Yorker covers…well, I send cover sketches to my editor and if she likes the idea, she’ll show it to the editor in chief and if he digs it, they call me…it’s that simple. These days I’ve been focusing on my cartoons, not so much covers, plus my children’s books take up a great deal of time.

My favorite New Yorker cover hasn’t run yet – the New Yorker bought it and has yet to run it. But I do like t 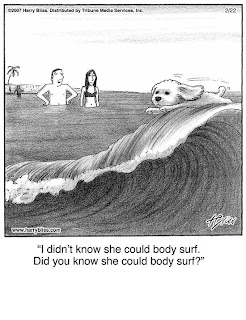 he one of the New York Public Library with the lion eating the pigeon quite a bit.

DP: You also produce "Bliss" -- a one-panel comic featured in daily newspapers around the country. How would you describe "Bliss" to those who have never read it?

Harry: ‘Bliss’ is probably the best single panel gag cartoon out there, no shit. It’s smart and funny and not afraid to offend readers – I get a lot of mail. I got two letters recently. The first one read: “I loath your comic strip.” That letter slayed me when I read it – really funny. I enjoy sharp criticism as well as praise. The second letter thanked me for filling the hole left when Gary Larson retired.

I work my ass off on the panel (not a comic strip!) and when readers write to me and tell me how they feel about the panel, it helps…not sure how, but I’m sure on some sub-conscious level I’m processing all of it and it has to effect my work. The panel will always evolve, if it doesn’t, I’m fucked.

DP: Your humor in "Bliss" is edgy and laugh-out-loud funny. Two recent cartoons stand out for me. The one with a couple in bed and the husband waking up the wife and saying: "Wake-up, baby, I figure out how my insomnia is all your fault" and the one of two parents addressing their young son with their fingers crossed behind their backs swearing they never tried drugs. Where do you get your ideas for the strip? 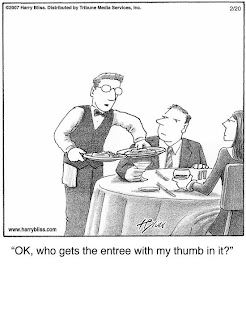 Harry: The ideas for Bliss come straight from my life…enough said.

DP: What comic strips do you find funny? And what illustrators working today do you admire?

Harry: I think Danny Shanahan and Jack Ziegler are great cartoonists. I like Alex Gregory and Charles Barsotti, too. I’m not a big fan of most of what I see. The cartoons are either too generic or they’re simply humorous captions with superfluous drawings. One thing to remember about good cartoons is that the drawing and the caption must rely on each other. One shouldn’t exist without the other.

Read our interview with Tony Carrillo of F-Minus