(One of the biggest disappointments in our lives was learning that Sherlock Holmes never actually utters the phrase, “Elementary, my dear Watson” in any of Arthur Conan Doyle’s novels or short stories about the Victorian private detective. Ah, well. But DaRK PaRTY has long been in awe of the astute detective from 221B in . We also like the fact that 58 percent of teenagers from believe that Sherlock Holmes was a real historical figure. How’s that for the power of fiction? We wanted to explore the world of Holmes in greater detail so we reached out to Mary Eichbauer, who helped create the “Discovering Sherlock Holmes” web site for . Eichbauer, who lives in Northern California, has a Ph.D. in Comparative Literature and plans to continue working on Stanford’s Continuing Studies’ Victorian Project when it resumes in 2009. Mary gave us an eye opening analysis of this mysterious literary giant.) 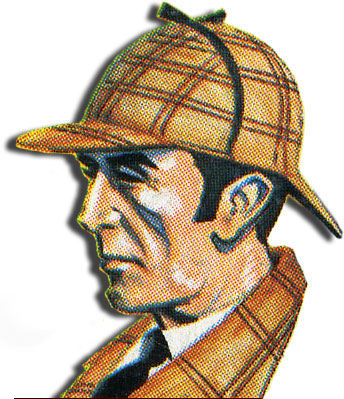 DaRK PaRTY: Sherlock Holmes is arguably the most famous literary character in world literature. Why do you think he remains such a popular character?

Mary: Holmes is popular not only for what he does, but for whom he is. His precursor, Edgar Allen Poe’s detective Auguste Dupin, exhibited a host of 19th-century bohemian eccentricities, but the ice-cold Dupin didn’t have Holmes’s active personality, his sense of justice, or his emotional flaws.

We love Holmes as much for his faults as we do for his superhuman talents. He doesn’t just suffer adversity from external forces, but from within. He can master the chaotic social and natural worlds, draw logical conclusions and trace horrific events to their sources, then mete out justice with an (almost) unerring hand, but he can’t master his own demons.

Holmes seems completely self-sufficient; as far as we know, he is a man of the world, and yet we have no hint that he has ever been involved in a love affair. Watson is apparently his only friend, though others admire him for his intellect. Like a person caught in a co-dependent relationship, the reader longs for Holmes to show a weakness, a trace of caring or humanity. Conan Doyle drops us a crumb from time to time, but we will never have enough of Holmes because we will never know what is behind the mask. Holmes remains so popular because he is a detective who has become a mystery himself.

DP: How would you describe the complicated personality of Sherlock Holmes?

Mary: Sherlock Holmes not only solves enigmas, he embodies one. He is brilliant, yet obsessive; logical and observant to a fault, yet unable to understand women; capable of the most astonishing mental leaps, yet stunted in his ability to form close human ties. Holmes epitomizes the addictive personality. Unsolved crimes are a drug to him; if he can’t have a case, he must have his cocaine. All these behaviors suggest a character who suffers from existential pain, pain that can only be deadened by obsession, or by drugs.

Throughout the stories, we hardly see a hint of where his torment might originate. Conan Doyle not only had the intelligence to create intriguing mysteries, he wisely kept us out of his creation’s head, while fashioning him in a way that is guaranteed to fascinate us. How did such a personality as Holmes come to be? Did he have an unhappy childhood? Was he deceived in love? We will never know, and yet we will always want to know. That is why so many authors have tried to solve the mystery that is Holmes by writing him into their own alternate universes.

I think we will always continue to have more Holmes-based films and fiction. Groups like the Baker Street Irregulars play what they call “The Game,” in which they analyze every flaw and inconsistency in the “canon.” By doing this, they weave a spell that almost brings Holmes and Watson to life and makes Conan Doyle into nothing more than an inept editor. I think we all play “The Game” to some extent when we read Sherlock Holmes stories; we always desire more out of our detective than we are given on the page, as if he were a real person.

DP: How would you describe Dr. Watson and his relationship with Sherlock Holmes? 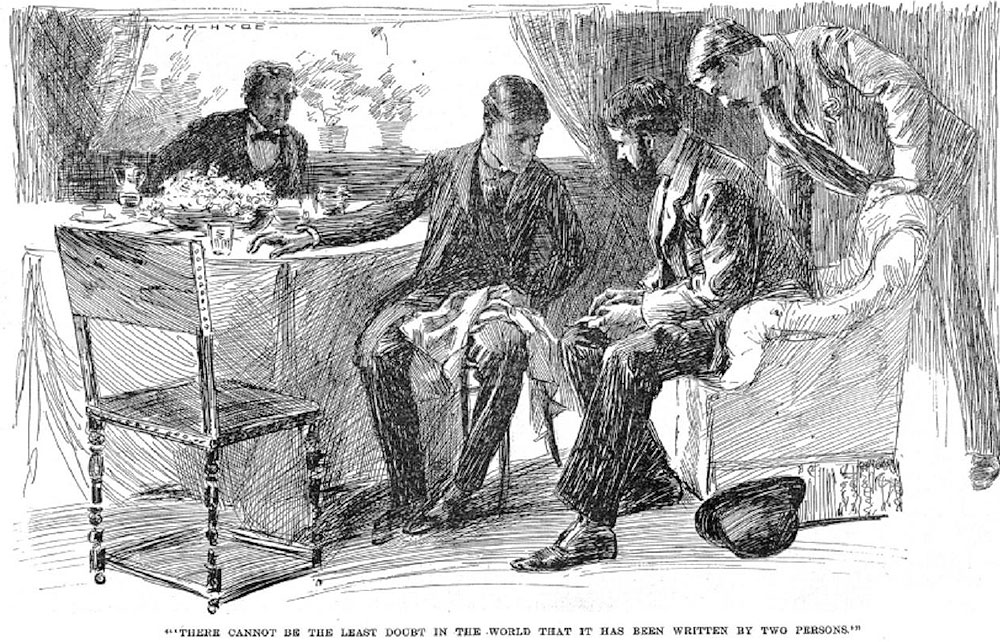 Mary: Dr. Watson is an ordinary man with ordinary abilities, and so he is the reader’s conduit to Sherlock Holmes, who would be difficult to identify with without Watson to serve as lightning-rod. Contrary to popular belief, Watson is not stupid; he is just a tad slower than the average reader. We often feel impatient with Watson when we catch on to one of Holmes’s deductions faster than the good doctor, and yet this device allows us to feel smugly superior. Holmes criticizes Watson for his shortcomings as a detective, but Watson is stalwart and loyal and a good sport; he is willing to follow Holmes into risky situations purely on trust. He is brave, even when he doesn’t have his service revolver, and he saves Holmes’s life once or twice (most obviously in “The Devil’s Foot,” when Holmes makes a rare, near-fatal mistake). Unlike his brilliant friend, Watson is susceptible to the charms of women, although, once married, he seems to spend much more time with Holmes than with his wife Mary.

It has been suggested that Holmes and Watson are more than friends, and fan-fiction exists that explores this premise thoroughly. It is an idea that is hard to resist. What avid Holmes reader would not want to envision Holmes and Watson living together forever in happy domesticity, solving crimes, and, incidentally, fulfilling all of each other’s needs? Certainly, the idea that they end their lives apart, as Conan Doyle implies in the final stories, is not appealing, and Holmes’s attempts to tell his own stories lack the interest of Watson’s. However you choose to view it, the dynamic of Holmes and Watson’s friendship drives and shapes Conan Doyle’s stories as much as their mysterious plots. The “buddy” shows that we watch on TV today owe their existence to that original pair of detective friends.

DP: How was Sherlock Holmes shaped by his era -- Victorian ?

Mary: Holmes is very much a Victorian gentleman, despite his bohemianism. Although he lives in disorder, uses recreational drugs and shoots holes into the wall of his sitting room, he is devoted to restoring order from chaos and is fiercely loyal to queen and country. Holmes is a man of his time in many ways: he keeps a stiff upper lip, only showing a hint of deep feeling in the most dire circumstances. He never questions British colonialism or, indeed, British superiority.

Occasionally his fine sense of justice conflicts with the law. Often, Holmes will allow a person who was driven to crime by some horrible abuse to escape the police, if he believes that the unyielding rule of law would commit a further injustice by punishing someone who was tormented beyond human endurance. By his actions, Holmes implies that the law is for the common man, while the gentleman’s code of honor adheres to a higher standard. Holmes’ attitude towards women is also typically Victorian: with one exception, women are to him creatures governed by emotion, who must be protected by honorable gentlemen. This exception is Irene Adler, the woman who tricks Holmes, using his own methods, in “A Scandal in .”

Arthur Conan Doyle believed that Holmes and Watson belonged in Victorian times, and so he kept them there. Post World War I was a sadder and less mysterious place than it had been before. The romance of foreign agents and opium dens and master criminals—all the elaborate, sensationalist machinery of Victorian genre fiction, of keeping the Empire safe from intrusion—paled before the reality that British colonialism was staggering towards its final days. Perhaps Conan Doyle’s unwillingness to face this bleak reality also accounts for his embrace of spiritualism. What made him a laughingstock in public life served him (and us) well as far as Sherlock Holmes was concerned. 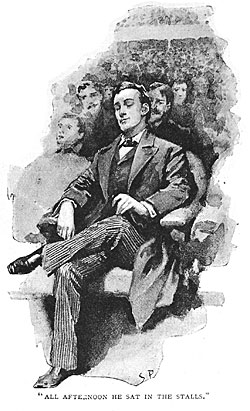 DP: What are your three favorite short stories featuring Sherlock Holmes and why?

Mary: My very favorite Holmes stories are those that give us a hint of the man behind the mask and develop his relationship with Watson. In “A Scandal in ,” Holmes makes a mistake and forever after admires the lady who fooled him. In “The Dying Detective” and “The Devil’s Foot” we see a more emotional Holmes, when the ties holding Holmes and Watson together are sorely tested. In “The Dying Detective,” Holmes takes cruel advantage of Watson’s loyalty as he does nowhere else in the canon, while, in “The Devil’s Foot,” Holmes thoughtlessly risks Watson’s life, and his own, for the sake of a chemistry experiment.

On the other hand, the early stories are the ones that have had the deepest influence on genre fiction. For pure cleverness, with a lot of thrill thrown in, I would choose “The Speckled Band,” “The Red-Headed League,” and “The Hound of the Baskervilles,” all of which have been so thoroughly plagiarized by posterity, that their plot twists are common knowledge. No matter. Holmes and Watson still manage to pull modern readers into their universe and make us believe that, to one with a logical mind, the disordered world, with all of its horrors, can be forced to make perfect sense.


Read our 5 Questions About interview on Jack the Ripper

Read our 5 Questions About interview on James Bond

Read our 5 Questions About interview on Elvis

SQT said...
So interesting. The funny thing is that I have never read the original Conan Doyle stories about Holmes but I have read books by Laurie R. King and Caleb Carr that feature the character. So far I'd say Carr is my favorite but I guess I should compare it to the original.
March 07, 2008 1:48 AM

GFS3 said...
I'd recommend picking up the "real" Sherlock stories. They are so much fun to read.
March 07, 2008 1:01 PM
Post a Comment
<< Home
Advertisements
DaRK Buttons