(Is there anything more delightful than discovering a new writer? As a book junkie, DaRK PaRTY sometimes gets giddy, rubs our hands together, and makes a noise like “Hoo Hoo Ha Ha” when that happens. A.W. Gryphon is a young novelist (and screen writer) on the verge of publishing her first book: Blood Moon. In the tradition of Kim Harrison, A.W. is a creating a new world – one populated by witches and those who hunt them. The book is coming out on April 28 -- a product of James A. Rock & Company Publishers. Blood Moon promises to be the first of a trilogy about witches. A.W. was kind enough to answer our questions about her passion for writing, her experiences as a first time novelist, and why she really enjoys witches.) 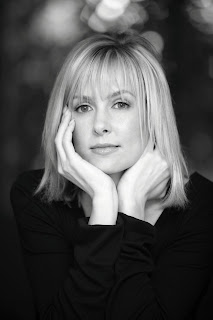 DaRK PaRTY: "Blood Moon" is your first novel. How long did it take to write and where did the spark of the idea originate?

A.W.: I’d been thinking about writing a murder mystery or a thriller that revolved around a witch for years before I decided to actually do it. Different ideas would come and go, then finally one day I knew what I wanted to do and I dove in.

I spent almost a year making notes, traveling and spending time thinking about the characters before I started writing. Once I began that process, I had the first draft in around seven or eight months if I remember correctly.

DP: Can you give DaRK PaRTY readers a synopsis of the book and main characters?

A.W.: Blood Moon is the story of Amelia Pivens Kreutzer, a young woman who is thought to be the world's most powerful witch by birth, but after her mother meets an untimely death during a scared ceremony, Amelia is no longer interested in having anything to do with The Craft… until she’s forced to.

She has been sought after for lifetime and anticipated for thousands of years. Now alone, years after turning her back on witchcraft, Amelia must realize that the clock is ticking and the hunt has begun. She must embrace who she is and sort out the mystery of the people who are after her just to stay alive.

The blurb on the back of the book is a bit of a tease, but at the same time, I think is says all that I want to give away to the reader.

An ancient line of witches…

One woman in the center of it all…

. Mysterious. Beautiful. Full of legends and lore. It is home and a safe place for Amelia Pivens Kreutzer. For an ancient society of witch hunters, and practitioners, it is an easy place to go unnoticed. And for Scotland Yard’s Denny Carlisle, on All Hallows Eve, when the Full Blood Moon reaches its highest point in the sky, it will become a city of awe and mayhem as the most powerful witch in modern history rises to avenge her lost love and end the ancient war among the witches and those who hunt them forever.

Blood Moon is a story about passion, justice, fear and all of the unknowns that are right in front of us. Amelia is an intelligent and beautiful woman with a tragic past who uses her passion to kick a little ass and do the right thing. It was fun to put together and I hope that all of the Dark Party readers have just as much fun reading it as I had writing it. 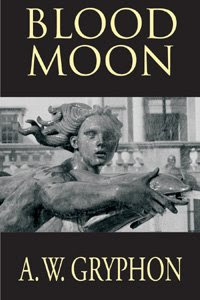 DP: Where do your fascination with witches and the supernatural come from?

A.W.: I’ve been fascinated with ghosts, vampires, witches and mermaids for as long as I can remember. I'm not exactly sure what drew me to witches above all else. I've always gravitated toward little talked about and seemingly misunderstood subject matter, as well as powerful and independent female figures and lore based in historical facts.

I grew up in the San Francisco Bay Area in the 1970s with a very liberal and fiercely independent mother. During that time I was fortunate enough to be exposed to many subcultures, witches in their various practices included. I'm sure that has a lot to do with it… that, and at the time, I had quite an admiration for Stevie Nicks, who was rumored to be a white witch herself.

Over the years I’ve found myself picking up books on the history of Witchcraft, Pagan practice and the beginnings of Wicca, always wanting to know more. With all of that being said, I hope I’ve answered your question. It’s simply a subject I can't seem to get enough of.

DP: You're also a screen writer with a film called "La Cucina" that took "Best Picture" at the International Film Festival and at Backlot Film Festival in LA. How does screen writing and novel writing differ for you?

A.W.: At the beginning a story is a story and there is not a big difference in writing a novel and a screenplay. The core of the work, the character development and the research is all basically the same process.

Once you get going on putting it down on paper it differs quite a bit. A book can be as long or as short as you’d like it to be and a screenplay calls for a very specific page count and a somewhat formulaic structure within that page count. You also have the luxury of being able to delve into all the senses and explore what a character feels, or what they're thinking, or how something smells, etc. in a novel. There are a lot of internal elements that you can work with on the page, that don’t much matter or translate to a screenplay format.

In addition, with a novel, the writer deals with the editor and that's basically it. In writing a screenplay there is the director, the cast, the producers and frequently other writers. Budgetary and scheduling matters must also be taken into consideration during the writing process. There are a lot more cooks in the kitchen and many more considerations to be taken into account in a screenplay. In “La Cucina,” for example, our leading man is Portuguese. He loved the dialogue, but it all didn't flow naturally for him so we made adjustments.

Overall, movie making is a team sport, where in writing a novel, you are really on your own. They are very different monsters to tackle and I love both of them.

DP: As a first time novelist, what were the biggest challenges of getting your book noticed and then published?

The biggest challenge was getting someone to look at the material. Most publishers won't look at your material without you having a literary agent and most literary agents won't take your call unless you have a published book. People don’t like taking chances on new writers. I’m very grateful to have found a publisher who is open and interested in the up and comers.

The second biggest challenge has been, and still is, my background in the film industry. There are absolutely people in the book world who have made it clear to me that screenwriters are not welcome and have no business writing a novel. To be fair, there are those who could care less, and those who embrace it, but so far they are few and far between. And when someone doesn't care for me or the novel it’s almost inevitable that the fact that I’ve made a living in the movie business is thrown out there as some sort of validation as to why the story isn’t to their liking. It’s all a bit insane and surreal.

That being said, at the end of the day, it’s worked out well. I’m with a publisher who adores the story and there is a very receptive community of readers who are looking forward to it, and I love it, and that’s all that really matters.

Read the winners of our short, short story contest