Saturday, April 12, 2008
Fantastically Bad Cinema: "Pirates of the Caribbean: At World's End"
Shiver Me Timbers This is a Horrible Movie

There are lots of grimy fingernails and blackened teeth in “Pirates of the : At World’s End.” Unfortunately, the blatant lack of hygiene may be the best part of this hopelessly terrible movie – which has no point, no plot, and will make you despise pirates for the rest of your natural born life.

The first “Pirates of the Caribbean” (2003) movie revived the concept of the pirate movie – mostly because of the inspired performance of Johnny Depp as the foppish pirate captain Jack Sparrow. The film – based on the Disney amusement park ride – was a mediocre affair, but Depp played Sparrow with such delight that the movie became a hit.

While flawed, the first “Pirates” movie at least had wit and energy and nice mix of acting and special effects. This mix was abandoned with without prejudice for the next two. Nothing can kill a movie faster than an overproduced sequel – except maybe two overproduced sequels.

The success of the first film led hyper-active producer Jerry Bruckheimer (who should also be punished for giving us the “Bad Boys” and “National Treasure” franchises) to make two more pirate movies. They were filmed at the same time – the dreadful “Dead Man’s Chest” (2006) and then “At World’s End” (2007).

Let us pray to every pagan god imaginable that there will not be a fourth.

“At World’s End” is so overloaded with special effects, action sequences, and a booming, steroid-laden musical score that the only outcome for viewers is a headache. 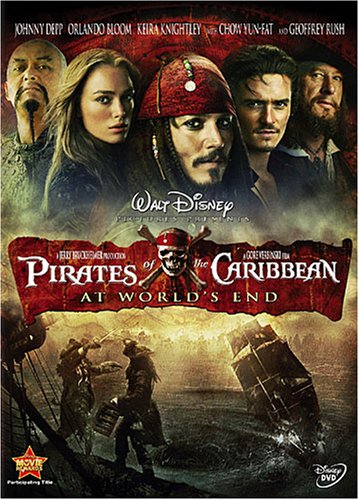 The movie is simply a mess. There’s some kind of plot about the pirates banding together to fight a corrupt English Baron who has taken control of the ghost ship, The Flying Dutchman, run by Captain Davy Jones. The pirates have to save Depp from Davy Jones’ locker (the plot of “Dead Man’s Chest”) because he’s a member of the pirate lords or some nonsense like that.

They rescue Depp from a desert (no really) and then all get together to fight the bad guys (although they’re pirates – so, in fact, they are the bad guys – so maybe they fight the good guys). But it’s difficult to keep track of all the alliances – who is good, who is bad, who is cursed, and, quite frankly, who is on what pirate ship. And in the end, it really doesn’t matter. If the producers, writers, and director don’t care: Why should you?

What’s most disappointing is Depp – who seems to be mailing in his Jack Sparrow performance from a hidden location. The edge is gone. The fun is gone. Admittedly, he doesn’t have much material to work with, but the performance seems strained – as if Depp realizes that enough is enough all ready.

Lost among the clutter are Keira Knightley and Orlando Bloom – the star-crossed lovers. Knightley, now a full blown pirate captain in her own right, and Bloom have one of the most ridiculous scenes in the movie. As they battle the bad guys (we think they were bad guys – or they might have been good guys who became bad guys – whatever), they decide to get married – while fighting.

Their swords dance and between kills they embrace, kiss, and hug, as Captain Barbossa (played by Geoffrey Rush) performs the ceremony – also while engaged in battle. The scene is tedious beyond measure and makes you want to remove a shoe and throw it at the screen.

But that’s how the action sequences work in “At World’s End.” They are so cartoonish and unrealistic that they all become pointless. And they’re non-stop – so one starts before another ends.

In the end – you hope the world will end. Or at least this franchise.

Read why "Cocktail" makes us want to get drunk

The 5 Best and the 5 Worst Superhero Movies

GFS3 said...
Hmmm. Not everyone likes the same things?

Praytell, Onyx, how do you determine ahead of time if you'll like a film before viewing it? I admire your ability to have never watched a movie you didn't like. You should put your secret in a box, shrink wrap it, and sell it at Best Buy.
April 13, 2008 5:31 PM

Anonymous said...
I know this is a horrible movie and the plot points all end up going nowhere, but I honestly enjoyed it.