New DaRK
Thoughts from the Shadows: The Thompson Question
Michael Connelly Book Winners Announced!
12 Signs That Your Wife Might Be a Superhero
Great Tunes: Jefferson Airplane's "White Rabbit"
Thanksgiving Movies Rejected by Hollywood
Gods of Death
5 Questions About: Stephen Crane
Nosferatu
Book Review: "The Guards" Scary Good
12 Signs That Your Boss Might Be A Zombie


“Tropic Thunder,” the movie critics darling from the summer of 2008, suffers from the massive sin of being slightly amusing and painfully disappointing (once you've seen the trailer there's no reason to see the rest).

Critics drooled all over it because Director Ben Stiller skewers Hollywood insiders and there’s nothing that movie critics fawn over more than a movie that savages directors, actors, agents, and filmmaking (because they all secretly hate the business). Besides, the critics can actually understand the in-jokes.

The movie was a huge marketing success – web sites, viral videos, and a massive push by “insiders.” It raked in more than $110 million to qualify for blockbuster status. The hype was that “Tropic Thunder” was raw and controversial (mental health advocates gave the film an enormous boost when they protested against the depiction of mentally-handicapped people in the film). 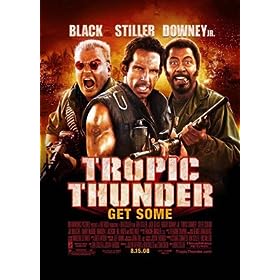 Unfortunately, “Tropic Thunder” is an overhyped dud done in by a lame plot, variety show quality gags, and the seriously defective acting of one Ben Stiller. And the supposedly no-holds barred gags? Saturday Night Live is more controversial.

Here’s the concept: a group of self-absorbed A-list actors are filming a Vietnam movie. Losing control of the movie, the director decides to take his pampered actors into jungle for some guerilla filming. A landmine kills the director and the actors – left on their own – are attacked by real drug-dealing rebels (and think the action is part of the script).

The plot, of course, only works if the characters are idiots – which they are.
Stiller has the acting range of a turnip. Like his character in “Zoolander,” who uses the same pursed-lip expression in all of his photo shoots, Stiller plays the same character over and over and over again. He’s the Groundhog Day of actors.
This time Stiller plays washed up action star Tugg Speedman (a cross between Rambo and Tom Cruise). He’s hopelessly insecure and utters dialog like: “Somebody said they were close to me?” And, of course, he pouts like only Stiller can pout.

Every time Stiller is on screen is a grating experience. You want to scream: “Stop the madness!” at the top of your lungs.

Robert Downey Jr. fairs better as the Oscar winning method actor Kirk Lazarus. Lazarus has a skin pigmentation process so he can play a black sergeant – and is completely in-character throughout the film. Unfortunately, the role limits Downey’s maniac comedic skills – and he ends up being a one-trick pony. The gag is funny – for about five minutes.

Then there is Jack Black, who is completely wasted as the drug-addicted “fat” comedian. The role is a cliché wrapped in a stereotype and delivered as a typecast. He actually bites a bat in half because it “stole” his drugs and is thrown half-naked over a water buffalo. Cheap gimmickry at its finest.

But the real problem with “Tropic Thunder” is the stupidity of the plot. Nothing makes sense. Once the actors get in the jungle, the film plays like a series of skits cobbled together with duct tape. It’s hard to watch without that sinking feeling in your belly that you have been duped.

“Topic Thunder” was so successful that it will probably spawn a sequel.

From Dusk 'Til Dawn

OutOfContext said...
Horrible, indeed. You know, the thing looked horrible from the outside and I wasn't going to see it, but a cousin of mine (who's in the business so he got all the inside jokes) loved it. I should have gone with my initial feelings. If you like the idea of the movie, watch Galaxy Quest instead. I also didn't get the controversy from the mental retardation groups--the script wasn't coherent enough to be offensive.
Lay off Zoolander, though, that's the good kind of stupid in my book.
December 03, 2008 7:11 PM

GFS3 said...
I like "Zoolander." At least that was funny.

Unknown said...
There is just a whole lot of funny people in this. I'd say Robert Downey steals the show but it's hard to forget Tom Cruise's awesome part as well. Ben Stiller is perfect too. McConaughey is brilliant in his limited (too limited I think) role.