New DaRK
5 Questions About: Pornography
Poem: Sunrise Over Worcester
5 Questions About: Jason Pinter
12 Signs That You Might Be A Banker
The 9 Worst Movies to Win Oscars
Book Review: Narrow Miss for "Above the Law"
5 Questions About: Screaming Blue Messiahs
What's Up With All the Fat, Naked Guys?
Thoughts from the Shadows: The Craziness of Publis...
How to Make a Damn Good Horror Movie 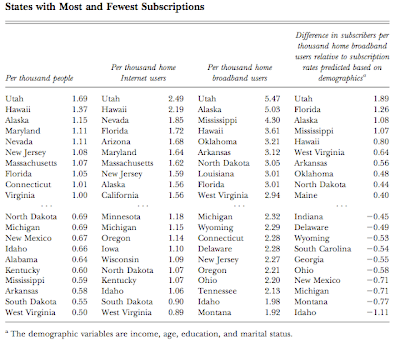 
DaRK PaRTY: You recently completed a study on the Web and pornography. Can you give us a birds eye view of the study and how you conducted it?

Ben: My article looks at all aspects of online adult entertainment – including where and how this material is produced and marketed, and also patterns in who tends to buy this material.

DP: How prevalent is the viewing of pornography online?

Ben: According to ComScore Media Metrix, 36 percent of web users browsed at least one adult web site per month. For certain age/gender combinations, the usage rate is as high as 45 percent. So online adult entertainment is quite prevalent -- used by a sizable minority of Internet users each month.

DP: One of the results from your study found that states that identified as more conservative and Christian had higher rates of pornography consumption. Why do you think that is?

Ben: It's hard to say for sure. One possibility is that despite the values commonly associated with these regions, residents of these regions actually disproportionately choose to partake in online adult entertainment.

Another possibility is that those who seek adult entertainment i

n these regions cannot readily find these materials locally -- for example, because local zoning rules or other restrictions make these materials hard to get locally. If so, those seeking these materials might need to get them online -- whereas people from less conservative regions could get what they wanted through more accessible, retail locations.

DP: Utah ranked first in pornography viewership online out of all 50 states. Can you give us a rundown of the top 10 and the bottom 10 what their numbers were and who they voted for in 2008 for president?

Ben: See Table 2 of my report. I favor using the third column of that table. That gives the state names, so you can cross-check with 2008 presidential outcomes (see graphic above).

DP: Has the stigma attached to viewing pornography online vanished? In other words, is pornography mainstream?

Ben: It's hard to say. For some groups, perhaps. For others, I doubt it. Adult entertainment remains disproportionately a private activity, and in many respects online access to adult entertainment further increases privacy -- no risk of seeing a colleague at a retail location.

The March sun rises over the cold Worcester hills
And his heart holds its mysteries silent and still
Grey as coal dust, this strange day breaks
And with the soft light of dawn, a new soul it takes

High above the trees, staring out across the line
Of the barren shade of beauty that still endures to shine
In the days about to come, in the weeks of recent past
The hope that has sustained me is ebbing now at last


(Josiah Bardsley lives in San Francisco where he spends way too much time hanging out in used bookstores and bars. He likes fog, small dogs and moonlit walks on the beach....really. This is his first submission to DaRK PaRTY)

Stars Get in the Way of Things