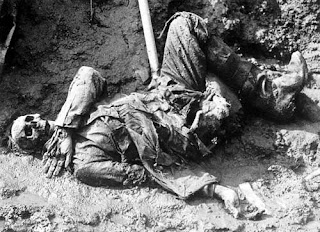 The recovery area of the Casualty Clearing Station is located in a portable hut with a canvas roof. The main staging area contains 10 rows of 20 trestle beds, all of them filled with wounded soldiers. At each corner of the hut is a coal stove to keep the CCS and the patients warm. Johan lies under a brown blanket, his abdomen wrapped in field dressing and his head taped with bandages.

A cool, clean breeze wafts through the opening clearing the fetid stench of sickness that has been hanging like a fog inside the hut. The winter day is unusually warm and sunny and from his cot Johan can see out of the tent flaps to white patches of melting snow. Horse-drawn wagons and the occasional truck rumble by and soldiers tramp along the muddy road.

Next to him, a nurse with round calves and thin ankles changes the bandages of an unconscious Algerian legionnaire, tossing the soiled dressing into empty petrol can. She sings a French lullaby in a soft, soothing voice. Johan notices that the Algerian is missing both arms and that his skin has turned the color of boiled cabbage.

The nurse’s singing distracts him from the canopy of moaning and groaning around him. He realizes that he lives in this den of pain and may have always lived here. He tries to remember how he came to this place, but can’t recall. No matter. He glances again at the nurse’s legs, watching the hem of her white dress slide upward over her smooth calves as she bends over the Algerian.

Settling back into his pillow, Johan stares at the ceiling, the sun filtering through the dozens of tiny holes in the canvas. He begins to connect the dots in his mind forming his own private constellations. The task makes him sleepy.

A legionnaire in a tattered great coat stops at the foot of his bed. The legionnaire holds a blue helmet in his hands, slowly rotating it. The man is Algerian with curly black hair and dark, olive skin. There is a look of relief in his wide, brown eyes. Johan thinks the legionnaire may be on the verge of tears.

The pretty nurse turns around and gives the Algerian a winning smile. Johan admires her delicate waist and brown eyes. The nurse and the Algerian converse in French. Finally, the nurse glances down at Johan, her face revealing surprise. Her clean smell washes over him and he thinks that it may be the best thing he has ever smelled.

She speaks slowly in a thick French accent. “You are awake. This was not expected and I must go fetch the doctor. Your friend here says his name his . He says you fought together in the same unit of the legion.”

“What’s your name?” Johan asks her.

She smiles patiently at him. “Do you recognize your friend?”

Johan shakes his head. “No,” he says. “I’ve never seen this man before.”

The smile fades from ’s face. He looks stricken. The nurse takes his arm and leads him away. They converse quietly for a few minutes. nods reluctantly and with a quick backward glance at Johan he walks down the row of cots and out of the recovery area. The nurse returns and takes Johan’s hand.

“How are you feeling?” she asks.

“I feel fine. My head throbs a little, but it doesn’t matter.”

“Nothing really matters anymore,” he says. “Didn’t you know that?”

“I must get the doctor,” the nurse says. “I’ll return shortly.”

Johan returns to watching the sunlit holes in the roof of the station. And then, slowly, the blackness returns and he slips off into a deep slumber.

He doesn’t wake up again until eleven months later in a hospital in .