Wednesday, December 03, 2008
The Toughest SOBs in Fantasy Fiction
These are the 7 Toughest Characters in High Fantasy

It's not easy finding a list of the toughest, bad-asses in Fantasy fiction -- so DaRK PaRTY created our own. These are the heroes (and anti-heroes) that know how to use a sword or utter a spell better than the rest. Any list, of course, is subjective. So if you'd like to add your own sword-swinging, spelling chanting favorite to the list -- please do. Description: Drizzt is five feet four inches tall and weighs about 130 pounds. His eyes are lavender and his hair as white as snow. His name is Drow translates to “Unyielding hunter who walks in the darkness.” Drizzt has a dark, violent side that he called “The Hunter.” He can control the hunter and sometimes calls on him in battle.

Origin: Drizzt is a Drow, a race of dark-skinned subterranean elves known for being evil. Drizzt, however, is an outcast with a strong sense of morals. While a skilled fighter, Drizzt prefers a peaceful resolution except with evil creatures such as goblins and orcs. He was the third son in his family and slated to be used as a sacrifice to the Drow god Lloth. He later escaped to the surface world and joined with a group of companions known as the Companions of the Hall.

Weapon of Choice: Drizzt fights with a pair of scimitars known as Twinkle (which radiates a blue glow) and Icingdeath, a blade that protects the bearer from fire.

Quote: “I knew right away that there was something special going on with Drizzt – just the way I felt about him when I first met him in the book. I couldn’t put my finger on it then, and I can’t now. I wish I could.” – R.A. Salvatore

Other Mediums: Drizzt is one of the most popular characters in the Dungeons & Dragons Forgotten Realms setting. He has appeared in more than a dozen novels, in the Baldur’s Gate, computer game series, and in graphic novels. There have also been rumors of a Hollywood movie.

Aragorn
The Return of the King

First Appearance: The Fellowship of the Ring (the first book in the trilogy “Lord of the Rings”)

Description: Aragorn stands six feet six inches tall. He is a dark and lean human with long, shaggy dark hair streaked with gray. His eyes are gray and set into a stern, pale face. He often experiences bouts of melancholy, but can be humorous at times.

Origin: A Ranger that often went by the nickname Strider. But Aragorn is really the heir to the throne of Gondor. His father was killed when he was a baby and the Elfin King Elrond raised him. His heritage was kept secret from him. He led the armies that ultimately defeated the Evil Lord Sauron.

Weapon of Choice: Anduril, a great sword used by his ancestors.

Quote: “This day does not belong to one man but to all. Let us together rebuild this world that we may share in the days of peace.” – Viggo Mortensen as Aragorn in “Return of the King”

Other Mediums: Aragon was featured in “The Lord of the Rings” trilogy, which has been made into several movies include Peter Jackson’s blockbuster trilogy. The books have also been adapted for TV, radio, and stage. Led Zeppelin even has a few songs that reference the trilogy including “Misty Mountain Hop” and “Ramble On.” And, of course, Advanced Dungeons & Dragons owes a huge debt to the series.

Description: A seven-foot tall northern barbarian. He is a thief and fond of drinking, eating, fighting, gambling, and most of all, stealing. He has a big heart and a lust for life.

Origin: Fafhrd and the Gray Mouser are sellswords in the mythical world of Nehwon. They are rogues who will take adventures from the highest bidder.

Weapon of Choice: The long sword named Graywand and a poignard called Heartseeker.

Quote: “His interest in writing came from a long correspondence with a close college friend, Harry Fischer. Together they developed alter ego characters: Nordic Fafhrd a tall gangly limbed individual from 'the North' - based on Leiber, and the effervescent Grey Mouser - based on Fischer. Leiber first featured the characters in a story, "Adepts Gambit", which featured a cast of creations in a world of mystic magic.” – Fritz Leiber obituary in The Times of London

Other Mediums: Fafhrd appeared with Gray Mouser in DC’s “Wonder Woman” in the early 1970s and later they appeared in their own title called “Sword of Sorcery.” 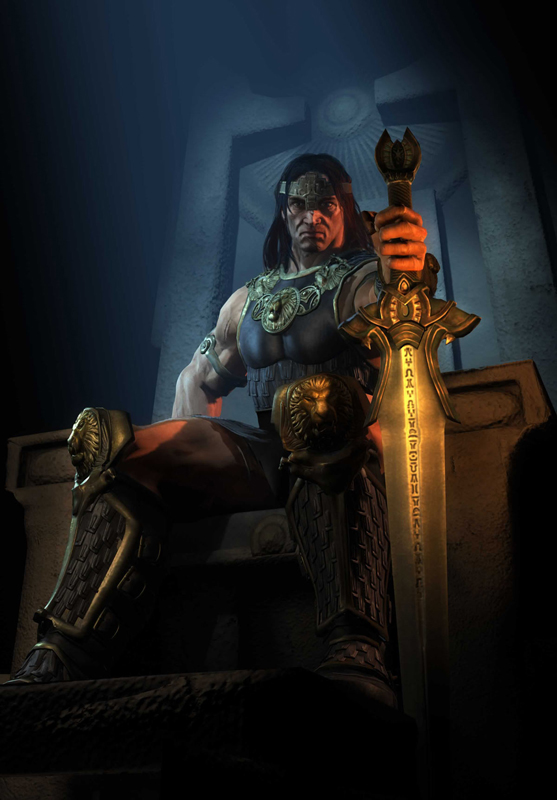 First Appearance: A fantasy story “The Phoenix on the Sword” in Weird Tales magazine.

Description: A black-haired, rugged barbarian from the northern tribes with dark, sullen eyes. Conan is six feet two inches tall and 210 pounds. He is barrel-chested with broad shoulders and heavily muscled arms. Despite being a barbarian warrior, Conan was sharp and intelligent. Honor was important to him (even though he spent part of his time as a thief). He spoke several different languages. He was also quite witty and had a big sense of humor.

Origin: Conan was born in Cimmerian, a cold snowy kingdom to the north. His father was a blacksmith. He was an experienced warrior by age 15 when he left home to wander the lands. He became a thief, a pirate, a mercenary, and an outlaw. When he became older he commanded armies and eventually he seized the crown from the king of Aquilona.

Known Associates: There are too many to list. Conan traveled with many comrades and associates, but didn’t stick with anyone for very long.

Enemies: Wizards, monster, and the King of Aquilona

Quote: “Crom, I have never prayed to you before. I have no tongue for it. No one, not even you, will remember if we were good men or bad. Why we fought, or why we died. All that matters is that two stood against many. That's what's important! Valor pleases you, Crom... so grant me one request. Grant me revenge! And if you do not listen, then to Hell with you!” – Arnold Schwarzenegger from “Conan the Barbarian” (1982)

Other Mediums: Conan has become one of the most recognizable fantasy heroes in the world. Arnold Schwarzenegger starred as Conan in two Hollywood blockbusters “Conan the Barbarian” and “Conan the Destroyer.” There have been animated features, comic books (including the long running series by Marvel), books, computer games, and toys. 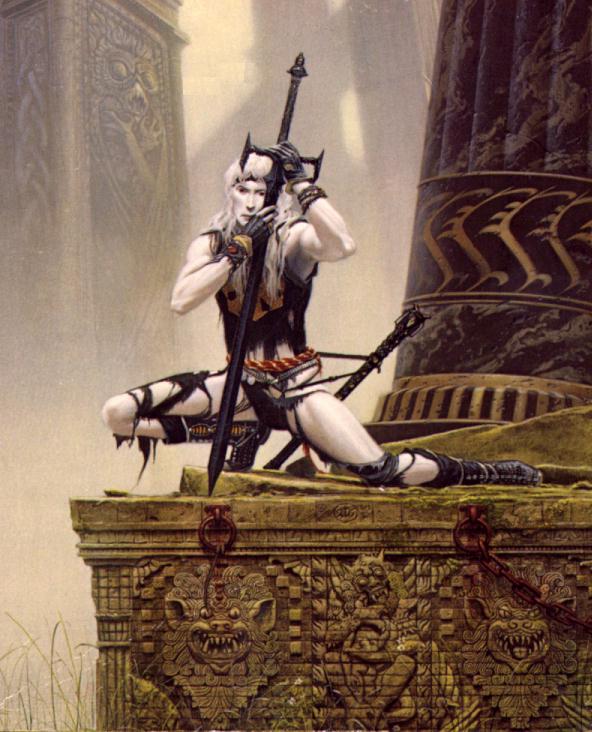 Description: A thin and frail albino with skin the color of “a bleached skull.” His eyes were slanted and glowed crimson. Elric needs to administer special herbs in order to maintain his weak constitution. Elric is moody, brooding, and full of self-hatred.

Origin: Elric is the last king of Melnibone, an island civilization that ruled earth thousands of years ago (before the rise of human civilization). His heritage gives him the ability to conjure spirits and supernatural creatures to help him in battle. He is constantly being undermined by his subjects and his family (including his power-hungry cousin Yrkoon).

Weapon of Choice: Stormbringer. An enchanted sword that give Elric strength, but requires that it be fed with the souls of those its slays.

Enemies: Yrkoon (Elric’s cousin who is his successor to the throne and plots his assassination) and Theleb K’aarna (a sorcerer)

Quote: “This sword here at my side don’t act the way it should/ Keeps calling me its mater, but I feel like its slave/ Hauling me faster and faster to an early grave/ And it howls/ It howls like hell.” – “Black Blade” by Blue Oyster Cult

Other Mediums: Elric has been featured in Advanced Dungeons & Dragons and in comic books. The song “Black Blade” by Blue Oyster Cult is about Elric. There are also rumors of a trilogy of films based on Moorcock’s Elric novels in production.

The Mysterious Druid of Shannara

First Appearance: The novel “The Sword of Shannara”

Description: Allanon is seven feet tall and fond of wearing a cloak and cowl to hide his intense looking face: shaggy eyebrows, a long flat nose, a black beard, and green penetrating eyes. He is extremely mysterious and rarely tells the truth about any situation. He’s very smart and compassionate, although he can also be ruthless to his enemies.

Origin: Allanon is a druid and has a lifespan much longer than normal humans because of his ability to sleep in suspended animation for long periods of time. He was the child apprentice of the Druid Bremen, who taught him the magic arts. At the time of his first appearance, he is the last of the Great Druids that lived in the city of Paranor.

Enemies: Jachrya, a monster who killed Allanon in “The Wishsong of Shannara”

Quote: “Terry Brooks wasn't trying to imitate Tolkien's prose, just steal his story line and complete cast of characters, and [Brooks] did it with such clumsiness and so heavy-handedly, that he virtually rubbed your nose in it." – Lin Carter, fantasy editor on “The Sword of Shannara”

Other Mediums: Warner Brothers owns the film rights to “The Sword of Shannara” and there is talk of a film in 2010 written and directed by Mike Newell. First Appearance: The novel “A Game of Thrones”

Description: A strikingly handsome knight with golden hair and green eyes. He is arrogant and amoral (once even tossing a young child out of a window). He lost his sword hand in battle and has started in reevaluate his life.

Origin: Jaime is a member of the House of Lannister, a noble family in Westerlands, and an elite Kingsguard. The family’s sigil is a golden lion on a field of crimson and their motto is “Hear Me Roar!” Jaime is one of the greatest knights of his generation and during the sack of King’s Landing he killed King Aerys and received the nickname “Kingslayer.” He has an incestuous relationship with his twin sister Cersei and the father of her three children.

Enemies: The House of Stark

Quote: “There are no men like me. There’s only me” – Jaime Lannister
Other Mediums: The series “A Song of Ice and Fire” is still ongoing, but already there are games, figurines, and online communities dedicated to it.


Our Interview with R.A. Salvatore

10 Westerns That Make You Want to Saddle Up

The 7 Toughest Private Eyes in Fiction