New DaRK
Essay: The Twilight of Reading
Comics for Literature Professors
Thoughts from the Shadows: Seismic Changes in the ...
Our Favorites (and Not So Favorites) from 2008
5 Questions About: Haunted Places
Book Review: "Runner" Leaves You Breathless
"My Favorite Christmas Movie Is..." (Part 2)
"My Favorite Christmas Movie Is..." (Part 1)
Under God's Right Arm: Santa Claus is a Terrorist
Who Won the Free Copy of "Groundswell"?

(Rapid-fire reviews of the books we’ve been cooking in the oven and then eating with a fine red table wine. And, of course, a “cracked-back” is what happens to the spine of a new book once you’ve thoroughly de-boned it. We’re always looking for our next read, so please feel free to make your own recommendations in our comments section. Read on!)

Josh Bazell, a newly minted doctor, received a seven-figure deal for “Beat the Reaper,” his debut crime novel that he wrote while an intern. Unfortunately, it’s difficult reading “Beat the Reaper” and not dwell on that enormous payday. It’s much like watching an overpaid baseball player – he’s good, but is he that good?

The good news is that “Beat the Reaper” is a nasty, little crime caper. It’s a crime farce with a cynical attitude and a slick style. The best part of the book is the first-person narrative voice of protagonist Dr. Peter Brown, a.k.a. Pietro “Bearclaw” Brnwa. Brown was once a mafia hitman and is currently in the Federal Witness Protection program studying to be an MD.

That’s where the reader lands in the story. One of Brown’s patients recognizes him. The deal is that Brown helps the patient live through his operation or one of his associates rats out Brown to the mafia family looking to take him out. It’s a delicious, wacky journey of cutthroat encounters with Russian gangsters, Italian wise guys, cranky nurses, desperate patients, and even a tank filled with man-eating sharks.

The one unfortunate part of “Beat the Reaper” is the ridiculous ending. It’s so improbable that you’ll find yourself rolling your eyes and groaning. But luckily Bazell has built up enough goodwill through is witty, stabbing style that you’re willing to forgive him for it.

“Beat the Reaper” is a blast (check out the video above) – a guilty pleasure (kind of like eating at a fast food joint). You’ll love it while your reading it (sans the conclusion), but you probably won’t remember reading it in six months. 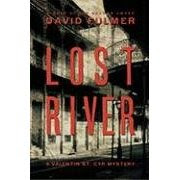 The fourth book in the Valentin St. Cyr mystery series by David Fulmer (who, as an aside, looks separated from birth from TV ringleader Jerry Springer). The mystery takes place in steamy New Orleans of 1913 in the red-light district called Storyville. Fulmer is a master of creating place – and readers will feel like they’ve been transported back in time. Storyville lifts off the pages and into the reader’s imagination. You can smell the seedy tap houses and jazz joints. You can feel the hot, sticky humidity.

The writing is beautiful. The prose rolls like jazz music and Valentin St. Cyr fans will welcome “Lost River” into the series.

However, there are some stumbling blocks in storyline. The first is the mystery itself. It’s like a street map that can’t be refolded correctly. The traveler tries to retrace the proper steps, but ends up with new creases and folds and finally out of frustration stuffs the map back into the glove box. The mystery – which has to do with a series of murders to take over Storyville – has too many logic lapses to make much sense.

One of the most disappointing details gone wrong is that St. Cyr has his regular pistol (the Iver Johnson) confiscated by the police and is forced to use a backup. Yet at the end of the novel, his regular pistol is back in his hands for the final confrontation. No explanation is ever given (Fulmer should reprimand his editor for the mistake getting into print).

There’s also a sense that Fulmer likes his main character just a bit too much. St. Cyr is a living legend in Storyville and Fulmer is only too happy to show us how he’s worshipped. Yet even with these two challenges, “Lost River” is a solid entry and a good read for anyone who enjoys historical mysteries.


Too Late To Die 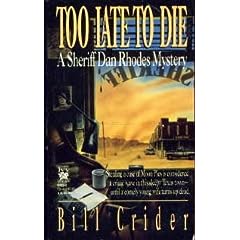 “Too Late To Die” is the first novel in the long-running Sheriff Rhodes mystery series by the delightful Bill Crider (if you haven’t visited his must-read Pop Culture blog – then what are you waiting for?). The Dan Rhodes series is like potato chips – once you have one you can’t stop.

They don’t write mysteries like “Too Late To Die” anymore. This one was published back in 1989 when there was such a thing as the Soviet Union and Milli Vanilli was the “it” pop rock group. “Too Late To Die” is a character driven mystery that takes place in rural Texas. It’s filled with interesting people – quirky, flawed, and always fascinating.

Sheriff Dan Rhodes, a middle-aged widower, is up for re-election in Blacklin County, Texas. And just in time for the campaign comes the murder of a young wife – who appears to have been mighty popular with a lot of men other than her husband. As Dan investigates, the roll of suspects starts to get rather large: a cranky storeowner, a homeless half-wit, a religious zealot, and his rival candidate for sheriff.

The mystery unfolds in rural Texas style – languidly until it gets fast and furious. But really the mystery (which has a satisfying array of twists and turns) is just an excuse to explore the eccentric nature of the characters. It’s these interactions, dialogue, and portraits that bring Blacklin County to life and make “Too Late To Die” so fun to read.

Dave Zeltserman said...
So GFS3, it seems as if you're implying that the 7-figure would've been better spent going to Bill instead, at least if there was any justice in the publishing world. I will say that's a damn cool trailer, shows what can be done if a publisher puts some money behind a book.
January 08, 2009 2:40 PM

Gary Dobbs/Jack Martin said...
A great blog - I discovered this from a comment on my own blog by Chap O'Keefe. I'll be visiting regularly and please check out my blog as there's some crossover between us in subject matter.
January 09, 2009 4:25 AM

GFS3 said...
Thanks Archavist. I've already taken a look at your site and will be visiting again.

And thanks, Anonymous, for placing a link to pornographic site on my blog. So consider it purged!
January 09, 2009 10:15 AM
Post a Comment
<< Home
Advertisements
DaRK Buttons