Friday, May 30, 2008
How Hollywood Ruined an Epic Poem
Why Beowulf Should be Read -- Not Watched


It was with great anticipation that we finally rented the DVD “Beowulf.” As enormous fans of the Old English poem about heroism (especially the masterful translation by Poet Seamus Heaney), we eagerly looked forward to the visual interpretation of the story.

We were left with stomach cramps and a strong desire to seek out director Robert Zemeckis at his favorite bistro and kick him in the nuts. They should have been forbidden to name the movie after the poem – instead opting for a more appropriate title: “Beo-Whimp.” Leave it to Hollywood to alter a story that has riveted generations for more than a thousand years because they didn’t it find the narrative gripping enough for modern audiences. So instead of trusting the material they did what they always do – dumbed it down by infusing it with an episode of Jerry Springer.

“Beowulf” – the poem – is the oldest piece of surviving English literature written around the 8th century. The poem is the epic tale of Beowulf, a warrior of the Geats (part of Sweden), who battles three antagonists: Grendel, a monster, Grendel’s mother, and later an unnamed dragon. He is killed in the final battle.

The poem is notable for the character of Beowulf – a hero who becomes king by testing his courage and strength against evil creatures of great supernatural power. He travels to Denmark to aid King Hrothgar and his court when Grendel, a monster and possibly a demon, terrorizes them.

Beowulf, without his sword, tears Grendel’s arm off in battle and the creature returns to his bog to die. While the Danes celebrate Beowulf’s victory, Grendel’s mother attacks the court and kills many while Beowulf sleeps in another dwelling.

Vowing revenge, Beowulf tracks Grendel’s mother to her lair under the bog and during an epic battle he slays her with a magic sword he discovers among her plunder. He returns to Geatland and eventually becomes king for 50 years. When a dragon attacks his kingdom, Beowulf tracks the beast to its lair and cuts it in half with a dagger. Poisoned by the dragon’s horn, Beowulf dies after the battle. He is buried in a barrow.

One would imagine that this heroic tale filled with blood, guts, and courage would be more than enough to satisfy modern audiences. But leave it to Hollywood to “sex it up” with its own misguided interpretation. The Hollywood hackers justified these flights of fancy by claiming Beowulf is an unreliable narrator. Here are the major changes: 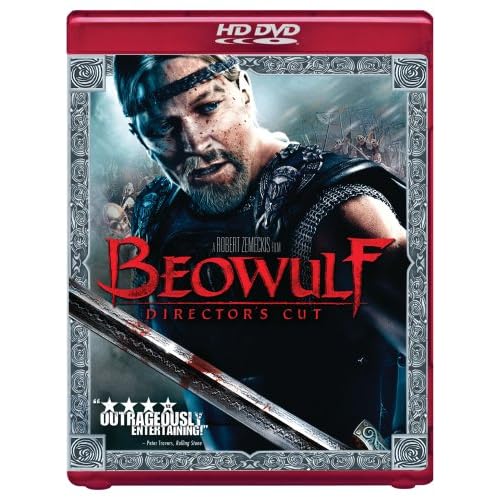 In other words, the entire point of the poem is tied up, dragged into a closet, and beaten to death with an axe handle. The real monsters are humans – who make the poor misunderstood Grendel an outcast because he looks different (not because he’s an evil bastard who dines on their flesh).

There’s no greater casualty than Beowulf. The noble warrior who risks all for others becomes a lying, boastful egotist – an adrenaline and sex junkie instead of an epic hero. He’s a thoroughly modern leader in the mold of CEO – flawed, greedy, arrogant, and completely self-possessed. The scene where he strips naked to fight Grendel (and then has his private parts covered in creative ways) plays more than Austin Powers than legendary warrior.

How can we say this? Oh, yeah: Beo-Whimp.

“The film changes the very nature of its hero. He becomes vulnerable and flawed, and he loses much of his nobility. The minute he starts lying, he becomes less interesting. The monster, Grendel, is also rather diminished here. He is imagined as a pathetic creature - you feel as if he's being eaten from the inside by maggots. I never had the sense of his enormous and terrifying strength. They've created a whole new plot about who slept with Grendel's mother, which feels clunky."

Bonnie Wheeler, director of Medieval Studies at Southern Methodist University had little use for the film as well:

“It’s a great cop-out on a great poem... For me, the sad thing is the movie returns to… a view of the horror of woman, the monstrous female who will kill off the male. It seems to me you could do so much better now. And the story of Beowulf is so much more powerful.

Our advice: buy the poem – avoid the film

Ode to "Dawn of the Dead" (both movies)

Bybee said...
The cover of that book is so great, it makes my heart beat a little faster. Onto the wishlist!

In reading this, I was reminded of how Hollywood effed up The Scarlet Letter with the indian attack.
June 02, 2008 1:35 AM

GFS3 said...
It's an intense cover -- Beowulf as the everyman hero, but also mysterious and unknown as well.

Shaun said...
"...a hero who becomes king by testing his courage and strength against evil creatures of great supernatural power..."

Not sure about this - I mean, I agree with you on the ruining of a good story by Hollywood and so forth, Zemekis definitely earned a nut-punting, but as to Beowulf the hero. I think as much emphasis in the poem is placed on Beowulf's deserving status as king because of his honourable behaviour (presenting gifts to, for example, the coast-guard who watched his ship, and Hygelac, the Geat king) and his political savvy (his foresight in seeing the downfall of a political marriage intending to heal a rift between the Danes and the Heathobards), as because of his prowess in battle.

Many lines in the poem extol Beowulf's warrior prowess, but as many lay an emphasis on the need for honourable action (especially generosity in gift-giving) and - for those in power - savvy in their decision-making and their fealty to those they rule.
May 16, 2011 4:06 PM

Mercedes said...
Why do you think chain mail suit was worn by fishermen from Scandinavia at the time of the fall of rome? After the fall of the Western Empire, much of the infrastructure needed to create plate armour diminished.
April 29, 2020 8:44 AM

Mercedes said...
The film is an independent work of art, who merit is obviously lost on this critic, as Beowulf was most certainly lost on most people around the time it was writen for not having been written by a norse man.
April 29, 2020 8:47 AM
Post a Comment
<< Home
Advertisements
DaRK Buttons