Friday, May 16, 2008
Cracked-Back Book Reviews: May 2008
(A quick glance at the books we’ve been reading over the last several weeks. A “cracked-back” is what happens to the spine of a new book once you’ve thoroughly read it. Please feel free to add your own list of recommendations by leaving behind a comment.)

The Age of Innocence
By Edith Wharton This one is a crier. But it is also a scathing rip at upper crust society -- particularly New Yorkers of the 1870s. Make no mistake about “The Age of Innocence” -- its a masterpiece and a joy to read. It's one of those books perfect for curling up on the couch with a warm cup of tea. In fact, it demands it. It is the story of how the narrow minds and strict protocols of society stifle the love affair between Newland Archer and Countess Ellen Olenska.

Archer is firmly entrenched in high society, yet experiences flashes of rebellion at its fastidious rules about appearance and reputation. He becomes engaged to May , but falls passionately in love with her cousin, the countess. The countess has fled a bad marriage to her Polish husband and causes a scandal among the elite with her blunt personality and worldly outlook. Bending to the will of society, Archer marries May and they fall into a loveless and joyless union.

Yet his love for the countess never falters. He he remains trapped in a marriage to May until her death 25 years later. When he has a chance to see the countess again in Paris, the widowed Archer decides against it. The reader can decide if it is because his memory of the countess is better than his reality or if he now embarks on a love affair with her if he's admitting to his own weakness at having failed to pursue her 25 years earlier. “The Age of Innocence” is a powerful and heart-wrenching story – and one that every bibliophile should devour. Fangs and fast guns. This is Matt Maxwell's great idea for a mash-up – combine a Western with a werewolf story. Think about "High Noon" superimposed on "American Werewolf in London."

The result is “Strangeways: Murder Moon,” a rip-roaring graphic novel that delivers scares and shoot-outs. The story features Seth Collins – a Western arch-type (the quiet loner with a quick gun). Collins ventures out West to meet up with his estranged sister and gets attacked by a werewolf while riding shotgun on a stage coach. When his best friend Webster is accused of being the werewolf, Collins sets out to capture the real monster.

There are lots of subplots and hidden agendas in “Strangeways” and some of them can be difficult to navigate. The character of Collins is also a problem as he often seems more like a conduit and plot device rather than a strong central character. But for the most part “Strangeways” delivers on its promise. The art is dark and moody – and there’s plenty of fast action to keep readers turning the pages. The graphic novel also contains an extra at the end – an excellent origin story for the werewolf, which puts an entire new spin on the main story.

If you’re into lycanthropy and six-shooters – you may have entered Nirvana. 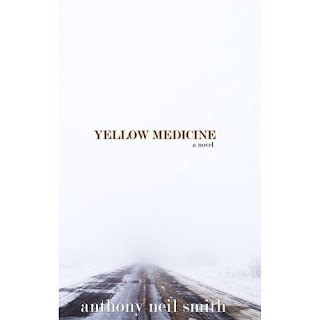 You are not going to like Deputy Sheriff Billy Lafitte. Why? Because he's a bastard.

“Yellow Medicine” is a rocket ride of a thriller set in plains of rural that pits the Lafitte against a group of ruthless Middle Eastern terrorists. Smith has created a slickly repulsive anti-hero in Lafitte, a law officer who likes to work the angles on the criminal fringe. Lafitte is a snake charmer and a bully and many readers will have a hard time relating a character that preys on young women and callously endangers his friends.

Yet the strength of the novel is the voice of Lafitte – and watching how he adapts and changes when confronted with the difficult situations he falls into. Deep down, Lafitte has a soul, but unfortunately it rarely manifests itself. The plot stumbles a bit (how the terrorists get to the flatlands of , for example, takes a leap of faith). The novel could also have done a better job of centering itself and given readers more insight into the larger picture. However, watching Lafitte in action is a delight (even if you cringe at a lot of his behavior). “Yellow Medicine” is more character study than the typical plot-driven thriller – and for the most part that’s a good thing.

All Quiet on the Western Front

“All Quiet on the Western Front” is one of the greatest anti-war novels ever written. It’s vivid portrayal of the horrendous conditions and life threatening dangers of trench warfare during the Great War. Paul Baumer is a young, enthusiastic student who joins the German Army at the outbreak of the war with and . But as the months turn into years, Paul becomes a hard-bitten soldier who understands all to well that the horrors he has witnessed have destroyed his innocence and possibly his ability to ever live a normal civilian life. The graphic details of the trenches, the combat, the hospitals, and the mindset of the average German soldier of the time, make “All Quiet on the Western Front” a fascinating slice of history. But the narration by Paul and the characters that make up his unit provide an emotional backbone to the novel that sticks with a reader long after putting the novel. “All Quiet on the Western Front” gets our highest recommendation.

Neil said...
Yeah, I can dig that about Billy Lafitte. As for terrorists, well, they're really *wannabe* terrorists. Amateurs. They think selling meth to hicks is the best way to finance their "mission". But they're kinda stupid about it.

Anyway, have you read SNITCH JACKET by Christopher Goffard? It's another great character study of a couple of slimebags. And I've recently discovered the John Galligan "Fly Fishing Mystery" series. I'd avoided them for a long time because, duh, it sounded painful. Like nail-gun-through-your-hand-to-drown-out-the-American-Idol-finalists painful. But then I read a few pages. Wow. You just wouldn't believe how good these damn things are.
May 18, 2008 11:01 AM

GFS3 said...
Thanks for stopping by Neil. It really was a blazing cool read -- even if I wanted to smack Billy a few times. I'll definitely be reading your next one.

I've not read "Snitch Jacket" nor "Fly Fishing Mystery" series. In fact, the latter does sound painful (like all the times I was forced to fish with my father). But I'll give them both a try.
May 18, 2008 8:14 PM

Bybee said...
The Age Of Innocence is on my glittering Pulitzer Prize pile. Edith Wharton was doing what Henry James was doing, but so so much better!

Dwight said...
As much as I enjoyed "The Age of Innocence", there's something about it that troubled me when I read it (and even thinking about it now, 15 years later). Wharton mercilessly skewers the hypocrisy of the age--it was considered OK to do certain things as long as you followed the proper protocol.

Yet I'm not sure why the book bothers me. I didn't expect Wharton to give an alternative to the codes and mores of the day. Or even to articulate any benefits from the charade sometimes played out in society. Maybe it's just wondering what Wharton would say today...

Regarding the movie, I really wanted to like it but I guess I'm one of the few that could not stand the direction--the techniques being used distracted significantly from the story for me. A decidedly minority view for film buffs, but no one's ever accused me of taste or insight.
May 19, 2008 4:28 PM

GFS3 said...
No, I'd agree that the film doesn't live up to the novel. It's slow and doesn't possess the great internal monologues of Archer Newland.

If you think "The Age of Innocence" rips high society, Whartons "House of Mirth" is supposed to be even more brutal. Can't wait to sink my teeth into that one.
May 19, 2008 10:25 PM
Post a Comment
<< Home
Advertisements
DaRK Buttons