(The beautiful thing about literary characters is how they can transcend the pages where they were born. Some characters become so engrained into the cultural psyche of society that the classics where they originally appear become a footnote. How many people, for example, have read Mary Shelley’s “Frankenstein?” Yet, Frankenstein’s monster is an icon of our culture – you don’t have to read the book to understand the monster. The monster is everywhere – in movies, comic books, on lunch boxes, TV shows, in jokes.

DaRK PaRTY wanted to see how ingrained some of these legendary characters have become – especially in the world of business. You’d be very surprised at the occupations and companies using literary figures to shill their goods and services). 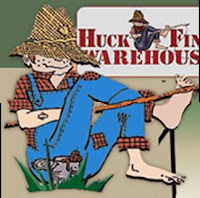 Located in , Huck Finn’s Warehouse prides itself on being the area’s largest retail outlet specializing in any item for the home. It has more than 240,000 square feet selling everything from furniture couches to socket wrenches at 20 to 50 percent off. “Huck prides himself on having the best sales associates and customer service people anywhere!” according to the web site.

We’re not quite sure that free spirited Huck would have settled down for a life of selling garden furniture, but people do strange things when they grow up.

Who better than the Lord of the Apes to start an international information services company? Not only can Tarzan speak English, French and Gorilla, but he’s an expert at hunting and gathering. So when the Tarzan Company promises “to provide services in finding, gathering, and sorting information” it isn’t making hollow promises.

We had no idea that Tom had Celiac Disease and couldn’t digest gluten. It must have made eating Aunt Becky’s apples pies difficult.

A based company that is dedicated to building measurement and monitoring equipment for the television industry. The company’s tagline is: “Excellence in Vision.” One wonders if Hamlet throws himself at the feet of potential customers and mutters things like: “O! what a rogue and peasant slave am I!”

A shoe company that refuses to use any “animal parts or skins” in its products. It has several brands of shoes such as the Bronson, Eliot, Jackson, and the Wallister. He believe the Wallister – with its signature low profile vulcanized outsole – would have proven to be a stealthy shoe for sneaking about an old . Bizarre that a group of peaceful vegan cobblers would name their company after man who stabs his king to death while he slept and then has his wife frame the king’s servants.

It might surprise you to know one of the most treacherous and dangerous pirates in literature opened up “the world’s most famous popular quick-service seafood chain with more than 1,200 restaurants worldwide.” But it’s true. The company’s rather grotesquely named “Buttered Lobster Bits” are now here! Ahoy, Matey!

The savage barbarian from Cimmeria opened an auto transportation company in specializing in shipping other vehicles – quickly and safely (unless, of course, attacked by a rogue wizard – then all bets are off). Conan is fully licensed and insured and if you don’t like it? Well, how would you like a two-handed sword splitting your skull in half?

Apparently when he retired from solving crimes and murders in Victorian England, the world’s greatest detective moved to and opened up a mobile home company. Basically, the lesson here is that an opium addiction will make you nuts. But admittedly the name of the company has a certain ring to it. He did go grow up. And now he’s a bus driver. If you’re running away from Lost Boys , pirates, and responsibilities, we suppose, hiding out on a bus is a good place. But at least Peter is dedicated “to providing the best transportation service in .” Peter will also drive you to Foxwoods Resort and Casino so you can gamble away your cash. What guy!

We all know Jay Gatsby had a great lawn at East Egg. But after the whole disaster with Daisy, the Great Gatsby decided it was time to head to to open a lawn care company. He doesn’t mess around either – bringing the same dogged determination he showcased in Fitzgerald’s novel to his fertilizer and tree/shrub programs. He’ll even help you with erosion control.

When you’re a great white whale – symbolizing man’s quest for God –and you’ve had a rough day at the office killing mad Captain Ahab and sinking the whale ship the Pequod there’s not much left to do – except open a kabob restaurant in Washington D.C. (with branches in the surrounding suburbs). Your menu, of course, will include Fish Kabob (chunks of swordfish marinated in a special house seasoning).

The Legends of Literature - Part One

The Legends of Literature -- Part Two

GFS3 said...
Stealing is such a hard term. How about you just re-purpose my idea? That sounds so much better!
May 11, 2008 1:49 PM
Post a Comment
<< Home
Advertisements
DaRK Buttons