New DaRK
Book Review: "The Brass Verdict" Plays It Safe
5 Questions About: Getting Published
The 12 Best Actresses in Hollywood
Book Review: It's the End of the World As We Know It
12 Signs That You Might Have Been Laid-Off
Winner of OUTLIERS Giveaway Announced!
5 Questions About: Horror Movies
The Toughest SOBs in Fantasy Fiction
Fantastically Bad Cinema: Tropic Thunder
Thoughts from the Shadows: The Thompson Question

A New Name for the Film? "The X-Files: I Smell Like a Rotting Corpse"


How fantastically bad is “The X-Files: I Want to Believe”?

Well, it looks as if director Chris Carter murdered the franchise. It doesn’t feel like one of those “accidental homicides” either. This feels deliberate and mean.

It’s as if Carter waited under a broken streetlight and kidnapped “The X-Files” at knifepoint as it walked home from a fortune telling expo. He tied it up with duct tape and used an oily rag as a gag before shoving it into his car trunk with his golf clubs. He drove it out to an abandoned slaughterhouse on a desolate country road somewhere.

In the silvery moonlight, he chopped “The X-Files” to pieces with a dull, rusty axe: a horrible, messy dismemberment. Then he dug a hole in the cow manure out back and buried the whole bloody mess in a shallow grave – right next to his writing and directing talent.

That’s how bad this movie is.

And I say this from the vantage point of a diehard fan of the long-running FOX-TV series (which ran from 1993 to 2002). It was my favorite show. For those unfamiliar with “The X-Files,” the show was about two FBI agents, Fox Mulder (played by David Duchovny) and Dana Scully (Gillian Anderson), who investigated paranormal crimes. But the real pleasure of the series was its interaction between “Spooky” Mulder and his logical, scientific partner.

“X-Files: I Want to Believe” was supposed to be the comeback movie that revived the franchise. That won’t be happening. Not unless Carter hires the crazy Russian scientists from this film to try and revive the “The X-Files” from the dead.

The premise for “The X-Files: I Want to Believe” was a stand-alone feature. Carter was going to leave behind the space alien mythology of the series and craft one of the series popular “creature features.” These were all-inclusive, single episodes that resembled a mash-up between “The Twilight Zone” and “Kolchak: The Night Stalker.”

Examples from the TV series included having Mulder and Scully investigating Haitian zombies, exorcism, gargoyles, and a plethora of weird serial killers. “X-Files: I Want to Believe” is supposed to be about a serial killer.

There are many problems here – too many to name really. But the real fault lies with the plot, or the lack of a comprehensive one. It has to do with a gay Russian human organ deliveryman who kidnaps women to harvest their body parts – arms, legs, hands, etc. – for his dying husband (they were married in Massachusetts). Why he wants to replace his lover’s anatomy with female body parts when he’s “gay” is never explained.

One of the victims of the deliveryman is a FBI agent – which sets the plot in motion.

We’re also expected to believe this lone, middle-aged deliveryman manages to finance an operation that includes a creepy, but fully functioning hidden laboratory, a staff of rogue Russian surgeons, and lots of expensive medical equipment. He must belong to a great deliveryman union. 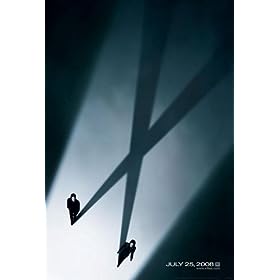 This deliveryman manages to outwit Mulder, Scully, and an enormous task force of FBI agents (led, believe it or not, by Amanda Peet – who looks all of 25 years old). The guy is, apparently, a brilliant criminal mastermind.

The miscues start to fall like rain at this point. Mulder and Scully are now a couple – kind of bored with each other. There’s no passion, no chemistry between them. One of the best parts of the TV series was the smoldering, unspoken passion between them. All gone.

Now retired (and living in a part of Virginia that apparently has more snow than Alaska), the FBI requests Mulder’s return because a pedophile ex-priest is having visions of the kidnappings. Are the visions real?

There’s no mystery, no suspense, and in the end, Mulder proves to be more of liability than an asset. He manages to get an FBI agent killed, get ambushed by the killer, beaten up and drugged by an elderly surgeon, and needs to be rescued by Scully – using a log as her weapon of choice.

All of these missteps are linked together by logic and evidence only found in poorly written movies and bad mystery novels.

The Jewel of the Nile