(Otto knows mysteries. Yes, we’ve been dying to deliver that line. If no one has done so yet, DaRK PaRTY will officially declare Otto Penzler as th

e Mad Monarch of Mystery. As the owner of famous The Mysterious Bookshop in New York City and a publisher who founded the Mysterious in 1975 (now owned by Time Warner) and now has the Otto Penzler line of books with Harcourt, Otto has been a fixture of mystery literature for more than four decades. He is also the editor of “The 50 Greatest Mysteries of All Time” and “101 Greatest Movies of Mystery and Suspense." If that wasn’t enough the Mystery Writers of honored him with the prestigious Ellery Queen Award in 1994 for his exceptional contributions to the publishing field. He also writes “The Crime Scene” column for the New York Sun and edits the Best American Mystery Stories of the Year for Houghton Mifflin. Otto, who we imagined has a raven perched on his shoulder, was graciousness enough to answer our riveting questions about mystery fiction).

DaRK PaRTY: What are the elements of a good mystery story?

Otto: The same requirements as a good novel or story of any kind. Strong characters, realistic dialogue, interesting background, a theme of substance beyond the plotline, with the added requirement of the classic story arc-- beginning, middle, end, with a satisfying denouement.

DP: You are the proprietor of the Mysterious Book Shop in . Why do you think readers are so attracted to mystery stories?

Otto: Mysteries are fairy tales for adults. They mainly depict the battle between the forces of good and the dispensers of evil. In most mystery fiction, there is a comforting restoration of order after the social fabric has been rent, which is satisfying to us as readers, whereas this is not always the case in real life.

DP: You are also the editor of "The 50 Greatest Mysteries of All Time." If you had to narrow the book down to three stories -- which three would you have selected and why?

Otto: Those three stories would change on any given day. But any list, no matter how small or how long, would have to include a Sherlock Holmes story, as he is the single greatest character in the history of literature, a man of wisdom, reason and fairness, as well as being colorful enough because of eccentricities that are not so outré as to make him farcical.

There would also always be a story by Stanley Ellin, as no writer produced the equal of his perfectly polished gems. There are half-a-dozen of his stories that could easily have been included among the top 50. Assuming no difficulty in clearing rights, I would also always be inclined to use a story by Raymond Chandler, one of the handful of most stylistically compelling American writers who ever lived-- in or out of the mystery genre.

DP: Which two writers from the past do you think had the most influence on mystery writing?

Otto: Edgar Allan Poe, as the inventor of the detective story, and Arthur Conan Doyle, as the author who made the genre beloved and, therefore, popular. Make it three, and I'd add Dashiell Hammett, who made the American hard-boiled detective story the dominant sub-genre for nearly a century in terms of talented writers employing the style and substance of his quintessentially American theme of the lone hero doing the necessary thing to set things right, which often seems quixotic to those without a mor 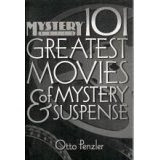 DP: Which mystery writers today do you recommend and why?

There are 15 or 20 or more others who I love, too, in this great platinum age of mystery writing. I like them for different reasons, but they have in common a comfort with the language that allows them to use it in ways that no one else can use it, whether in the poetry of the prose or the creation of characters that will be familiar to readers a hundred years from now.

If you liked this interview try:

So You Want to Be a Private Eye

The 7 Toughest Detectives in Fiction

Robert B. Parker Should Kill Spenser

An Interview with Novelist Kim Harrison

SQT said...
Oh, I love detective novels soooo much. I pick up John Sandford whenever he has a new Prey novel and they never disappoint. Dennis Lehane is fabulous too.

And it probably was Poe that made me love the suspense novel in the first place. He was the master.
February 21, 2008 7:42 PM

Anonymous said...
Hmmm, interesting interview. I like the idea of mysteries as "fairy tales for adults," pitting the forces of good and evil against one another.

I was glad to see some of my favorite mystery authors made his "top 10" list.

GFS3 said...
I've never had the pleasure of going to Otto's, but apparently it is very cool. There's one in Cambridge, MA -- Kate's Mystery Book Shop -- which has just about every mystery book in existence. Lots of authors drop by as well.